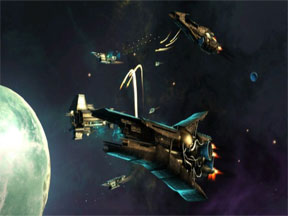 Endless Space is a 4X turn based strategy game set in, you guessed it, space. For those who don’t know, 4X games are a subgenre of strategy video game in which players control an empire and "Explore, Expand, Exploit, and Exterminate." Some of the best known games in the category are the Civilization or Masters of Orion series. It’s a popular subset of gaming, and Endless Space is trying to carve out a niche in this crowded field. Thankfully, it does many things right in its quest for greatness.

In the end, I liked Endless Space, but it took me a while to even begin to grasp the basics of the game. I’m not much for manuals, relying on the game tutorial to give me the basics. In this case the tutorial was not to my liking as it just showed me the interface and pointed out different aspects. I prefer an interactive tutorial where I learn by doing, and some popup information as I mouse over the main options. Thus it took me a while to grasp even the basic concept of building and defending my empire. If I were not reviewing the game, I think I might have given up in frustration. But I was glad ultimately that I didn’t.

After installing the game, I hit the game setup screen which I found to be a bit daunting at first, but after looking it over I setup a fairly simple match at the lowest difficulty level and some basic settings. There are quite a lot of configuration options on the setup screen giving you a huge amount of replay ability at different difficulty levels, with different numbers of empires (players), and galaxies of different shapes, sizes, and age. I did not know much about the different factions so I left that part out. I was playing against the computer, but if you were to join a multiplayer game you could see the other players there. As in most games of this type, each faction has different skills and abilities.’There is also an option for random factions if you like to be surprised, as I do.

The biggest part of this game is the main Interface and Endless Space it is very daunting, and after you figure it out, wonderful. Everything is truly at your fingertips, but at first you are going to be totally lost. Using your scroll wheel you can zoom in and out of the galaxy. On the top left of the screen is the control bar where you have seven areas where you can manage your empire. From the galaxy you can zoom in to look at systems and by clicking you can see the different worlds in the system. Selecting one of those will allow you to see more details about that planet.

I am only going to be able lightly touch on the different aspects of the interface or I could end up writing a novel. From Empire Management you can really get a snap shot of your empire as well as see your approval rating, research, taxes, population growth, and see what is impacting your empire. You can also assign heroes and give the AI priorities. This view can be sorted in a number of different ways.

One of my favorite aspects of this game is how they have done research, which is among the best in the whole 4X genre. In Endless Space there are four completely separate areas to put your eggheads on that all branch off from a central point. So while research builds on research, it is specific to that category. Invest too heavily in one, and the other areas may suffer accordingly as you only have so much brain trust and resources to go around.

The research areas begin with Exploration and Expansion which allows you to navigate faster and farther, unlock new spaceship hulls, and colonize or improve new planet types. The second is Applied Sciences which is all about improving your empire’s economy and sciences, as well as discovering strategic resources. Third is Diplomacy and Trade which helps you in agriculture, diplomacy, and finance, and also helps you manage your citizens. Finally there is Galactic Warfare which allows you to unlock new combat modules to outfit your ships, and makes ships more efficient in combat. Thankfully the ability to zoom in and out really lets you see everything on one screen, as the research areas is very complex.

The Military View and Ship Design window is where you can manage and upgrade your fleets. You can see the location (and clicking will take you there) and condition of each fleet. You can also upgrade your fleets or disband them. Digging deeper you can go into ship design and create new ships or upgrade your ships with the latest advancements. I just wish that upgraded ships looked differently. That would have really put Endless Space in a category of its own, but an advanced dreadnaught with the latest gear and guns looks sadly like any old clunker from the early game. A little flair might have made things cooler.

The Diplomacy window is more or less what you would expect, with trade, negotiations, etc. But I do like how each leader is a hologram and you can see your relationship status using an easy color code shown in the line between you and them. Clicking on a hologram brings up further information about that empire. You really do feel like futuristic leader when you are poking around the diplomacy screen.

Your hero’s and those you can hire are managed on the Academy screen. Heroes bring benefits to your empire by helping a star system or fleet. As Heroes gain experience by working for you, they go up in level, can learn new abilities or skills, but also become more expensive to maintain. Experts always want more money, but they are mostly always worth it.

As you send your ships out exploring new systems for colonization, you will eventually encounter another empire that will not respond to diplomacy, or is just unfortunately sitting in your way. When your ships enter combat you get three points where you can play cards or control their actions, a nice touch that makes combat more than just letting the computers decide everything. These are long range, medium range and melee cards that can help boost your damage, repair your ships or perform special attacks that can really turn the tide in your favor, but your opponents can also play them, so be ready for surprises. There is an option where you can let the AI control your combat, but I stopped using this early on as I found that I won when I controlled things and tended to lose when I did not. So it’s best to hand-run every battle for the best results.

Graphically, Endless Space is not going to tax your system, but it looks good. That’s a nice balance of eye candy and the ability to run smoothly on computers that are not completely gaming rigs. I was however disappointed with the lack of audio. Mostly space is very silent, with just a small library of music playing in the background.

There is a lot you can do with Endless Space if you really want to dive deep into the management of the game. This makes for a really good strategy title with lots and lots of replay value. It’s got a steep learning curve, but once you get to the top, you will find that you really do have control over a real empire, where millions will live or die based on your leadership. It takes a long time to reach that competency point, but for strategy gamers, it’s worth the investment.