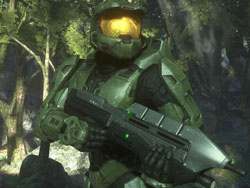 It's a Masterful Ending For The Master Chief

At last, the fight is finished.

After six years of enduring long waits for episodes of the greatest console shooter franchise of all time, the storyline comes to a true end with the release of Halo 3. But like the end of the Star Wars trilogy (yes, even the crappy Episode I,) I feel now like a part of my life has died. I am not at all saying that Halo 3 was a bad game, in fact it’s an amazing title, but to see it all end is kind of sad.

Then again, there’s always Halo Wars when it comes out.

But I’m going off track saying that. Needless to say, Halo 3 was running on a sea of hype. After all, Halo 2 ended up being the largest selling Xbox game ever, even though the story had a lot of holes. Anyone who felt disappointed with the cliffhanger ending of Halo 2, and I know you’re out there, have been wondering what would happen. Would the Prophet of Truth activate all the Halos? Would 343 Guilty Spark return to annoy us? Would the Master Chief actually "finish this fight?" And most importantly, would Halo 3 run away with the title of Game of the Year, or will that fall to another title like BioShock?

Of course we expected that Halo 3 would sell well. By racking up approximately $170 million in sales, beating both the launch of Spider-Man 3 and the last Harry Potter book, the Halo 3 launch will go down as the biggest launch in game history. But unlike Spider-Man 3 (which I hated,) and Harry Potter (which I could care less about,) I actually enjoyed Halo 3 more than I ever thought I would.

Keep in mind that I was one of those who were involved in the Halo 3 Multiplayer Beta, an online experience that truly left me disappointed. Whether it was the same old, same old gameplay, the unimpressive graphics, the lengthy matchmaking process, or being told to "go play Shadowrun instead," the Beta left a bad taste in my mouth. But with the initial disappointments, reports were coming through that the final product would be nothing like the Beta, and they were right on the money.

To start off, the original Xbox-like visuals of the Beta are gone. Everything on the 360 looks sharper and more detailed. For those who ordered the Legendary Edition, take a look at the cut scenes from the first Halo, and then play Halo 3. The difference is like night and day. Where SGM Johnson looked like he had a bad case of lockjaw when he spoke in Halo 1, his speech pattern looks more natural in Halo 3, very realistic. There have been some complaints about Halo 3 running only at "640p" resolution, but upconverted to either 720p or 1080p, and that it is because of the amazing lighting and reflection effects. In my opinion, "so what" if the resolution is lower. It still looks absolutely amazing, far better than what I thought it would after the Beta.

And of course what can be said about the audio? Martin O’Donnell’s legendary soundtrack never sounded better. The same can be said about the voice acting and dialogue. Well, for the most part. While it’s always good to hear the same great characters (Steve Downes/Master Chief, Keith David/Arbiter, and David Sculley/SGM Johnson,) the biggest surprise was hearing Terence Stamp replacing Michael Wincott as the Prophet of Truth. I’m not saying that’s a bad thing, considering the great villain he played in Oblivion, but I will always remember Stamp for being one memorable movie villain with the great line of "KNEEL BEFORE ZOD!" I was just waiting for him to yell out "Kneel before TRUTH!"

And then of course, there’s Cortana. In the previous two games, I have always thought Cortana mumbled a bit too much and can be difficult to understand. But this time, since she is under the possession of the Flood’s Gravemind, and by subliminally speaking and appearing in your mind at the most inopportune time, she gets to the point of being downright annoying. Don’t get me wrong, I think Jen Taylor is an impressive voice actress, and her voice and character are truly loyal of the Halo canon, but even the truest Halo fan will want to yank Cortana permanently out when it’s all over.

The nine chapters that make up the campaign of Halo 3 can be taken on by a single player, but the real fun comes when teaming up with up to three friends over Xbox Live. While the first player will take control of the Master Chief, the second player takes control of the Arbiter and the remaining players control Covenant Elite units. While playing on Normal difficulty it is quite easy for a single player to slam through the storyline, so it is recommended that the difficulty be taken to at least Heroic, but it is in Legendary where the game really shines, providing the ultimate test in first person combat for you and your chosen group of friends.

Covenant forces show no mercy right from the first stage, a sniper filled nightmare when one step means certain death. And as a result, playing with three others is not only recommended, it’s a necessity.

The multiplayer campaign also adds a nice little competition of its own called Metascore. Basically players can either compete or join forces to get the highest score possible on a single stage, and by reaching a certain amount, can earn special achievements.

Of course the standard multiplayer combat is still there. We are talking Slayer, Capture the Flag, Assault (delivering a bomb to the other team’s base,) Territories (capture various points a la Battlefield) and VIP (kill the opposing team’s VIP to score,) but the new Forge mode is a blast in itself. Consisting of standard multiplayer combat, new units and items can be purchased from a limited budget. In doing so, each Forge game can be a unique mode in itself, and it is truly a welcome addition.

Even better is the ability to share files with other Halo 3 players. Clips from both the campaign and multiplayer modes can be recorded, screenshots can be downloaded, and entire missions can be viewed via the game’s Theater mode. This provides a valuable tool to learn how your teammates and foes act and it is just so impressive to watch.

A premium service called Bungie.Net Pro allows storage and sharing of up to 25 files, at the cost of 750 Microsoft Points. In my opinion this will be used only by the truly hardcore Halo 3 fans, and I personally can live without it.

Needless to say, Halo 3 truly finishes the fight with a huge bang. After my disappointment with both Halo 2 and the Multiplayer Beta, my negative feelings have been completely reversed. Even my doubts about multiplayer via Xbox Live seem to have disappeared. Bungie has gone above and beyond to provide the ultimate online experience, while the single player campaign effectively brings the Halo saga, six years in the making, to a complete end.