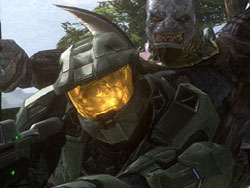 No Better Way To Finish The Fight

It’s not very often a game as big as Halo 3 comes along, so lucky you, you get two reviews for the price of one. One from Todd and one from me, for the definitive GIN guide to the final fight.

The biggest game of the year, the biggest entertainment launch ever and the game that would set the next generation console race on fire. Those are just some of the boasts that Halo 3 has to live up to, but when all is said and done, all we really want to know is, is it any good and does it deliver?

The answer is simply put; yes and hell yes!

Halo 3 pretty much starts where we left off in the last game. Master Chief crash lands in the jungle in a slick looking, if fairly low on drama opening scene. See, this is the thing with Halo 3; it doesn’t grab you by the balls from the very second you pick up a gun. Instead, it manages to slowly build and build, until you suddenly catch yourself in the middle of a kick ass battle that has you whooping with joy. Yes, I did whoop"he hem.

Bungie has obviously invested its time in creating the most polished Halo game to date, rather than meticulously rendering nuts, bolts and blades of grass. In short, Halo 3 doesn’t match up to the likes of Gears of War in terms of eye candy, but still never looks anything short of pretty darned good. There are some lovely lighting effects in the jungle and the textures make it clear this is 360, not Xbox.

However, the faces look a little last generation, I’ve seen better water and I didn’t find myself staring at bushes the way I did on the original Halo. This is no next generation leap in terms of graphics, but at the end of the day, Halo is more than just a pretty picture.

The first thing I really noticed was the banter between the troops is better than ever, with more quips about kill stealing to make the online gamer in us all smile. However, they still haven’t grasped the concept of self-preservation, especially when behind the wheel of a vehicle. Maybe they should lay off the orange soda. With Master Chief behind the wheel, major battle zones become a joy, as they shout things like "get me closer" and "give me a clear shot."

My first two hours of play were fairly steady and familiar territory. Then came The Ark, which will probably go down as one of the classic Halo levels, perhaps even whispered in the same reverent tones as The Silent Cartographer. Enter the first major battle of the game, taking place on a derelict waste ground on the edge of a precipice. Cue Scarab stage left and the first brilliant set piece of Halo 3 – leaving the feeble Scarab encounter in Halo 2 in the shade.

The adrenaline starts pumping as soon as the huge Scarab stamps its authority on the area, filling the entire screen. Then it’s time to drive in close, disable the legs and jump heroically on board to dispense with the enemy, shoot out the weak spot and leap from its exploding corpse. Woo hoo! Now that’s what I call action FPS.

Where Halo 2 lost its way; Halo 3 makes up for it in spades, instead returning to the simplicity and focus of the original. Mission outlines are clear, convoluted storylines play second fiddle to stunning sequences that make sense and flow seamlessly. If its overblown storyline your after, wait for the next MGS because you’re not going to find it here.

The Covenant is the next classic Halo level in the making, complete with amazing dog fight. I spent a good hour replaying this scene because it was just so much fun. Hop in a Hornet to dispense with a flock of Banshees and clear a landing zone by shooting out a couple of Wraiths on the ground. Then get ready for the next great scarab battle.

The weapons and vehicles will all be familiar to Halo fans, but the equipment is a new addition. Equipment such as mines and bubble shields can now be picked up as well as weapons and then deployed as necessary. Although, the shields come in very handy, I expect the trip mines and grav lifts will find their true calling during multiplayer action.

The whole game is littered with nods to the previous two titles. Sometimes this is a good thing, but in the case of the last two levels, not so good. The central section of Halo 3 is the strongest, with things petering out towards the final two levels. That said, the escape from the flood lair is real seat of your pants stuff and I’m not looking forward to playing it on Heroic. I have to say, there was no need to repeat the escape in a Warthog level, especially when the vehicles still handle like utter turds.

In the grand scheme of things, my gripes are mere quibbles and don’t detract from the overall game at all. In fact, there is one overriding thing that is enough on its own to give Halo 3 its five GiN gems. Finally, Bungie has given us varied environments! My number one wish has been granted.

The level design of Halo 3 is second to none. Even when we enter ships and control stations, gone are the days of bland, featureless corridors. Instead we’re given sprawling landscapes with glorious painterly skies. Now we enter vast rooms with huge windows at one end, or columns with sculptural details. Corridors explode, sending panels flying towards the screen or tentacles drip down from the ceiling. Halo’s never looked better in terms of environment, making it the most polished of the series.

Yes, Halo 3 is more of the same (so no bad thing then) and no, it doesn’t deliver next generation graphics, but it does present a highly accomplished sequel to the one of the best FPS titles ever to grace the gaming world.

In short, this is the best Halo ever!