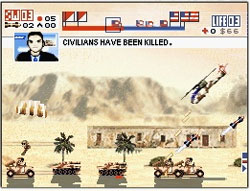 War vets are speaking out against war games. America’s Army, the game used as a recruitment tool for the US Army has been scrutinized by vets as representing war as a game, something it obviously is not. I strongly doubt, however, that too many army men are sitting around shooting up stuff with their DS’s, so Glory Days 2 will probably fly under their radar. Even if they did pick it up, vets would more likely be sincerely moved than upset by this game.

Glory Days combines strategy, action, and tactical aspects to a side scrolling war game which takes place over several years, represented by different pilots who all communicate with loved ones through heartfelt letters that precede each of the campaign missions.

Other than these vague letters which tell that they are fighting and scared, there is really no mention as to what war they are in or why they are fighting; so much for some historical reference. The focus of the game is simply on winning the battles, with each pilot repeatedly noting their duty to family and country.

The fun in Glory Days 2 is the amount of work and resulting difficulty in achieving victory. Campaign mode consists of several levels in which it is your mission to help secure bunkers as your troops move forward to a main enemy bunker which, once destroyed by your tanks, secures victory.

You spend your time either flying a helicopter or a jet to drop bombs on enemy tanks and jeeps and shoot down attacking jets and choppers. The top screen shows whatever flying machine you are controlling, while the bottom shows your front lines so you can see your men battling.

The ground fighting provides a good bit of strategy to the game as you control the deployment of your tanks, troops, and jeeps.

Along the way you have the chance to save civilians with your chopper providing money towards your ability in the game, along with the sense of honor you receive for helping out your fellow man.

The abilities you gain increase as you progress, adding special weapons like air strikes and remote rockets and giving you more advanced vehicles in the air and on the ground. Controlling all of this becomes increasingly more difficult, creating a hectic game that requires a good deal of concentration to keep everything in order and help move your men forward.

All this can be done with or without the stylus, depending on how you like to control your flying. With stylus in hand, it is difficult to use your deployment menu which is used through the R button. Seeing as you constantly have to send out more men to replace your destroyed troops due to the onslaught from enemy tanks, this makes the stylus the more frustrating way to play for most of the missions.

More frustrating is fighting with your pilot while trying to fly around. The DS screen is small and planes and choppers are fast, equaling difficult fighting when you’re trying to shoot down planes which aren’t even on your screen and bombard tanks which are tough to hit.

Glory Days 2 does help you out by providing radar and target indicators, removing the impossible from these challenges, and they can be achieved, but picking up a special weapon is cheerfully welcomed when you see ten armored tanks about to reach your bunker.

Along with your campaign, Glory Days also provides the customizable battle modes which are the campaign missions in which you can control all the details, from what vehicles are available to the weather. And don’t forget to pick up a copy of the game for your mom since there is the multiplayer mode so you can link up, something I didn’t get to try out, but I imagine it’d help out with the slow demise of board games.

As for the looks of the game, it’s a DS game consisting of 2D side scrolling, so there’s not a lot of beauty in here, just enough to let you know what’s going on. There are a few variations in location, cheaply provided by changing the color variations to make it look more like a beach or desert or forest. The music is quality schemed honor music; those tunes found in most war games that are supposed to provoke your sense of duty. It’s not bad.

Glory Days 2 is a fun game. It’s pretty challenging and puts a lot of control in your hands as a battalion leader while letting you go on air raids as a pilot. The battles have an addicting quality with a lot of fighting, and with the battle mode you can set up your mission however you want it. I don’t know that the game lives up to its name, though I can’t see why anyone would call war time the glory days in the first place, but this game has appeal. So if you’re a veteran, don’t hate, go pick it up and recall all your memories.