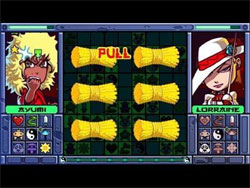 I was never really into crossword puzzles or the word scramble, but when Sudoku started showing up in newspapers I was game. They’re addicting and give you some false sense that you’re doing some sort of math since you’re using numbers.

But with the slew of Sudoku games recently coming out for the DS, it makes you wonder who’s paying up good video game money for these puzzles they can get for free everywhere else. Then there’s this game, Zendoku, already trying to reinvent the game to give it the edge to really make it worth putting into arcade style extravagance.

Zendoku is battle through Sudoku. It’s putting an opponent against you while you stress over figuring out whether a 9 or a 6 goes in that tile. You play as one of several characters who represent different martial art styles from around the world attempting to reach enlightenment. Obviously there’s no better way to accomplished this than Sudoku.

But to be honest, there is actually some fun to this attempt at a new Sudoku game. Zendoku sends you on your quest for enlightenment by giving you your puzzle and as you solve it you send attacks, shown on a little line above your board, at your opponent.

Attacks are sent when you finish a line vertically, horizontally, a 3×3 square, or place all of a symbol on the board. You can also send help to your opponent by filling in a tile incorrectly.

The fun extra bit that Zendoku adds to the game is that when your opponent sends an attack at you have a little distraction that you have to accomplish to get back to your game. These distractions are similar to the short blurbs of game found in the Warioware games. Things like wiping flower petals off your board with the stylus, blocking punches thrown by your opponent, and blowing mice off your screen through the microphone all prevent you from completing your puzzle. You go through several of these battles to reach the goal of super Dojo.

There is one serious annoyance in this quest in that the normal numbers 1 through 9 of Sudoku are replaced with random symbols like the ying-yang, a panda face, a heart, etc. They seem like a nice touch, but they make the game more difficult since it is hard to recognize which symbols are missing like you can with the numbers. This is really the only problem that bugs the game.

Other than that it’s just a short quest to victory, but there are other things to do with the game.

There is a time trial and race mode called Zen, where you can either time yourself or race the clock. Also, you can just play the short minigames in a training mode called Attack Box, where you can unlock new attacks which are just more minigames to play during battle.

If you just want to play regular old Sudoku, there is that mode too, where the annoying symbols are replaced by the normal numbers. It claims to be an infinite puzzle generator so I guess you won’t run out of puzzles.

And don’t forget the multiplayer, it’s there too. You can link up and do battle or have a co-op where apparently you each control a couple of the symbols to place on the board. I didn’t get to try it because I don’t have any friends. At least none that own this game.

Not much to say for graphics. It’s a puzzle game, and I imagine you know what Sudoku looks like. It’s more colorful, I guess. The characters are pretty dumb, but unimportant; just there to add a little comedy and there are quite a few things to laugh at which is good. This music is one short track on repeat that is an Eastern kick, sounds nice, but will probably get on your nerves after a bit.

So, for all the Sudoku fanatics out there, I’d say buy it but you probably already have.

For everyone else, if you need something quick to do in between your Mario Kart racing, this might be worth it. It’s fun and the bits of minigame add a nice touch of quirkiness to this bourgeoning puzzle game to make it worth getting.