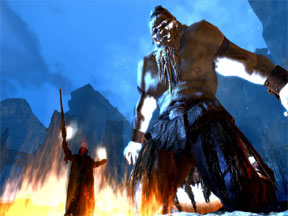 This Is Too Much Fun To Be Free

I play a lot of massively multiplayer online games. In fact, I think I probably spend more time with them than any other genre if you added it all up. Sadly, I missed the Conan MMO when it first came out. Chella pulled the review assignment for that one, and she seemed to have a pretty good time lopping off the heads of bad guys. So, when Conan became Age of Conan: Unchained, and went free to play, I figured it was a great time to jump in. And thankfully, I was right.

There are a wide variety of character types to play, all of which are represented in the books and movies. There is everything from a demonologist to a thief to a dual-wielding assassin. Being my first time in the game, I went for the obvious choice: a huge mountain of a man barbarian.

The game begins with one of the best tutorials I’ve ever found in an MMO, a critical element if new players dipping their toes in the free waters are going to stick around. Although, compared to most MMOs, Conan is pretty easy to play, at least at first. When you first start to level up, a new skill pops into your hot key window. You simply read what it does and use it when needed. There is no need to visit a trainer or buy the skill or anything like that. At first you won’t even have to worry about spending points on this or that, though eventually you will be able to improve your character with skills like Hide, Climb and Bandaging. And you can customize your character in different ways using a skill tree, so your barbarian is going to be different than the others out there.

It’s no surprise that Conan excels at combat like no other MMO I’ve ever played. It’s not just about mashing buttons. You have to keep your wits in combat and pound your enemy where he or she is weakest. You see, while fighting there are little brackets that show which of three sides (left, right or straight ahead) your enemy is defending. Most combat begins with one bracket on each side, for a measured defense. But it quickly shifts in reaction to your attacks. If you knock someone down with a mighty blow for example, their focus on defense almost always shifts forward. That is the time you want to strike to their left or right. You need to hit them where they aren’t blocking, and your standard attacks can be directed front, left or right at will. Yes, you still have to worry about stamina for your special moves, but it’s much more about feeling the combat and making the right moves. For me it got to the point where I could guess what an enemy would do, and have the appropriate attack ready to meet them.

As you level up, you gain access to combo moves. This ramps up the difficulty a bit but also makes the game more fun. Whenever you use a special move, a combo window will open showing you the follow-up movies needed to execute a perfect mega-blow. As you further level, these get more complex. And you really want to hit them because they allow for massive damage. And if they are missed, there is a long cool-down, so you might not get another chance in the same fight. I liked this situational awareness add-on to the standard MMO combat.

The whole head-lopping thing is actually only one special ending move which can happen in combat. There are quite a few, mostly depending on the weapon or spell used. The electricity fatality is particularly gruesome, though I enjoyed the death blows with my two-handed club, crushing their kneecap and then following through with not so nice taps to the head. It adds a bit of spice to the game, and not every combat will have them. In fact, because they are so rare, it makes them more interesting. You can however turn gore off if you choose. Nice that it’s an option for the less bloodthirsty among us.

Getting killed, as in any MMO, is a part of the game. I was first slain when I misread my quest guide map and walked into a dungeon that was well over my head. It was my fault. I mistook some red lava on the mini-map for my red quest guide focus. I should have known something was wrong. Anyway, it ended with me getting clobbered by the first monster I ran across. But death did not stop me for long. I resurrected and was back in the game in no time. In the tutorial areas there does not seem to be any death penalty. However, once you get to the game there is a minor debuff that affects you for a while unless you go back and collect your tombstone. Still, it’s pretty minor.

Another thing you will notice about Conan pretty quickly is that this is an adult MMO, and not just because of the violence. The female characters in the game are incredibly sexy, including the flesh-worker you rescue as part of the tutorial. But adult themes are present throughout the world. This is Conan after all, and if you know the world, especially from the books (though the last movie touched on this a bit too) you know that the people who live there have a different attitude about sex than most of our prudish modern societies. It’s not like its hardcore or anything, but sex is hinted at and addressed more than most MMOs, or most games for that matter.

Graphically, the game looks great. MMOs have to strike a balance between pretty and performance, and Conan did that for me on a fairly high-end system, but which was hardly a supercomputer. Monsters and other players looked shaded at far distances if a lot was going on at the same time, but snapped to graphical perfection when they got close. Some of the water effects are quite beautiful too. I spent a good few minutes watching a river run into a sewer grate. Really, it was pretty, especially if you are lucky enough to use Direct X10 graphics. You can swim in Conan too, and even dive down underwater. There is a small treasure you can find inside the water in the first tutorial area. So go grab it.

I was also impressed with the sound of Conan. Environmental noises were really good, and the music was nice. The game knows when you are in a particularly tough battle and plays more dramatic music to spur you along. All of the NPCs in the tutorial area have voices, and sound great, so kudos to the voice actors. Unfortunately, that does not happen once you get out in the main game, so be ready to read a lot. It would be nice if everyone spoke, but having that in an MMO is a huge rarity.

The trickiest part about doing a free MMO is figuring out the right free/paid balance. I’ve seen some games that were too stingy with the free content and others that give away so much that I wonder how they actually make money and stay in business (more than a few haven’t). Age of Conan: Unchained strikes a pretty good balance. As a free player, I had access to all the main content and quite a few dungeons. I played up past level 20 without hurting for things to do. I was under some restrictions, like only having 50 percent of the bank space or two character slots, but nothing that prevented me from enjoying the game. There are content packs available to unlock more. You can buy adventures al la cart that way. Or, you can become a premium subscriber, which unlocks everything. If you choose to become a subscriber, you also get free Funcom points each month, which can be used to buy in-game items in the online store. For the full subscription, prices range from $14.99 for a single month, to $98.93 for a 12-month subscription, which works out to a very economical $8.25 per moth.

The Funcom store has a variety of neat things that are helpful but not game unbalancing. Some of them are cosmetic while others help you travel faster or give experience-gaining and other perks. There is a nice selection represented.

One final note is that I mostly played on the player vs. enemy servers, where players can’t attack each other. There are also player vs. player servers. Personally I’m not a huge fan of PvP, but I know a lot of people are, so I dove in to give them a try. And I actually had a pretty good time. Finding a guild is a huge advantage, and given the nature of the PvP world, many guilds are happy to recruit new players and shelter them until they can start killing. Everyone we met was surprisingly friendly, and provided advice, escorts and better gear that we really needed.

And the PvP worlds are not huge battle-pits either. You can still explore and do all the quests, but know that you can be attacked, and not just by monsters. I won’t say I’m converted to PvP, but I had more fun with it than I expected, and it did seem to fit in with the dark nature of the Conan world.

Also, I was not able to get into crafting items, as that requires a level 40 character. Other high-level content includes the ability to use mounts and participate in siege warfare. You can also run or be a part of a guild, and build up cities, which sounds like a lot of fun. So if you fall in love with the gritty Conan world, you’ll have a lot of rewards as you devote more and more time to the game.

With a good amount of free content and a very unique action-packed MMO experience, there really is no reason not to jump into the world of Age of Conan: Unchained. You know you want to let your inner-barbarian out. Why not do it with a 4.5 GiN Gem rated MMO? Heads will roll, and they probably won’t be yours.