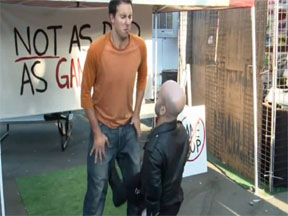 What’s worse than a kick in the nuts? Just ask that kid walking out of GameStop with the sour look on his face how much money he got for his hardly used copy of Black Ops… Ask him why he doesn’t have a new game in his hands… The answer is simple. He left the mall with nothing more than self-pity and a dipped cone because that’s all he could afford with the money he got from GameStop. Now, if only he had thought about another option like Glyde.com.

A Silicon Valley start-up gaining ground in the gamer world, Glyde lets gamers sell their used video games online in an Ebay-like exchange and gives back 2 to 3 times more money than GameStop typically does. They also pride themselves on an easy user experience and have recently added consumer electronics to their inventory. If only our sullen friend had known, he’d be playing Skyrim instead of eating a dipped cone. What’s worse-he’s not alone.

Glyde.com noticed that this anti-GameStop trend has been gaining some popularity online (on Twitter, Facebook and YouTube, in blogs and forums like Reddit and Something Awful) and thought it would be fun to produce a playful video that points out people’s frustration with GameStop. The result: nut kicking, a midget, and one man on a serious mission to prove his hatred for GameStop to YouTube and the world.

Checkout the video above, and next time you’re about to sell back your used games, think about an option that doesn’t leave you satisfying the feeling of emptiness with ice cream.