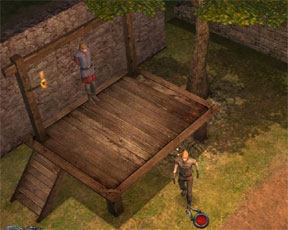 It was a dark and stormy night, just like all the great classic horror adventure games of yesteryear. Daemonica will take you back to that classic era of computer adventure games, though with some nice modern twists like realistic weather and lighting effects.

You play Nicholas Farepoynt, an investigator of sorts in Medieval England. Nicholas has a big secret however, because he is also known as Haresh al-Dorem, one who can speak with the dead. Speaking with dead people helps you uncover murders and other deviants, though to say your methods would not meet the approval of the locals is an understatement. So you hunt your murderers from the shadows.

The interface for the game is a classic top down view. Simply click where you want to explore, to talk to people, pick up objects or even fight – the game will pick the correct action for you. You are hired to come to an out of the way town where a young girl has been murdered. The mayor provides you with a house and even has the windows boarded up to keep prying eyes out of your way. As you work the dead begin to pile up, and the town becomes increasingly frightened and suspicious, making your work even more difficult. It also adds a very nice touch to the creepy atmosphere of the game world.

You investigate by talking with the people who live in town and by picking up clues at crime scenes. You also happen to be an alchemist and can create various potions – like a sleeping drink you can use to remove annoying guards for example – by collecting herbs found growing wild throughout the land.

When it comes time to speak with a dead person, you have to take their body down to your cellar and hang them up there – not exactly the kind of thing to endear you to the locals. Then you have to drink a potion that just about kills you. But before you pass over into the spirit world, you use the secret language of Daemonica to command the forces there. This part of the game is a bit like a puzzle, because you have to know how the person you want to speak with died, when they were born and what would attract them. One wrong answer and you are dead yourself.

In the living world you sometimes have to fight, which is done with simple clicks. Combat is the weakest part of this mystery adventure, but thankfully does not occur often and with a little bit of thought, can mostly be avoided.

Daemonica is a creepy mystery game that is easy to play but difficult to solve. It will have you doing some very bad things, all in the name of good.