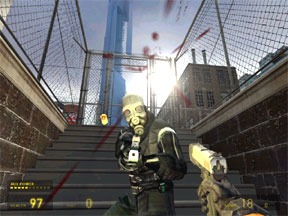 Half-Life 2 is one of a handful of games that seem to take years and years to finally land in the hands of hopeful gamers. Some titles that fall into that category like Daikatana or Stonekeep are not up to expectations. And some like Doom 3 certainly are. Thankfully, Half-life 2 falls into the latter group.

Right from the start of the adventure, you are going to be hooked. You play Gordon Freeman, the hero of sorts from the original title. Like most games (there have been several add-on adventures over the years) in the Half-Life series, you start on a train of some type. However, this time you have apparently just materialized out of thin air, after being given a lecture of sorts from your old nemesis, the old Xfiles-looking guy in the black suit. You don’t really know why you were put on the train, but don’t have too long to think about your fate as it pulls into the station.

It seems the world has surrendered to the alien invasion unleashed in the original adventure. Now people are forced to live in rundown cities that are more like internment camps than anything else. Random beatings from the gasmask-wearing guards and disappearances are common. You spend a good part of the tutorial level getting pushed around by the guards, forced to do menial tasks like picking up trash. The entire time, you are just itching for when you get a weapon, which you know will signal payback time.

The graphics in the game are top notch. People are all intricately detailed with good facial expressions and good voice acting backing them up. I took a half gem off the graphics score because while the people are detailed, the models are very limited. There are only a handful of people models, so you will fairly often find two people who look exactly alike standing together, especially later in the game when you get to lead squads. There is the black guy with the scraggly beard, the pretty girl with short brown hair, the tired-looking old guy and not too many others.

Main characters look unique though, and you will find a lot of old friends from previous games in the series, plus some new ones.

Once the action gets going, it never quits. The varied environments in the game are one of its biggest features. You will find yourself fighting in haunted towns, crawling through sewers, out on the beach, inside a prison and even working your way across a high railroad bridge from the underside where every misstep could be your last.

Several levels in the game even revolve around vehicles. This was something I was not expecting, but turned out to be one of the most fun parts of the game. You will quickly be able to jump into an airboat, which can travel over water or on land, though it moves on land slower than in the water.

The airboat is really awesome. You spend much of your time without even a weapon, which makes it really interesting when attack helicopters come after you. To survive you have to pull off some fancy driving manoeuvres and play hide and seek with your hunter under bridges and overpasses, darting out when you think the coast is clear. But don’t worry; you will be given the ability to fight back soon enough.

Later in the game you will be given a dune buggy for some Mad Max-style adventure over a post apocalypse highway of death.

Half-Life 2 borrows a good deal from popular movies and games. The haunted level is called Ravenholm, which I would guess is a nod to the popular Dungeons and Dragons world of Ravenloft. Oh, and that dune buggy level I talked about starts out like a scene from Starship Troopers. You will see what I mean when you play.

The game does about everything it can to keep you from getting bored with the same old thing. Besides the vehicle levels, which are extensive, you also have levels where you are commanding squads of people and sometimes even monsters. While this is no Rogue Spear title, successful use of your squad will help keep you alive and serves to add variety to the game.

There is even something here for you puzzle gamers, cause there are several throughout your adventure. For example, you might run into a ramp connected to a pulley system that requires you to find bricks to weight one end, or a used washing machine or other heavy objects. This also tends to break up the monotony of just running and gunning all the time, which is the one big curse of most shooters.

The game ships with Counterstrike and also half-life deathmatch, which is a great edition for those of you who love multiplay.

Some of you might be asking why the gameplay ranking is lower than the others. While it is true that the game runs smoothly and the AI is very smart – baddies will throw grenades to soften up a room and then charge in behind it – the main problem I have with the game is the delivery system.

You can’t just use the five CDs to install the game. You have to have an Internet connection, and I would argue a broadband one for it to work right, or you can’t play the game. After you go through a long five disk install process, you then have to register on Valve’s Stream service. The service pushes automatic updates to your client. If you don’t have an Internet connection, you can’t play.

While this is a necessary evil for massively multiplayer games that exist server-side, there is no reason whatsoever for this to be the case with a single player game. The stream service runs in your system tray, even when you don’t have any intention of playing the game. Besides draining memory, this opens up a port into your computer that can be exploited. And Valve uses this opening to flood messages about the game.

Since I installed the game, I have found four messages forced onto my system. They are about pending updates to the game, contests for level designers and other company messages that I don’t have any interest in. If I wanted to flood my system with adware, I would have installed Kazaa. I do play EverQuest II online and Sony does not feel the need to create a resident program in my system tray or flood me with messages about their title. Valve shouldn’t either.

The Valve Stream service is helpful if you want to play Counterstrike or a Half-Life 2 deathmatch, but should be an OPTIONAL setting. And secondly, it should ONLY be activated when you run the game, not run as an always-on program in your task bar. I can’t stress enough how bad the idea of the Stream service is. In fact, with the forced ads, it borders on criminal in my opinion.

If you can forgive the horribly executed Stream service, the game itself is a lot of fun. Unlike Doom 3, which quickly got boring for me, Half-Life 2 with its varied levels and terrain stayed fun from beginning to end. It earns 4 + GiN Gems overall.