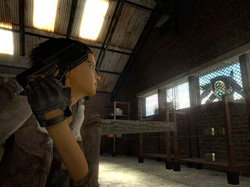 There are moments when you just sit back and thank God that you are a gamer. Half-Life 2 Episode Two has several.

For a game that was supposed to be released last Christmas, and for an episodic six hour adventure at that, it’s been a long wait for Half-Life 2 Episode Two. We were shocked when Valve told us that the game was not being released as a standalone episode as originally planned, but instead part of something called The Orange Box. (You can still get Episode 2 alone from Valve’s Steam online service, but would be missing out on Team Fortress 2 and Portal, both really good titles in their own right.) So Episode 2 had a lot going against it in terms of high expectations going into this review. Thankfully, it more than exceeded those expectations, a true rarity in this over-hyped industry.

Most of this review will center on Episode 2, which we consider to be the star of The Orange Box, though we will go over Team Fortress 2 and the enigmatic Portal briefly as well. You also get Episode One and a full version of Half-Life 2 in the box as well, just in case you missed them.

Episode Two picks up right where Episode One left off, and those of you who remember our review of that game know that it scored pretty well, other than being a little short and concentrating too much on the gravity gun. Episode Two finds you and awesome sidekick Alyx on a wrecked train in the middle of nowhere. And yes, you start with the gravity gun again, but quickly find new weapons this time (if you are good about searching everywhere that is.)

Of course the Combine is still after you. In fact, they are really after you because of what you did in Episode 1. Like the core game, and somewhat with Episode 1, Episode 2 is divided into a series of really good sections, almost like mini-games. You never get the chance to get bored with one section because just when you are thinking that you might, the gameplay changes significantly.

For example, you might be on foot for an extended period of time traveling alone, and suddenly you will be partnered with someone. Or you might be on foot and find a vehicle. After driving for a while dodging choppers and running over zombies, you will be given a task that forces you back out of the car. And there are major battles punctuated throughout the game, so that you will end up fighting a boss type creature or defending an area to further break things up a bit. There are even a few puzzle type quests, where you can see some items but need to figure out a way to get to them, or where you know they are there (due to a special radar you get at one point in the game) but can’t see them. Everything to keep the gameplay fresh is done here.

Another way to keep you interested is through the awarding of achievements. Whenever you do something significant a pop-up window lets you know about the achievement you earned. For example, you get an award for every five zombies you mow down with your car. Not only does this make you feel good when you do something cool, it encourages you to do some more mayhem. I doubled back into areas I had driven through just to try and hit a few more zombies. From the menu, you can view all the achievements you have earned, and see the ones you are missing.

Most of the enemies you find in the new episode are ones you have encountered before, but there are a few new ones. The toughest is The Hunter, which is sort of like a miniature version of those three legged robots you see marching around knocking down buildings. These new ones are just a bit larger than you and pack quite a punch. They shoot out these little blue grenades with long electrified strings that run back to the Hunter. When the grenades are charged, or overcharged, they explode. The good news is that you have a little bit of time to get out of the way.

The AI has improved significantly. Not only do helpers stay out of your way, but all the NPCs you meet like to talk to one another. They tell jokes, make light of their current situation and even get into arguments with one another. You really will feel like you are there just listening to all the people around you talk. And Alyx looks as real as ever, and acts like it too. You can even play little jokes on her, like tricking her to get out of the car and then driving off, which makes her laugh when you finally let her back in. That’s a pretty impressive AI.

You can solve Episode 2 in about six hours, though it took me more like eight trying to get more achievements and exploring every nook and cranny of the devastated landscapes. Episode 2 was more than worth the wait, though I hope Episode 3 comes out sooner than later. The episodes were supposed to give us something to chew on before Half-Life 3 came out, but I think most people are actually looking forward to the new episodes more now.

Also in the box is Team Fortress 2. I was a big fan of the original Team Fortress because of the small but diverse set of characters, like the engineer who could build and maintain turrets or the heavy weapons guy you could put a ton of fire into an area. Needless to say all the characters have returned with vastly improved looks (a bit cartoonish actually) and improved powers. The multiplayer maps are great and everyone will have fun gravitating to the character that best matches their play style.

Besides the core game and Episode 1, there is also a new game called Portal in the box. Portal is a bit of an action puzzle game, and is quite unusual. The core of the gameplay is the ability to open up a portal where you will emerge and then another portal to jump into, which instantly takes you back to the first one.

And then you are presented with a map with a big wall in the middle, for example. The trick is to find a high spot and then jump down into a portal where the other end (the receiving portal) is aimed up near the top of the wall. That way your falling momentum carries through and you soar into the one portal and come out the other end at a high rate of speed, hopefully enough to sail over the wall. Other puzzles include having to drop a crate onto a turret, which can be done by opening up the receiving portal in the ceiling over the gun, and then opening up a portal under something heavy.

Portal is a neat game, and there have been rumors that Half-Life 3 or even Episode 3 may make extensive use of it. I kind of hope this is not the case. While Portal is cool, I really see it as a separate game. Like the gravity gun, it’s a cool effect, but basing too much of a game on it might cause a bit of an Episode 1 type backlash. For those who love Portal, know that there are a ton of puzzles to play with it, and for those that don’t, simply skip it.

The Orange Box packs a lot of value into a small package. You will certainly feel like you got your money’s worth, especially if you missed Episode 1 or even the core Half-Life 2 game. This orange is absolutely worth your green.