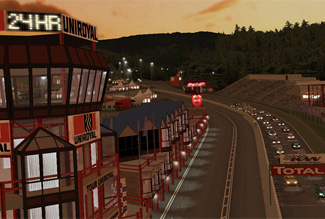 Thank you GTR. You have restored my faith in the racing genre.

I’m sure that I am not in the minority when I say that I was seriously disappointed with Gran Turismo 4. Here we have a game that has been talked about for years, suffering through constant delays, and the removal of its key selling point: the online play. In the end we are left with a game that plays almost identical to the previous titles, where the goal is to purchase a car, max out all of its upgrades, and then blaze by the other five racers. Not only that, but GT4’s AI was the same old "pack driving" mold that has been around since the first game. Even worse, the lack of any damage model whatsoever removed any realism left in the series.

Microsoft capitalized on Sony’s missteps when it released Forza Motorsport back in April. While it too was heavily delayed, Forza at least carried a damage engine that would actually impact your car’s performance, as well as a fairly competitive AI. But the biggest advantage over GT4 was online play via Xbox Live. Nonetheless, despite Forza’s improvements, it still wasn’t enough to satisfy true GT racing fans.

However, there is now relief, as GTR has been released here in the States after a successful run in Europe. And for someone like myself who is used to simplified GT racers (GT4 and Forza), as well as NASCAR based simulators, GTR is a welcome change and a breath of fresh air.

10Tacle’s GTR is an accurate depiction of the FIA GT series, with ten courses and a total of 70 racers, consisting of teams from developers such as Porsche, Lamborghini, Lotus, Lister, Ferrari, and Saleen.

Now while the FIA GT series may not be familiar to US race fans (who are more accustomed to IRL and NASCAR), anyone who follows the Formula 1 circuit will be familiar with some of the courses (Monza, Italy and Cataluyna, Spain for example), and thus will be able to race courses they know.

One of the biggest complaints I have had with previous GT games was the small field to race against. Not this time, as GTR features a regulation field of cars, and unlike the brain dead AI found in GT4, these cars can put up a fight. Featuring some of the best AI I have ever fought against in a racing game, computer opponents will block your path, take the best racing line, and do whatever it takes to make your attempts at victory a real challenge.

That challenge is increased with an amazing physics engine. As mentioned before, Forza used damage modeling as a deterrent to your driving skills. GTR takes it further by actually implementing weather effects and road conditions. And as far as weather is concerned, it’s amazing to see dynamic weather take effect. Rain can affect the race at any moment, and anyone who drives a car knows that the road is the most slippery in the few moments when a rainfall starts as all the oil and debris on the road surface is stirred up, but before it really gets washed away. Seeing this in action is impressive, and adds to the overall realism.

However, for those who will find all of this realism too much to handle, there is also an arcade mode and a Semi Pro mode that will help them get into the game better. This is a welcome addition and will bring in fans who don’t play race games all the time.

Visually the game is amazing. In fact, you could easily call it stunning. All of the car models are rendered beautifully, and when added with the dynamic lighting and weather system, PLUS a realistic damage model, it looks even more impressive.

Better yet, even with a massive field of cars on screen, there is hardly any performance hiccups at all. Aural-wise, the game screams high quality. Each car has been specifically recorded so each racer sounds unique. While racing you can actually tell which car is approaching by the engine sound. And you tell which side they are trying to pass on by just listening.

It is worth noting that GTR is a PC and not a console game. Racing on the PC has not been the most stellar of categories in the past, but with a quality title like GTR that runs this great and looks this good, that could all change.

In fact, GTR has already received major accolades in Europe, and I can see that trend continuing here in the States. In fact, GTR is the racing game that I wanted Gran Turismo 4 to be. Already 10Tacle and SIMBIN, and their US Partner Viva Media, are working on getting the sequel, GT Legends, into our hands. If GTR is any indication of what that title will be like, but with the addition of all those cool classic cars, I think that the GTR series and the companies involved will be around for a long time. Certainly, this is the standard that all other racing games will be judged on in the future.