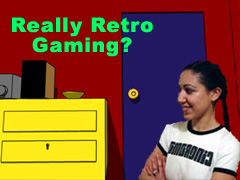 Sometimes the simple things in life are the best. And this is never truer than when it refers to games.

Last week I was minding my own business, getting on with some work"it does happen occasionally. I got a call from a freelance colleague who was cursing about a game she'd been emailed. After a chat about work, life the universe and everything I put the phone down, only to be greeted by an email containing said game.

The email was entitled "Warning this is addictive"do it when you have some time". Paying no heed I opened the email and clicked on the link for the game. I mean how addictive can a simple bit of freeware be right!? I'm an experienced gamer, it takes more than mere trifles such as this to get me hooked.

The game is called Crimson Room and is the creation of Toshimitsu Takagi. It starts with simple text explaining where you are, but not why or how. You awake in a room with a hangover, but can't get out. Now can you guess what the point of the game is dear play chums?

That's right, you have to escape from the room.

It's a simple point and click, but its simplicity is the joy. The room is, as the title suggests, is red. The graphics are so simple that you half expect Hello Kitty to pop up somewhere. We're talking flat, primary colors and about six objects drawn with the simplest of black lines.

My email came with instructions; find 13 items and escape. Pah! Simple I thought. There's a chest of drawers, a bed, a curtain and a stereo"not exactly a room of Broken Sword proportions.

So I started clicking and pointing and soon had a collection of 10 items. According to the email, this gives me a normal IQ. Anything more than 10 items would put me amongst the IQ elite.

The gauntlet was thrown and my brain flicked into point and click mode. I must point out at this stage, I did have work to do. But somehow it seemed less important than getting out of this imaginary room.

Considering the simplicity and kindergarten styling of the graphics, there's a sinister atmosphere to Crimson Room. It's all a bit reminiscent of Old Boy. Is it really a hangover? We know it's not our own room and the text says it's not a hotel room, so what is it? Why are we locked inside?

It could all be very innocent. Maybe we were horrendously drunk and people thought, lock them in the spare room until they've sobered up. But if that is the case where are they now?

No I'm thinking of something more along the lines of a Kafka novella. There's a sinister underbelly at work here. If it were innocent, it would be called Red Room. But Crimson Room has connotations of evil I tell you, evil!

So, you see, after one hour I was still hooked. I finally returned to my work and thought I'd give myself a little rest. The last three items were eluding me. Then I received an email from the colleague who'd started the whole thing saying she'd got 11 items.

Well, that was it. I returned to the game forthwith. And the scales fell from my eyes. Within 15 minutes I'd found all 13 items (so my reputation as a genius was secured) and escaped from the room.

There's just no better feeling than having solved and impossibly obtuse puzzle. The puzzles don't really make much sense even when solved, but the sense of satisfaction is still sky high.

And the best bit is"you escape into another room! Brilliant!

A little investigation has revealed that Takagi's created a Viridian Room and a Blue Room too. Head to http://www.takagism.net/ to enjoy some proper head scratching point and click fun.

If only we could download them onto the Nintendo DS, our lives would never be dull again.