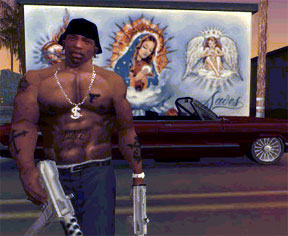 Last year I said Rockstar went too far when they released Manhunt. I was wrong. NOW Rockstar has gone too far.

However, it was not the intense violence of San Andreas that sent Rockstar past the boiling point, but rather the fact that they packed so much stuff to do on a double layer DVD that it will be impossible for them to surpass.

San Andreas was the final city in the original Grand Theft Auto, after Liberty City and Vice City. In the new trilogy, San Andreas is the middle ground. Set in 1992, Carl "CJ" Johnson is another arrival from Liberty City. This time, he is returning to the city of Los Santos after a five year sabbatical due to the death of his brother Brian. Receiving a call from his brother, Sweet, CJ learns that his mother was killed and he is in Los Santos to bury her.

Upon arrival to Los Santos however, he is stopped by two crooked cops, Frank Tenpenney (Samuel L. Jackson, Pulp Fiction) and Eddie Polaski (Chris Penn, Resevoir Dogs). Representing the corrupt CRASH team, they beat down CJ and haul him away with his money and gear left behind. After a short ride, he is framed for the murder of a police officer and dumped off on the turf of the Ballas, a rival gang from CJ’s past. While CJ might not be a member of the Orange Grove Families any more, the Ballas won’t see it that way, so it’s up to CJ to hurry back to Grove Street by means of a BMX bike (which is one of the new elements to the GTA series).

Upon arrival to his mother’s home, he is reunited with his brother, as well as his gangmates Ryder (MC Eiht), an Eazy-E look-alike who likes using the "N" word a lot, and Big Smoke (Clifton Powell), a large gangbanger who has moved to the neighboring district of Idlewood.

They’re not happy to have CJ back in the hood, as they felt that CJ left them behind, and is constantly referred to as a "busta" by Ryder. It is up to CJ to help bring the Grove Street Families back to their glory days, get respect in the hood, and eventually find out his mother’s killer.

The past Grand Theft Auto games took place in only one city, but not San Andreas. The game takes place in one state, and will feature three major cities, the aforementioned Los Santos (based on LA), San Fiero (San Francisco), and Las Venturas (Los Vegas). In addition, there are plenty of small hick towns and other secrets to uncover.

Along the way, CJ will meet a unique cast of cronies, starting off with his sister’s boyfriend, Cesar Vialpando (Clifton Collins, Jr, 187), who is at ends with Sweet over dating his sister. He will also meet the head of the Triads, a blind man named Woozie (James Yaegashi), an eccentric conspiracy theorist called The Truth (Peter Fonda), and the mysterious Mike Toreno (James Woods), whose motives will drive CJ crazy. Not only that, but fans of the past two GTA games will remember some old favorites such as the paranoid lawyer Ken Rosenberg (Bill Fichtner, Armageddon), mullet-headed Brit Kent Paul (Denny Dyer), and Don Salvatore Leone (Frank Vincent, Goodfellas).

Anyone who has played the GTA series of late knows the basic mission structure with all the extra features that leave you asking for more. San Andreas adds tons more. Starting off with the ability to ride BMX bikes, now CJ can fly more vehicles than available in previous titles. He now can swim, unlike both Fido and Tommy Vercetti, and even becomes adept at skydiving. CJ can also pick up girlfriends who will offer their cars and even their bodies if treated right (wined, dined, and 69ed). Street racing is back, with the added feature of tweaking up your ride in both performance and appearance (a poor man’s NFS Underground). Heck even when at a bar, CJ can play a realistic game of pool with money on the line. And speaking of money on the line, it is possible to gain or lose a lot of money on betting on dogtrack races or in the casinos at Las Venturas. There is more to do in San Andreas than their ever was in Vice or Liberty City.

Not only is the entire city unlimited in options, but so is CJ. Taking the clothes concept from Vice City, CJ can alter his appearance in terms of clothing, haircuts, and tattoos. CJ is also able to change his physical body image. Eating is now a must as health will slowly decrease due to hunger. However, eat too much and CJ will get fat, which will affect his running and athletic ability. On the other hand, spending time in the gym will allow him to not only gain muscle, but also earn extra stamina (for longer sprints) and new moves for hand to hand combat. Sex Appeal is also a factor based on workout time and the clothes that CJ wears.

In addition, he will earn experience from firing guns. As he gains experience, his level will increase to Gangster or Hitman status. Hitman status means high accuracy and quick loading times (AK47 Hitman status, for instance, are almost guaranteed headshots).

It is reported that to complete 100 percent of the game it will run 100-150 hours. The main story, however, can be beaten in 30 to 35 hours, but still that is more than most non-RPG games can offer.

One of the biggest complaints of the GTA series was the targeting system, which has received a major overhaul this time. Taking cues from Manhunt, target no longer locks on dead characters, and can also be controlled manually for fine tuned head shots. The target also has a health meter (based on color) where green goes to red and eventually black for dead. There are still elements where the camera gets a little wild on targeting, but nowhere near as bad as before.

Visually the game is impressive. It is standard GTA fare, but the blur effect from previous games has been changed, used only when driving a fast car (similar to what was used in Burnout). There are still elements of bad slowdown but nowhere near as bad (unless you are a veteran of the PC versions of Liberty and Vice, when it will be easily noticeable).

But of course, it’s the sound that makes San Andreas come to life. Once again we are treated to top quality voice actors: Samuel L. Jackson, James Woods, Chris Penn, Ice-T, Debi Mazar, Peter Fonda, and Frank Vincent, but the biggest surprise is the voice actor that played CJ. Performed by an up and coming rap musician named Young Maylay, CJ is not the brutal badass that Ray Liotta was as Tommy Vercetti, but is instead a highly believable character who knows how to take charge and still be original.

And once again, the soundtrack doesn’t fail to deliver. Centering on classic songs from the 90s, there are stations are available including:

BOUNCE FM (DJed by The Funktipus-played by George Clinton)-Funk music performed by Kool and the Gang, the Gap Band, Cameo, Rick James, and George Clinton

WCTR-If this is a West Coast station, shouldn’t it be KCTR? Anyway, this is the standard GTA talk radio station. And yes, both GTA favorites Lazlow and Fernando Martinez are back!

RADIO X (DJed by Sage, played by Jodie Shawbeck)-The Age of Alternative started in the early 90s, as proven by Depeche Mode, Faith No More, L7, Soundgarden, and Rage Against the Machine.

Needless to say, Rockstar has truly gone too far. What else can they add if there is a Grand Theft Auto 4 (or is it 6, as San Andreas is sometimes mistaken as GTA V)? With over 100 hours of stuff to uncover, San Andreas will be visited many times.