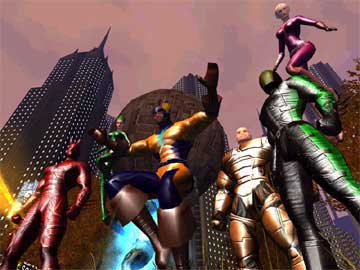 I have read and enjoyed superhero comics since I was a kid. Superman, Batman, X-men, I loved ’em all. Of course like every kid, I tried to imagine what it would be like to be a superhero, to soar above the city, as its inhabitants look to you for protection.

Well, now you can live out your comic book fantasies in City of Heroes.

City of Heroes is quite simply one of the best MMORPGs I’ve seen out there lately. This baby has been in development for almost four years (practically forever in game industry timescale), and although it was quite painful having to wait since last year’s E3 (when I first saw it demoed), it was well worth it.

The game is set in Paragon City, the bright center of the universe that seems to draw all of the world’s superheroes to it, in the spirit of Kurt Busiek’s Astro City comics. Since the Rikti invasion (some time in the recent past), certain zones of the city have been sealed off by force fields and reclaimed for the general populous. Unfortunately, various bad guy elements have seized upon the City’s moment of weakness to hatch their nefarious schemes. From street gangs to evil cults, to Nazi revivalists, the heroes have their hands full just keeping things under control.

That’s where you come in. Once you picked your server, you begin by selecting your hero’s origin (magic, tech, science, natural, or mutation) and archetype (scrapper, blaster, controller, defender, or tanker), and then select your powers. This is the true strength of this game. For a game that has no primary attribute numbers, this game still has as many or more ability options as any other MMORPG on the market, and significantly more than some. Each archetype has four, five or six primary power sets to choose from, each of which has one of two powers immediately available (and others become available at later levels). In addition, you select your secondary power set from four up to seven choices (depending upon archetype), of which you take the first power in each list. Combine that with the five origin types, and you have almost 1,050 different basic characters, and it only diverges from there.

Next comes the body type and costume. While there are only three body types (female, male, and huge (male)), you can set the height and musculature to a wide variety. And the costume options are virtually limitless. You can change everything about the character’s look – have him wear anything from tights to a suit and tie, to battle armor. You can change costume color (bit by bit or all over), facial expression, hair, and add cowls, scarves, hats, or helmets. There are like a million kinds of boots, what with shape, pattern, style, and color. Like I said, it’s virtually limitless possibilities.

Next, you have to think of a name, which you probably should have done when you were starting to create the character. It is heartbreaking to think up a concept, go though the process of making the character, and finding out only at this last stage that the name is already taken. But what some of my friends and I do if we can’t think of another name, rather than scrapping the character and starting over, is to put a special character, like a period, after, before or inside the name. Unfortunately, this allows people who can’t think of an original idea to have their knockoffs of heroes from the comics, so there are like a dozen Green Lantern’s and Wolverine’s out there, each with a special character thrown in. All I can say to these guys is: it is not that hard to come up with an original idea that can be fun to play, so, don’t make everyone think you are a loser by playing a knockoff.

It’s at this point in the character creation process where you can write a background story. I would guess that about 80 to 90 percent of players don’t bother. I personally think a good background story adds to the experience, and promotes role-playing. This _is_ a role-playing game, people – that’s what the ‘RP’ in ‘MMORPG’ stands for, honest. If you are one of the few, the proud, who have taken the time to write a good background story, I salute you. You enrich our online experience in exactly the same ways that loser knockoff players don’t.

Now that you’ve made a character, you are put into a tutorial level. This level teaches you about the game, one concept at a time. It seems unavoidable, even if you have done it before, but it isn’t too painful and gets you up to level two pretty quickly. Once you are done, you are put out into the regular game space to begin your good-guy career.

The first thing you probably want to do is level up. Each opponent you fight earns you experience points (how much is determined by what level they are relative to you). After a certain amount (which increases each level), a musical fanfare plays, a light show emits from your character, and ‘Level Up’ appears in big letters across the screen. At this point, you fight at the next level up, but to get all the benefits of the level, you have to go to one of the superhero trainers scattered about the City (one per zone). Different levels will give you different things, like selecting a new power.

Another thing you can get with a level is more enhancement slots for your powers. Each power has an enhancement slot where you can put particular types of, you guessed it, enhancements. With enhancements, you can improve certain aspects of your power: combat powers can have increased damage or accuracy, healing powers can have increased healing, almost any power can have increased recovery rate (the time it takes for you to be able to use a power again), etc. You can even put the same kind of enhancement in two slots to make it twice as effective. So, even if two players have picked the exact same powers, they may have enhanced them completely differently, thus furthering the already great variety of this game.

While you can probably play the game just going around and stopping drug deals, robberies, or rituals in progress, you can also go see contacts to get missions. Certain contacts are interested in certain villain groups, so they are likely to give you missions related to those groups. This allows for story arcs to come into play (remember what the ‘RP’ means?), and can allow you to appreciate the impressive depth of this game. Also, missions are with a fair chunk of experience points. In addition, your contacts will reward you by allowing to buy enhancements, giving you their ‘cell phone number’ (so you don’t have to run all the way back to them when you’ve finished a mission), or even introduce you to other contacts.

Some missions are too tough for you to take on alone. That’s when you need to find teammates. Just look around for characters that are about your level, and complement your archetype (like, all blasters would be bad, but a couple scrappers, a tanker, a defender, and a couple controllers would probably work). Then just invite them to join your team. While you are a member of a team, all experience earned is shared equally. You can even see where your teammates are on the map, if they are in the same zone as you. And you even have a special chat channel that only members of your team can see. If at later levels you want to make the arrangement a bit more permanent, you can even register a super group.

This game does have some server lag and server downtime problems. But I guess that is a mark of how popular it is, since all of the 11 servers seem to be at medium load almost all the time. But still it is annoying to occasionally have a lot of lag, or have the server go down without warning. This doesn’t happen very often, but even once is too often in my opinion. I can only hope it will stop happening as NC Soft gets a handle on things.

Despite it’s problems, City of Heroes is without a doubt the best online game to come out so far this year. It quite handily earns the four and a half Gems I am awarding it. Look for it in next year’s Game of the Year Awards.