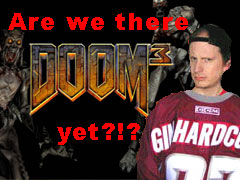 I know in my last commentary I trashed the merger between G4 and TechTV, and I stand by my decision to display nothing but hatred for this idea, but there was something on their website that I could not resist.

Any DOOM3 video would be worth seeing, considering that all I have seen for the last year and a half was the same trailer that was shown at E3 2003 (not including footage from the Xbox port coming out later in the year). Since then, people have been asking when the release date would be, and id's response was the very common "when it's done." However, just this last week, Todd Hollenshead, made an announcement saying "it's done" and that DOOM 3 has gone gold, with a release date of August 3rd.

Sorry id, but I still don't buy it. Until I have the game installed on my computer, I don't believe you.

DOOM3 has been planned since 2001. I still remember Steve Jobs, being the arrogant jerk that he is, using DOOM3 footage as he bragged that the GeForce3 will be released first on the Mac, which didn't happen. Even Half Life 2, which is still being developed (using a code leak as an excuse for the delay) hasn't taken as long as DOOM3. After being screwed over with long delays only to finish with a wretched title (Daikatana, anyone?)or never come out as all (Duke Nukem Forever), one can show nothing but skepticism.

PC delays infuriate me because unlike with consoles, PC titles have unique system requirements. Since PCs vary from user to user, what may work on one computer might not on another. When you add delays to the mix, a game that would originally require a 700 MHz Pentium 3 with 128 MB of RAM will end up requiring a 1GHz Pentium 4 with 256 MB of RAM. To make matters worse, not everyone can afford to upgrade their system on a regular basis.

And that is one thing that truly scares me about DOOM3: not the graphics or storyline (although they look very promising), but the insane system requirements.

Maybe I should say, LACK of system requirements. As of this writing, id Software has not released the exact system requirements, but the latest issue of PC Gamer which reviewed DOOM3 has the minimum system requirements of a 1.5 GHz Pentium 4 or equivalent processor, 384 MB of system RAM, and a 64MB video card (GeForce 4 MX minimum). There was, however, no listing of how much hard drive space will be required. How many games out on the market require 384 MB of system RAM to begin with? Not even Unreal Tournament 2004, another system hog (requiring 5 GB of hard drive space), required this much muscle to run. While I may have the horsepower to run DOOM3 (Athlon XP 2600+, 512 MB of RAM, and a Radeon 9800), I still shudder to think just how slow it will act.

On a nostalgic note, I went through the same problem when DOOM was released 10 years ago. I had to upgrade my processor from a 386SX/25 to a 486DX2/50, and then quadruple the system RAM from 2 MB to 8 MB. Both upgrades cost me a fortune to install, and while upgrades these days are much cheaper, it still can be quite a hassle.

But still, even with the technical hurdles that I will have to overcome to play DOOM3, I'm also scared that the game will fail to meet expectations. Remember that DOOM3 is actually a retelling of the original game, almost as if DOOM and DOOM II never existed.

First person shooters have evolved greatly since DOOM3's announcement. Look at Far Cry or Unreal Tournament 2004 to see how the genre expanded; new graphics and state of the art technology cannot completely mask the fact that the game is from the year 2001. Even first person console experiences such as the Chronicles of Riddick (which almost uses the exact same "normal mapping" graphics technology) add more than the first person run and gun experience that DOOM3 will present.

Don't get me wrong, I am seriously looking forward to August 3rd. Pending that the game does not get pushed back or lost in shipment, I will have the lights turned off, the doors locked, and no contact with the outside world as I put DOOM3 to the test. I just hope that I can both get the game to run well on my system, and that the final product does not suck, causing the biggest flop since Daikatana or Medal of Honor: Rising Sun.

UPDATE: After this writing, the Houston Chronicle revealed that DOOM3 will also require 2 GB of hard disk space, which puts it at the same install level as more recent games such as Far Cry and Tron 2.0 (and thankfully nowhere near the massive 5-6 GB range of Final Fantasy XI and Unreal Tournament 2004).