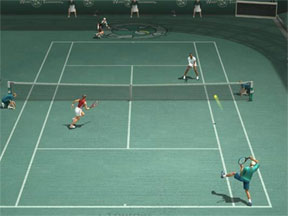 Tennis as a sport is very fun. Unlike pick-up basketball or touch football where you have to get a bunch of people together in order to feel the full experience, tennis allows you just to call your next-door neighbor up and run out to the courts. The sport has also enjoyed a lot of popularity abroad, obviously in and around Europe where the game originated from, but also in places like Japan where the sport has become so popular that people have to pay for and reserve a court months in advance.

The sport has also translated well into a video game format, and even in today’s market where complexity reigns games like Virtua Tennis are praised highly (thus the ranking of Virtua Tennis as one of the top ten games ever a few years back). Now Namco has made their entrance into the genre with the Smash Court Tennis series. The series’s latest installment, Smash Court Tennis 2: Pro Tournament, proves that while Namco does have a general idea as to what they’re doing, they still have a ways to go before they catch a piece of Virtua Tennis’s greatness.

Unlike Sega Sport’s arcade-like take on the series, Smash Court attempts to be a mix of simulation and arcade concepts. All of the face buttons are used, as each one performs a different type of shot. The shots have different speeds and spins, and the more devastating shots are harder to time. The whole system takes a little bit of getting used to and it never quite works perfectly, even with deep time investment. Still, though the inexperience feels a tad incomplete, it is deeper than Virtua Tennis.

As far as features go Smash Court is a mixed bag. The game does offer 16 different male and female pros to pick from (not bad) and many licensed tournaments including the Australian Open, the French Open, the U.S Open, and Wimbledon. As far as create-a-players go though Smash Court’s is shallow. The actual selection of modes isn’t astounding either. Arcade and Exhibition mode are practically interchangeable, and Challenge mode is something you can experience through the duration of the Pro Tour mode. The only other mode offered is the Spectator mode, and as you would expect watching virtual tennis is not the most exciting thing ever invented.

The Pro Tour mode can be frustrating as well, especially when you’re just starting out. The game presents you a calendar that you are in, advancing from one day to the next. Each day holds its own challenges that you can choose from, including tournaments and training. The problem is if you fail any of these things you can’t redo them, the game just goes on. So, when you’re still learning, you’ll continue to fail event after event that you can’t redo.

Graphics in the game are above average. The player models in particular are very detailed and look exactly like the tennis pros they are imitating. The animations that these players have are smooth as silk, and a pleasure to watch as you play.

On the audio front the game also does quite well. The sound effects offered sound like all the things you would hear if you watched a live broadcast of Wimbledon on ESPN. The music too, while sparse, does its job.

In the end you can tell that Namco is onto something with their tennis series but so far they haven’t been able to make all the pieces come together. If Namco could bring it all together and make the deeper Tennis experience they are attempting to provide than I believe that Sega Sports would have real reason to be worried. Until then though, Smash Court 2 is just a game to be played by tennis aficionados.