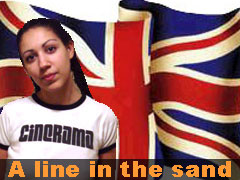 Another tragedy befalls two families, ending in death and ultimately the vilification of videogames. Some things never change, but maybe it's time they did. The videogame industry is letting young people kill each other with such frightening regularity that someone or something needs to come down on it soon and hard. Or so certain sections of society would have us believe; namely, parents of children who have just slaughtered one or a number of their peers in cold blood.

The latest case was reported in the Telegraph newspaper and tells the tale of the parents of a schoolboy murdered by a teenage friend. This week, the dead boy's parents have blamed the crime on the killer's obsession with Manhunt – Rockstar North's notoriously violent game.

Stefan Pakeerah, 14, was brutally battered and stabbed to death. He was lured to the park by his friend and killer Warren LeBlanc, 17, who had the intention of robbing Stefan. Warren beat his victim to death with a claw hammer and stabbed him repeatedly with a knife. He faces a life sentence.

Warren pleaded guilty to the murder and was remanded in custody pending reports. Stefan's father, Patrick, said the boys used to play Manhunt on PlayStation 2. He claims the murder was planned to mimic the game, "using weapons like hammers and knives."

Mr Pakeerah said, "If these games influence kids to go out and kill, then we do not want them in the shops."

Stefan's mother, Giselle also blames the game, "I think I heard some of Warren’s friends say that he was obsessed with this game. The aim of the game is to kill and to do it brutally. It should not be available to young people."

As I am writing this piece, news alerts have appeared stating that high street store Dixons has removed all copies of Manhunt from its shelves following its association with the murder. People from all corners are calling for the game to be banned. So it seems that this has turned from Manhunt to witch hunt.

Nobody can deny that this is a terrible story and that all our sympathies lie with the family, but a line has to be drawn. We cannot enter a world where any form of creative expression can be banned or withdrawn on the demands of a bereaved family. There is no evidence at all that games have any influence on an individual's actions. If they did, wouldn't there have been a spate of teenager on teenager, Manhunt-inspired killings by now? Of all the hundreds of thousands of people who play games everyday how many are inspired to kill? The answer is not many and those that do kill probably have deeper issues.

As is only to be expected, the national newspapers have jumped at the opportunity to berate videogames once again. People are citing New Zealand as an example to follow after they infamously stopped the game being published in their country at all. I wonder what they blame their teenage violence on now in New Zealand?

Of course the real tragedy is Warren and Stefan shouldn't have been playing Manhunt in the first place. This is an "18 and over" rated game and one has to wonder how they even laid their hands on it. Maybe it was a birthday present, or the result of pester power. Either way, some responsibility does lie with parents to monitor their children and check in to see what they are watching, playing, reading and generally doing. Waiting until such a tragic event is kind of like closing the stable door after the horse has bolted. Too many parents disregard the ratings on games.

The word ‘game' is at the root of the problem. It's only a ‘game' these parents think, until something goes horribly wrong and then it's a different story. There is nothing a shop clerk can do when they refuse to sell an 18 game to a 14 year old child, only to see the child return with their parents later that afternoon to buy the very same game. My advice to parents is the ratings are there for a reason – read them! The days of children playing in the streets with hoops and sticks are over and no amount of banned games will restore those supposed halcyon days of yore.

ELSPA's official statement to trade magazine MCV says all that needs to be said: ""The game in question is classified 18 by the British Board of Film Classification and therefore should not be in the possession of a juvenile. We would also add that simply being in someone's possession does not and should not lead to the conclusion that a game is responsible for these tragic events.

"Games are played by all ages of people, from eight to 80, and all are subject to strict regulation. There is no evidence to suggest a link with events carried out in everyday life, as many eminent experts have continually concluded.

"We would emphasise the need for all parents to be aware of the guidelines and ratings which apply to all games. Whilst we cannot comment on behalf of the publisher of the game in question, the procedures that it adopted were entirely responsible and in line with legal and industry codes of practice."