Gorogoa is a remarkable achievement, when you consider that every stunning panel was hand illustrated by solo developer, Jason Roberts.  Some may criticise Gorogoa for its brevity, but after what I’m sure was a painstaking six years of development, it delivers a magical experience that should be played.

The game opens with a boy looking out of a window. Everything is a beautifully hand drawn and reminiscent of an old European city, with grey stonework and vert de gris rooftops or terracotta tiles. A multi-coloured creature glides past the buildings. The boy turns the pages of a book trying to identify the creature and then the whole scene is transported to the top right hand corner of a grid of four tiles. The rest of the tiles are empty. This is the playing space.

Each of the gorgeous scenes can be manipulated using this grid. Layers of some pictures can be lifted off and moved over to  a tile space or laid over another picture. Using the mouse or cursor, it’s possible to move deeper into a scene, in ever more complex layered puzzles and pictures.

It’s probably becoming clear that this is a difficult game to describe. Possibly the closest comparison is Myst, but that still doesn’t do Gorogoa justice. The puzzles here combine some of the mechanics of Myst with elements of hidden object games to create a gorgeous Celtic knot of images. 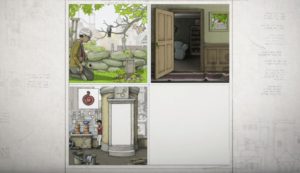 For instance, zooming in on the branch in a painting, on the wall in one scene allows that tile to be lined up with a tree in another scene. This completes the picture and sets off a chain of events, which allows the game to progress.

In another moment, a door frame in an interior can be moved and placed over another tile, featuring a far off tower, allowing the boy to walk through, transporting him to another space. Alternatively, zoom in on paintings and carvings in one tile to reveal hints for solving the puzzle or to line up patterns with another tile. The game effortlessly allows the player to move through spaces and then zoom out to find themselves in a completely different place.

Gorogoa could have easily become a tangle of images and puzzles that don’t make sense, leaving the player aimlessly laying images over each other until hitting on the solution. But this never happens in Gorogoa. 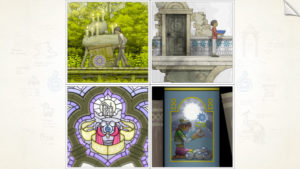 At times I was challenged. I frowned, but was never frustrated. Everything I needed was there to solve the increasingly intricate set pieces and time and time again I would solve it with a satisfying ‘aha’ moment. Of course it helps that Gorogoa is one of the most beautiful games of the year. If I have to study every detail of a game, then let it be one that looks like this.

Gorogoa is one of those games where I want to know how they did it, but also don’t want to lift the curtain because that would spoil the magic. Yes, this is a short, two-hour experience, but it’s rich and atmospheric, with satisfying puzzles and an intriguing story that relies on a less is more approach. It’s brevity is one of its strengths because it left me wanting to return to Jason Roberts’ beautifully, melancholy world again and again.