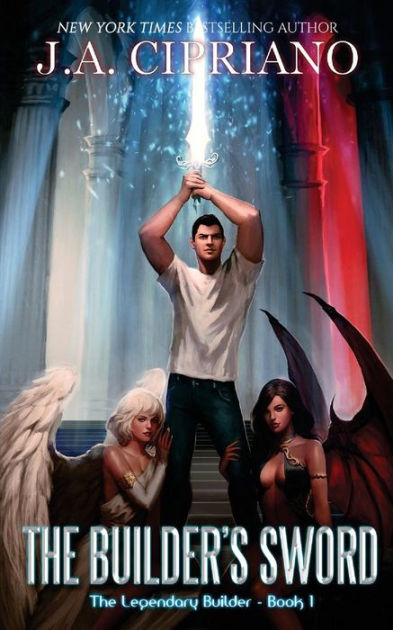 This week for Bookish Wednesday I’m giving an author a second chance. It’s The Builder’s Sword, Book 01 in The Legendary Builder series, by J.A. Cipriano!

Plot Synopsis: Arthur Curie never expected to wind up in Hell. At least, not because he found an ancient sword in a pawnshop. To make matters worse, Hell isn’t as he thought. It’s a desolate wasteland under siege by an all-consuming void known as the Darkness. Now, he’s trapped with no way home, a ragtag army of women, and a sword whose only power is to modify the abilities of those around him. Not exactly winning odds…

Plot: The plot would have been decent if it hadn’t broken it’s own rules it sets just minutes before. It’s a standard LitRPG sort of book, although calling it a LitRPG may or may not be fully accurate I don’t particularly care enough about this book to waste time pondering that question. I had hoped the author, who I called out for making really blatant references in another of his series World of Ruul, had improved over the terrible writing he showed in that book. He didn’t, he has a character explain to Arthur that this isn’t a game, it’s real life. So what does Arthur do? He immediately starts calling out orders like he’s playing an MMO in a raid encounter. He uses words and slang that wouldn’t make any sense to the other characters based on what the author first says. Even worse he has a character that is almost a straight up copy of the main character of Legendary Moonlight Sculptor. There’s only one difference and that is because the character is a woman. I’m okay with clever and subtle references to other works, or influences, in your writing. The World Seed series makes an excellent example of what I mean when it is referencing LMS. However I am not okay with a character blatantly performing and copying the same actions as other series’ characters. The one thing he has improved on in this book is the blatant character references that were so prevalent in his World of Ruul series. That’s about the only improvement I’ve seen in his writing.

Characters: None of the characters are particularly deep, and Arthur is about as smart as a brick. The fact he gets things done is more because he’s a gamer, not that he’s anywhere close to intelligent.

Overall: Skip this book, avoid it like the plague. In fact you’re probably better off avoiding this author entirely. Unless I see a clear improvement in later works by the author I’m going to steer far away from Mr. Cipriano and his terrible work.

For those who like: Mediocrity, Poor Writing, Terrible Plot, Even Worse Cast of Characters.

Not for those who don’t like: Any of the above, which should be just about everyone, except maybe Twilight fans.