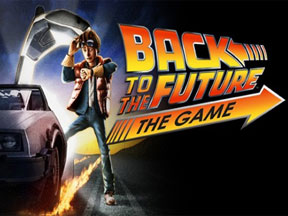 Back to the Future Episode
1: It's About Time

Given that I stayed up very late last night to finish the first episode of the Back to the Future game in one sitting, I’m sad to say that I kind of ignored this game for quite a while. I was told about the game before it was available, but it was pushed to the back burner and I forgot about the release in December.

Now on the eve of the release of the second of five episodes in February, I thought I had best get to playing it.

I went to http://www.telltalegames.com/bttf while I was downloading the game and watched the intro video. I thought, WOW, Michael J Fox voiced this game! I was later surprised to see that Marty McFly was actually voiced by A.J. LoCascio, but he did such great job you would think it was Michael who put his voice likeness to the game. Old Doc is voiced by Christopher Lloyd and there is also Young Emmett Brown, George McFly, and of course Biff as characters. The voice acting is terrific.

On the website there is also a mystery character that is coming soon. I guess we will have to wait and see who that is. I highly recommend checking out the website.

I’m a huge fan of the movies and actually went to see "Back to the Future" on the big screen with my buddy Steve for the 25th anniversary this past fall. The show was sold out, and I have to say it was still an incredible thrill even though I have seen the movie many times.

The first episode starts a few months after the 3rd movie. Marty has a dream about the night at the mall with Doc and Einstein, where Einstein (the dog) does not return from his one minute trip into the future.

You get to inject some of the dialogue and eventually you wake up from your nightmare. You are then reminded that Docs house and contents are being auctioned off today. It turns out that your Dad is running to show so he can make sure it is done right and there are all the wonderful things from the movies like the dog feeder, the clocks, the giant speaker system, the model of the town square, etc… I don’t want to give away the whole plot but eventually the DeLorean appears and you have to go back in time to save Doc. But first of course you have to figure out when he is first.

This is an amusing (you might have gotten that by me staying up and finishing it one sitting) point and click adventure game set in a cartoony rendition of Hill Valley. It’s pretty cool that a game about going back to the future uses and revives that old school gaming technique of point and click adventuring. How many games like this have we enjoyed in the past? Yet they are almost non-existent today.

Interacting with the items at the estate sale is your first introduction to the game’s controls. You have an inventory where you store things you can use and if you get stuck there is a great hint system with basic and then blunter hints that you can reveal.

When you interact with other characters in the game you have several dialogue choices that you can select from. Occasionally these can get repetitive as you try to figure out what to do next, or get through a puzzle when you keep getting the same responses over and over and over again…but enough about me getting stuck on a certain puzzle.

The game is tremendous fun, and the attention to details by the developers is just astounding, I love the little touches you find though the game. If you had not guessed, I’m being deliberately vague here. The game won’t be overly challenging for most gamers, but is priced to tempt gamer and non-gamer fans of the series alike. I can’t wait for Episode 2.

Episode 1 can be purchased for $24 direct from the publisher Telltale Game’s Website at www.telltalegames.com