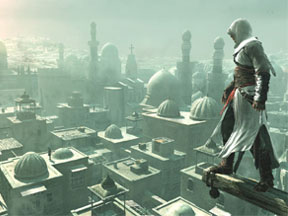 Who doesn’t want to be a badass twelfth century assassin? In Assassin’s Creed you play as Altair, a member of the Hashshashin (a real group of assassins for you history buffs). And he is the best that ever was, but he does not follow their creed very well at all, which is revealed in the very first mission you undertake as Altair.

The game opens with Altair walking through a strange fog where you here voices in English telling you how to use your skills and providing an opportunity to try them out. All this takes place in the fog, leading you to believe that you might have gotten the wrong game in your box.

What you eventually learn is that your character in the game is actually in the twenty-first century, and lies on an Animus bed at a company called Abstergo Industries. The special bed allows you to relive genetic memories of your ancestor Altair. But I’ll stop there because I don’t want to reveal any more than that.

Back to the Altair portion of the story. Your first mission does not go very well, and you are stripped of your rank and weapons, which you must re-earn by completing nine assassinations in the districts of three cities Damascus, Jerusalem, and Acre.

Stalking your target is done by learning more about the city and your target. You learn more about the city by climbing up to some of the highest spots and taking a look around. This is where you get to enjoy the detail that developer Ubisoft Montreal put into recreating the three cities with a sweeping birds eye view of the surrounding area. It’s breathtaking to say the least.

The more towers or minarets (the towers that normally sit beside mosques) you climb, the more you will learn about the city, and the more cool stuff you will see. I never found this part to be repetitive, just breathtaking each and every time.

Learning about your target on the other hand is a different matter. This is done by eavesdropping, pick pocketing, intimidation (beating the stuffing out of someone until they tell you what you need to know), and with the use of informers who usually want something in return for their information. On average each mission requires a couple of these sub-missions before you are authorized to take out your target. Over the course of nine targets, this can be a bit much.

The cities are well guarded by stationary and patrolling guards. You can tell the general alertness of the city by a white, yellow, or red alert on your heads up display and by the individual guards who either stand with their arms crossed (low), with hand on sword hilt (medium), or finally with sword drawn (high) ready to kill you.

Altair can of course hold his own against a number of guards, but the objective here is not to kill them all as they are not your target. You can kill a few on some of the side missions to help out people in the city, but that is up to you.

When the guards go on alert you need to hide in one of the many convenient straw piles at ground level, or in one of the many curtained huts at roof top level. The trick to getting away is to break the line of sight of the guards and then hide. As long as you have not completed your assassination, they will eventually reset to a calmer level.

After your assassination, they reset, but still remain vigilant looking for you. You can break the line of sight by running around corners or by taking to the tops of buildings. Personally I like climbing up a ladder and running along the roof tops leaping from building to building when ever possible.

Your control of Altair allows you to move around really well. He is more of a marionette where depending on what you are doing, you have enhanced control of his arms or legs. If you are running you have more control over the movement of his legs for example. Without even meaning to, I made some fantastic leaping rolls as I escaped from the guards.

When you want to climb something your control shifts from Altair’s legs to his arms. This allows you to plan your climb up tall buildings. To some extent I saw this as climbing one of those fake rock walls with the hand holds in odd positions requiring you to plan your route carefully. When you climb up the highest towers and look around you can get back down by climbing, or by making a leap of faith into a pile of hay below. This involves walking out onto something (kind of like walking the plank) and leaping.

Combat is kind of a combination of the above movements and is best described as almost a dance, combined with movement and good button skills. You have to swing, grab, toss, and counterstrike at the right moments. If you do this well, the fighting is like dancing a perfect ballet. As you progress in levels you get new combat options, which you can try out in the fighting pit at headquarters.

Once you have gathered enough information about your target and been given permission to make the hit, you have two clear options. Go in and start swinging or go for stealth, though sometimes stealth fails and you are left just swinging.

Once you make the kill, the whole city will be on alert and you need to get away from the guards and then sneak back to the safe house, which you can not enter when the guards are in hot pursuit. After my first assassination, I had a hard time running against the zone boundary. As I neared the safe house I was spotted and every way I tried to go I kept hitting the boundary and I would have to turn around and try another way.

Besides the repetitiveness of certain areas of the game, the other poor area is the voice acting. First of all, the whole game is in modern American English, which they do address by saying that you are translating what you hear in to words that you understand. But that does not forgive the horrid voice acting for Altair and the constant reparative voices that you hear around the city.

Overall I found that I really enjoyed Assassin’s Creed. The areas that were well done are very well done, such as the city views and climbing towers, as well as looking around. Plus the whole movement control and combat system are truly stellar. The areas that we not as well done, unfortunately are pretty bad, and here I include the worst offender: the repetitiveness of the missions.

Compared to say, the Hitman series, Assassin’s Creed is not quite so in depth in terms of stalking your prey and using your environment to kill people in ingenious ways, or say, using different disguises to infiltrate areas, which you don’t do at all here. However, the medieval setting in biblical cities is really awesome, and anyone with a sharp mind (and a sharp blade) should have a lot of fun here, just not in one sitting.