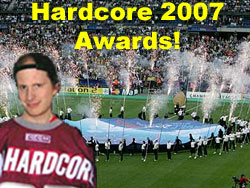 Well here we are in 2008, and as we start a new year I have to admit that 2007 was a great year for gamers such as ourselves. The Wii continues its dominance despite the scarcity of consoles, the 360 follows through with the "perfect storm" of titles that Peter Moore mentioned at E3, and even the PlayStation 3 is now starting to come up with some titles worth looking into.

And while we at GiN are busy counting all of our nominations for our Game of the Year awards, you all know that I'm an impatient person and I have to come up with my own awards. Some of the awards that I give will never be acknowledged by the rest of our staff, but I don't care. If anyone wants to give me hate for my choices then fire away.

To start off, I have made a new category that I want to start awarding a dubious honor to, and that is for the biggest waste of Microsoft Points. Some people may come to know it as the "Horse Armor" downloads.

Thankfully I was one of the smart ones not to waste money on horse armor but that doesn't stop me from downloading other stinkers out there. This year I am giving the inaugural award to Sensible World of Soccer. I know there are a lot of SWOS fanboys that are already fuming at the mouth, but this game frustrated the daylights out of me. It seemed that my team is either afraid of the ball or when they have the guts to go after it, they lose possession when I change direction. Even worse is the way the AI always seems to find the way to get control no matter what I do against them. I can see after playing SWOS just why Jim Rome hates soccer the way he does!

Another award I am introducing this year is the "Dumbass of the Year" award. For someone to obtain this they would have to do something completely stupid, so completely asinine that it makes you wonder why they are still in the business. If this award was given out in year's past, some of the more notable recipients would include John Romero for threatening to "make us his bitch," Sony's staff for their embarrassing E3 2006 press conference, and John Riccitello of EA claiming that a dollar spent on Dreamcast marketing is one less dollar spent on the PS2.

(Don't you find it ironic now that EA's games run better on 360 compared to PS3? Conflict of interest?)

But this year there were some viable choices. I could have given it to Dr. Phil for claiming that games caused Seung-Hui Cho to commit his massacre at Virginia Tech despite evidence to the contrary. Then again I was so close to giving it to Reggie Fils-Aime of Nintendo for not planning ahead and providing enough Wiis to meet holiday demand for the second year in a row. The only reason he didn't win this dubious honor is because of a comment he made ripping into retailers who are still hell bent on forcing bundles on unsuspecting customers.

No, in the end I had to give "Dumbass of the Year" status to Jack Tretton of Sony for all of his insane comments. But none hit as hard as the classic line he said in an EGM interview, "If you can find a PS3 that is sitting on store shelves for more than five minutes, I'll give you 1,200 bucks for it." Can you imagine how much in the red he would be if he upheld that bargain? Penny Arcade is owed over $16,000 for their research, and from what I've uncovered, I'm owed $12,000!

And of course, with the annual awards there is the tradition I have of "Badass of the Year." Again I had a lot of choices to come up with this year. I could have selected Altair from Assassin's Creed. Sure he wasn't truly the main character and was passed off as a virtual character in a device called the Animus, but you have to admit, how could someone move so gracefully, kill his prey without warning, and then take a nosedive into a hay cart without thinking twice? Or there are the Big Daddies from Bioshock? Just the sound of them alone can result in sheer terror. Then there is the SAS tag team of Captain Price and "Gaz" from Call of Duty 4 who just ooze badness in every action they take. But my choice for Badass of the Year is something that brings fear to even the hardest Guitar Hero veteran: DragonForce.

Sure when Neversoft made Guitar Hero 3 they decided to up the difficulty, but by adding DragonForce and their seven minutes of sheer torture in "Through the Fire and Flames," they easily brought me down to my knees. And this is the same group that created a song that resulted in me getting owned by the PMS Clan at VGX. For that they shown how badass they are and worthy of such an honor.

I also have made my choice for what I like to call the "Holy @&!% Moment of the Year." This usually involves an event in a game that is so memorable that it will be spoken of for many years to come. One of the more popular ones to many gamers (but not myself) would be in Final Fantasy VII when Sephiroth kills Aeris. Last year the honor went to Gears of War, and in particular, when you see the Berserker for the first time.

This year it's not going to a certain moment, but actually to a whole game because it was filled with those moments. When you have a game that features a chase through a sinking cargo ship, watching your own execution, seeing the lead bad guy's son off himself in front of your eyes, a killer ending, and a nuclear explosion that gives new meaning to "Shock and Awe," it's more than enough proof to give ALL of Call of Duty 4 honors for "Holy &@^! Moment of the Year!"

Ok with all my personal awards out of the way, I want to make my predictions of what will win our annual awards:

PlayStation3: N/A (Don't have one)

It will be a few weeks before we get the official votes counted for our awards, but hopefully they will be about the same as what I chose here. We'll just have to see.