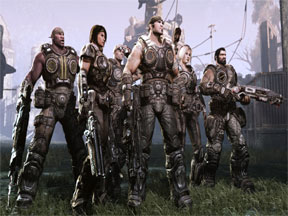 The Gears of War series emerged for gamers back in 2006, and has become an exclusive masterpiece for the Xbox 360. The amazing visuals provided by Epic’s Unreal Engine 3, combined with an astonishing story, engrossing third person cover shooting, and some great voice acting made it a lot of people’s favorite series.

I do admit, however, I was a little disappointed with the second game. It suffered from what I call the traditions of a sequel leading to a trilogy, adding a subplot that drags the game down a bit (namely the search for Dom’s lost wife Maria,) a somewhat disappointing final boss compared to General RAAM, and worst of all, no Berserker to unleash true terror like in the first game.

But the ending did provide some key moments to ponder. What will happen to the COG now that Jacinto stronghold was flooded? And what is the truth behind Queen Myrrah and how does Marcus’ father Adam Fenix pertain to it?

Gears 3 jumps ahead 18 months since the Jacinto flooding, the COG has been disbanded, and all who were left retreated to the island of Vectes to rebuild. Dom still mourns over the loss of Maria, is a changed person, and even Chairman Prescott abandoned his troops. However, those who do survive, including Marcus, are attacked by the Lambent (those who were infected with Imulsion.) During an attack Marcus receives a message stating that his father is still alive. The remaining soldiers leave Vectes to not only regroup, but find where Adam is and hopefully put an end to not just the Locust, but the Lambent as well.

Once again the game consists of five acts of varying number of chapters. However unlike the other games, some chapters are not played by Marcus. One set of chapters is played by Cole, which culminate in perhaps the best holy crap moment in the series since the appearance of the Berserker. In it, Cole reminisces of his days as a star thrashball player, but ends up thrusting a bomb into an enemy at the last second. I always liked Cole as a character but this takes him to a whole new level.

And speaking of the Berserker, I am glad to say that not only is she back, but worse than ever…as a Lambent version! Once again, the tension and horror I had while facing her is made worse when you consider you not only have to avoid her charges, but the massive amounts of Imulsion that she bleeds out too. All of this is part of an amazing third act that might be the high point in the entire series!

Thank you Epic for listening to my complaints and adding the Lambent as enemies in addition to the standard Locust. It adds so much variety to the game. Rather than just crawling out of Emergence Holes, they now jump out from the ground and even burst out from emerging stalks. Some of the Lambent are now able to even mutate after taking extensive damage, growing tentacle like limbs that need to be shot as well when they are severed.

The action just never ceases to end. And it is made even better now that the campaign can be played by up to four players at once, either as the original story mode or in an arcade mode to see who scores the most. Even with finishing the main campaign (which took me about 10 hours) it is worth going back again with some friends.

The same can be said for the co-op multiplayer modes. I loved Horde from the original game, and Horde 2.0 is even better. Taking a cue from the Zombie games in Call of Duty, the new Horde allows cash to be earned for killing the Locust/Lambent in order to purchase weapons, ammo, defenses, and even the new Silverback power suits (which are a complete blast to use in the campaign as well.) The new Beast mode turns the tables around, allowing players to take control of the Locust to attack a command post. Money is used to purchase newer and stronger units, and they are just as fun to play as Horde.

The Gears of War series has always been known for pushing the Xbox 360 in terms of visuals, but with 3 I think they went above and beyond. The characters and enemies are much more detailed than ever before, while maintaining a very smooth frame rate overall. And for once, Gears 3 deviates from the stereotype the series has had with a severe lack of color. The new setting of Gears 3 is much more colorful than before, contrary to what certain other "chick" reviewers have said.

And again, I can’t get enough of the excellent voice acting of the game. The usual big names are back: John DiMaggio (Marcus,) Fred Tatasciore (Baird,) Carlos Ferro (Dom,) and of course Lester Speight (Cole Train.) But the additions to the series are worth mentioning, such as Claudia Black as new female Gear Sam, and Ice-T as fuel tycoon Griffin. In addition, for Gears of War 3, Ice-T reunited his metal band Body Count for the game’s end theme!

DLC will be available in the immediate future, starting with the "Horde Command Pack" which will provide new maps for both Versus and Horde modes. In addition, a Season Pass will be available for purchase that will consist of the first four pieces of DLC.

It’s sad to see such a great trilogy come to an end, but what an ending it has.Gears of War 3 starts off the fall/holiday season with a bang, and if it ends up the same way the Halo trilogy did, I can only think of what future Gears titles will come out. Dare we say: Gears of War: The Pendulum Wars? Or even better: Gears of War: Emergence Day?

Pros: A fitting way to end the Gears of War trilogy. Act 3 might go down as one of the best acts in game history. Visuals look better than ever before, and yes they are more colorful. Horde 2.0 is as much fun as Zombies in Call of Duty. Four player campaign mode, both in story and arcade. New female Gears join Delta Squad. THE BERSERKER IS BACK!

Cons: Sawed-Off Shotgun might be a bit TOO powerful (causing Epic to tone it down via a patch.) The fact that this amazing trilogy has to end.