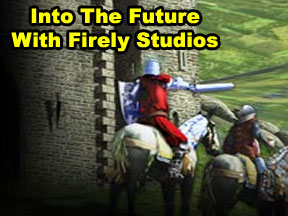 Firefly Studios has been in this business a long time. Founded in 1999, their very first title, Stronghold, was a huge hit. Now many years and publishers later, they have both a hit free-to-play online game and another potential hit shipping to the market right now, Stronghold 3. We spent some time with the lord of Firefly Studios, Simon Bradbury, and talked about everything under the strategy sun.

GiN: For those who don’t know, can you tell us when Firefly Studios was founded and by whom?

Bradbury: Absolutely, the Firefly story actually starts in the early 90s at Impressions, where as a freelancer I got to know Eric Ouellette, the Producer on Caesar and Lords of the Realm. For those that don’t know, Caesar was a city-builder not unlike SimCity, only with added military and historical dimensions, while the Lords of the Realm series was more to do with turn-based strategy and combat. In 1999 we decided to break out on our own, founding Firefly Studios and channeling our city sim and RTS experience into the creation of the Stronghold franchise.

GiN: Most people probably became aware of Firefly with the release of Stronghold. Was that your first game?

Bradbury: Yes Stronghold was Firefly’s first title, released two years after the company was founded. Personally my first game was ‘Elf’ a side scrolling arcade game released in 1985 on the Atari ST and Commodore Amiga.

GiN: Stronghold won many game of the year awards, including one from Gameindustry.com. How did you come up with the idea of combining a sim-like castle building experience with the real-time strategy genre that was just becoming very popular at the time?

Bradbury: The idea to combine the two genres was shaped largely by my and Eric’s time at Impressions. Working on Caesar and Lords of the Realm meant that we were well versed in the design of both city sims and strategy games. Stronghold was brought about by our desire to bring players a game that merged these two genres seamlessly, without sacrificing the fun found in either. I also loved castles having been dragged around them many times by my father whilst on holiday as a small boy!

GiN: Did you expect that Stronghold would be as popular as it was? Did this popularity cause any problems? Did your publisher at the time, not to mention your fans, demand a sequel be rushed to market or anything like that?

Bradbury: We knew we had a great game on our hands with the first Stronghold, but were quite surprised by the game’s commercial success (and that of its sequels!). The warm critical reception given to both Stronghold and Stronghold: Crusader was of course massively appreciated and made the hard work put into those titles worthwhile. After our early success there was a clear desire from our publisher and the fans to see Stronghold 2 and, although we perhaps overcooked that title a little, we’re to make Stronghold 3 much closer to the original.

GiN: In terms of Stronghold sequels, some have been wildly successful, while others have been less popular. Have you learned what gamers like in Stronghold games and what you think they don’t like so much? I guess we’re asking if you have refined that Stronghold magic?

Bradbury: We learnt a number of valuable lessons developing Stronghold 2, one being that, while the simulation aspect is integral to Stronghold, it can be taken too far. What we’re aiming for with Stronghold 3 is to respect the franchise’s sim roots in ways that are fun for the player. That means less protracted judicial systems and more physics-based traps, procedural wall destruction, freeform castle design, dynamic villages and realistic sieges with true night-time fog-of-war. We also learnt a big lesson with Legends which whilst being a very fun game was less well cherished by the fans as it dipped into fantasy. I think the vast majority of Stronghold fans would prefer it if we stuck to historical accuracy, so that is what we aim to do in the future.

GiN: You created other games in addition to Stronghold. Some people might remember Space Colony, which was sort of like a comical simulation. As I recall, though the game was reviewed well, it didn’t achieve the success that Stronghold did. What do you think was wrong with Space Colony, or the market at the time, and did you learn anything from its development?

Bradbury: We’re actually really proud of Space Colony, it remains a great strategy game and is both fun and fresh. I think the mistake was that the publisher didn’t know how to market it! It was pitched as kind of a ‘Sims in space’ when really I think more people would have ‘got it’ if they were told it was a space base builder (think anno 2070!). We hope to update it in the near future to handle Win7 and give it modern resolutions and perhaps give it another shot!

GiN: After Space Colony, did you decide to just work on Stronghold-themed games, or were there others?

Bradbury: A big new title was obviously CivCity: Rome – which was kind of a return to Caesar for us, although obviously with a Civilization slant to it. We had several meetings with Sid to give him some input at the start, which was fun. We also worked long and hard on Dungeon Hero – which was really coming together when the floor caved in beneath it in the 2008 credit crunch. Gamecock collapsed and with it our monster friendly arcade basher. It still lives however, brooding somewhere under the floorboards!

GiN: You’ve worked with a few different publishers from GOD Games to Take Two. How was your experience with the various publishers? Do you feel you got everything you deserved from the developer/publisher relationship?

Bradbury: We have has many good and bad experiences with several publishers over the years, as I’m sure have most other independent developers! With the exception perhaps of the original GOD games – it’s generally always been a fairly one-way relationship however and one where a developer has to be lucky to do well financially. Things have changed for the better recently however with several positives that swing things back in favor of the developer, Steam and digital distribution allow for the possibility of a developer funded title, online titles allow for a developer to sell directly to the public and of course App’s now allow anyone to have a shot at making a hit game…

GiN: Now you’ve taken that Stronghold magic online, with the release (in beta for now) of Stronghold Kingdoms Online, a game we previewed here at Gameindustry.com and absolutely loved. What about the online game do you think will help it rise above the competition-filled universe of free-to-play online titles?

Bradbury: I think that we take a very different approach to the vast majority of free-to-play games. We come at it with the idea of making a deeper, more old school strategy game rather than a quick and easy casual game, designed to attract as many non gamers as possible. This means our market is not in the tens’ of millions like Zynga, instead we are hoping to attract a few hundred thousand strategy gamers and make games that both we and they enjoy! Stronghold Kingdoms is our first such game, but we will be using our long history of making strategy titles to make slightly more "hardcore" online titles.

GiN: Finally, we can’t let you go without mentioning Stronghold 3, which is currently due out very soon in October! We’ve looked at the graphics and they are truly amazing, but in terms of gameplay, can you tell us what we can expect out of that game, especially in comparison to the original, Stronghold 2 and Crusader?

Bradbury: Stronghold 3 will be much more like the original Stronghold in terms of gameplay with some of the best features carried over from Stronghold 2 and a few new nice tweaks and advancements. It will also look a load better with a brand new engine with great dynamic lighting, weather effects (-10 popularity for rain!) and night-time sieges. It will also introduce Havok physics, which really adds a lot. It isn’t Crusader 2 however, please check back on us next year to see if we have any more info on the Crusader franchise!