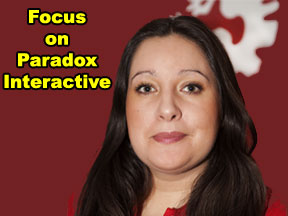 There is, of course, more to this industry than just the United States and its market. GiN has always been an international publication. In this series of interviews Publisher Nate Wooley puts the question to executives in the game industry who deal with international issues everyday. This week’s subject is Susana Meza Graham of Paradox Interactive. Graham has been with Paradox since 2004. After starting in public relations and marketing she now oversees the entire publishing business for this Sweden-based firm.

GiN: How’s business been? What new release are you most excited about?

Graham: Business is better than ever, our gross revenue is up 133 percent for the first 6 months. We’ve had our ups and downs like all companies over the past five years and there’s no question we’d be showing an even more aggressive growth without some of the bumps and external circumstances we ran into.

On the same token we’ve also learnt a great deal from the challenges we’ve faced. Today we’re in a place where we can finance and select the projects that we want to work with, not just projects we believe will make a sound financial investment, and that’s resulted in titles like Magicka, War of the Roses and Salem seeing the light of day and our internal development studio growing. Picking a favorite upcoming release is like being asked to tell one of your children you love them more than the rest. It’s impossible!

GiN: Are the challenges faced by European-based firms any different than North American or Asian-based game companies?

Graham: I know this is super cliché, but every challenge also poses an opportunity. While many European firms might be very strong in their home/primary market, very few, if any have managed to create a strong Pan European organization, not to mention global. Therefore market size alone becomes a bigger dictator of success than it should and that certainly makes companies more vulnerable. It also makes companies more dependent on the current financial climate.

GiN: How does marketing a game internationally differ from domestic marketing?

Graham: They’re two very different processes, neither of which can be ignored. The reason we became a publisher in the first place, back when we were a developer, is because we believed we could do a better job marketing and selling our products than the publishers we were paying. Since then, our strategy has been to work with great partners who know their domestic markets inside and out, while our core team works with product/marketing/sales strategies that can be applied globally.

I believe that’s one of the reasons our company took off like it did when the distribution channels opened up- consumers were able to relate to our products regardless of their nationality.

I’m always a bit skeptical of global companies who focus substantial amounts of time, effort and money into creating "country" specific campaigns instead of identifying the essence of a product or service and engaging consumers around that. In our industry, gamers are gamers and they have far more parameters in common than ones that separate them. But I realize this kind of thinking doesn’t translate as easily into graphs and numbers at Board meetings.

GiN: Personally, do you find the business of game development more difficult than a few years ago?

Graham: We entered this market the hard way, nobody believed that a niche games developer and later niche game publisher could make it in a global market. So there was a lot of fighting those first years. Today, our products still have an edge but they are more accessible in scope, focus and in platforms, and that combined with the boom of digital distribution that sees us getting a bigger share of the revenue quicker has made both game development and game publishing much easier for us. But in general terms, I don’t think it’s more difficult, I think the challenges have changed.

Whereas before it was challenging for game developers to get their product onto the market, these days it’s reaching visibility on a market that is flooded with everything from indie to AAA products. That’s the tricky part. It still surprises me how many "professional" game development studios are mistaken about game development. There’s absolutely no value in a great idea alone, the value lies in the execution of that idea, the final product, and whether the market knows about it.

GiN: What’s the next big thing? Any predictions?

Graham: Staying ahead of the game is always tricky, and if we’d been able to predict the popularity of iOS and Facebook we’d have probably been more active there. On the other hand, there’s a tendency for people in this industry to rush over to what is perceived as the “next big thing,” and like clockwork there’s then massive saturation and games of “buzz word bingo” in those areas shortly thereafter. Our next big thing is to do more online stuff, but not necessarily just MMO’s, rather things like connecting our players and giving them more opportunity to engage with each other.