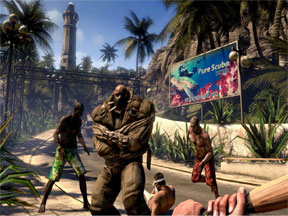 Dead Island is the latest entry in the white-hot zombie shooter genre. Only the emphasis here is not so much on being a shooter. It’s able to stand out from the pack with a deep storyline, lots of RPG elements and a unique setting. But it also has several notable flaws that might hinder otherwise enthusiastic zombie hunters. Even so, it’s probably the best zombie-hunting title released to date.

Set on the resort island of Borneo, you play one of four guests with a variety of different skill sets who are there for different reasons. You actually get a good deal of back-story on each character, as voiced by the character themselves. Each character also has unique skills that can be unlocked based on a weapon type. So if you like edged weapons there is someone for you and if you like firearms there is an appropriate character, though guns play a secondary role in Dead Island.

The game starts with a tutorial type level when you wake up in your hotel room and the zombie plague has happened while you slept. It’s implied in the intro that you got pretty drunk the night before, which might explain why you didn’t hear all the screaming as the dead killed and ate the living all around. A hotel employee sees you on the security camera once you get into your hallway, and directs you to safety, where you learn to do things like crouch under objects or how to smash open doors.

Once you get out to the beach, the game really begins as you take up residence with a group of survivors who need all sorts of help. The zombies of Dead Island are typical in that their bite will infect healthy people, but your chosen character is immune to this. So while you can still get beat to death or ripped apart by the undead, you are in no danger of turning into one with a scratch. That means that it’s up to you to try and save the survivors, and help yourself in the process.

Your first weapon is probably going to be a boat paddle, and you will quickly learn that Dead Island is all about hand to hand combat. This is a refreshing twist from the many run and gun titles that make up this genre. Fighting is also very simple. You simply aim at your opponent and swing. If you’ve got an edged weapon, you might try to slice off a limb or a leg or even a head. Blunt weapons seem to do better when directed at a zombie’s head, and since that was my character’s chosen specialty, I was often swinging to smash in their noggin.

Zombies in Dead Island behave a lot like you would think, with a few notable exceptions. Although everyone calls them zombies or "the dead" they still have some traits that would suggest they are alive on some level. For one, they bleed, and certain weapons can induce this, giving them a slow loss of health after a critical hit. They can also drown, which means a good technique in the early game is to head into the waves when you get swarmed. If you can knock a zombie down with a kick (an easy melee attack that every character has from the start) he or she will take drowning damage until they can right himself. And they are so clumsy that they often die before they can stand up. A few zombies can use melee weapons too, though if you knock it out of their hands, or slice off their arm, they aren’t smart enough to try and pick it back up. While most zombies are "walkers" which are the slow-moving typical kind of monster, there are a few special types like "the infected" which run really fast and "the thug" who moves extra slowly but hits like a truck. You also don’t have to destroy their brains to take them down, though it makes your work quicker. Massive damage will kill them too, just not quite as easily as cutting off their heads.

Graphically the game is beautiful, which is nice. The resort is gorgeous and your characters will sometimes even comment on this. And it’s funny to see zombies in bikinis come charging at you. Blood is everywhere too, and it’s really gross when you stomp on a zombie’s head to finish it off, pulping and splattering brain and sending goop everywhere. I had to do that about a thousand times, and I always looked away when it happened. The living people are rendered quite well too, with distinct faces and personality.

Different areas also look and play differently. Whereas the beach and resort levels are mostly open vistas, the second zone you come to is a city slum where suddenly everything is tight alleys and small apartment buildings.

The soundtrack for the game is really good. Background music sets the mood in some places, radios play real music and everyone you meet seems to have a voice, especially quest givers. There is a ton of dialog in the game. The only annoying part is that some people repeat the same things over and over again, which you will notice if you, say, use the same vendor a lot and he will tell you how he thinks aliens are behind the zombie plague every single time. Also, some quest givers will annoy you by asking "Is the job done yet?" only seconds after you’ve accepted their quest.

The gameplay in Dead Island is great, though this is where most of the flaws come into play. As I’m sure you know, most zombie games are episodes of running from point A to point B. This is true if you are playing a shooter like Left 4 Dead or scroller like Dead Nation. Forget that here. This is about as open world as you can get without going to a full-on RPG. The first zone you will land in is the resort itself, which is huge and consists of bungalow villages, the five star hotel, pristine beaches, long lonely piers, bars and nightclubs and a fairly large town area that was obviously setup to serve the resort. You will get quests from groups of survivors and also just random people holding up on rooftops, the barricaded back rooms of gas stations and shops, or stuck in obscure places like warehouses or within their wrecked vehicles. Helping people nets you experience and also blueprints to craft weapons.

The biggest problem is that the respawn rate on the zombies is both transparent and far too high. Case in point, I experienced a unique encounter on the beach where a zombie was trying to break into a changing room. I assumed someone was trapped inside so I bashed the zombie and then opened the door to help out. Only there was a second zombie inside that attacked me. It scared the crap out of me for a second. But not five minutes later, I passed by the same area and the same zombie was trying to break into the booth again and the other same zombie was waiting inside. It’s not as bad as Farcry 2 where you can practically blink and the world rebuilds itself, but it is annoying how quickly zombies come back when an area by all rights should be cleared, at least for a while. The other annoying thing is that the zombies rise in level alongside you, so you never really get to feel like you are becoming more powerful. If you cross back onto the early beach levels when you are in your teens and twenties, you will find that the zombies have also leveled.

Besides leveling up your character with new skills, the other focus of the game is your weapons. There are many of them here, from axes to hammers to swords to Molotov cocktails. Survivors will give you blueprints so you can upgrade your normal baseball bat into a nailed bat or even one that electrocutes or stuns enemies. You will have to find the components like lighter fluid, barbed wire and lemon juice to upgrade a lot of the weapons, but these are mostly abundant and you can carry an unlimited number of components. And weapons can also be upgraded at workbenches to improve their damage too. All that takes is money, which can be found on zombies and in containers. You will also have to repair your melee weapons from time to time, as they degrade with every hit. This was never too much of a problem. You can take a skill that makes the weapons degrade more slowly, and workbenches where you perform the work are fairly plentiful.

Besides melee weapons, you can also find pistols, shotguns and rifles. There are even parts of the game where you have to fight human survivors (not everyone was good before the zombie plague and they aren’t good now either). When fighting humans, a gun is your best bet because most of them also have firearms. Dead Island is not that great as a shooter, but does respect positional damage rules. In other words, if you get a headshot on a human, for the most part they will die right away. I also found that using grenades and firebombs works like a charm, as the living have much less resistance to those types of things as the dead. Firearms don’t degrade like melee weapons, but do have limited ammo. Mostly I used them only to fight other humans, which makes it easy to replenish your ammo, or against certain zombies that have to be killed at long range because they explode when they die.

There are also vehicles in the game that you can drive. They also tend to respawn, so if you take a pickup truck out and run over a bunch of zombies until you wreck it, fear not, another will be parked in its place where you got the last one. Vehicles tend to handle like tanks, but there is nothing better for clearing a road and getting to a destination without having to engage in hundreds of hand to hand fighting battles. Zombies can punch you through the glass though, and your vehicle can take damage, so be careful.

Finally, the multiplayer aspect of Dead Island is about the best I’ve ever seen. As you play, you are told when someone else playing the game is nearby. With a single key, you can join their game. Then the two of you can work together completing quests, and can even exchange items. You can set your local game to be private, meaning you will always adventure alone (but you can still jump in to other people’s games) or it can be public and others will come and lend a hand. There seems to be a huge community of players. I was never alone for more than a couple minutes unless I wanted to be, and a few times I formed a rather large group of elite fighters who rolled through even the toughest areas of the city. Call it easy multiplayer if you want, but Techland really got that aspect of the game correct.

I had a lot of fun playing Dead Island despite some of its flaws. There is no stupid timer to ruin your exploration like there is in Dead Rising, and the graphics here trump that game by a mile. Plus, the whole RPG "what would I really do here" angle is very compelling with Dead Island. There is a lot to see and do and strolling around trying to survive the zombie apocalypse is almost as much fun as completing actual quests. For those who love zombie killing games, and who really doesn’t, this one is the cream of the crop.