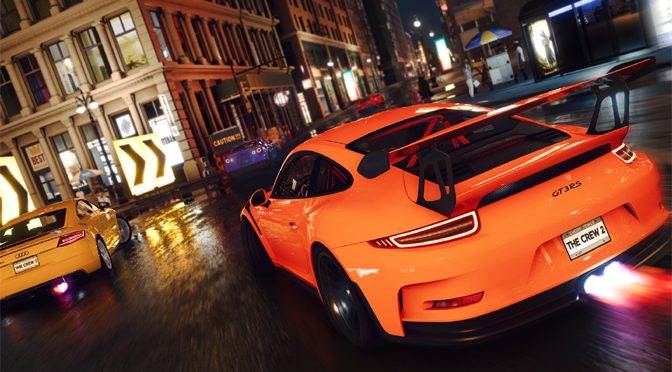 The first Crew game was a surprising oddity- a racing game with an explorable open world and a story campaign featuring an undercover cop in one of the more campy storylines this side of Need for Speed. The Crew wasn’t without its faults (it had a large number of issues) but garnered a fan base in spite of the game’s shortcomings. The Crew 2 seems to largely want to correct any and all perceived mistakes of its predecessor and capitalize on both players who enjoyed the first game and those who have never heard of a The Crew, let alone a piston. So, does The Crew 2 manage to outperform its competitor, or is it left in the corner, sadly stroking its gear shaft? Let’s find out. 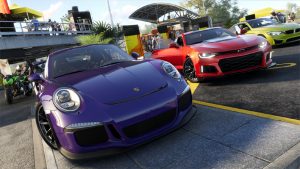 The Crew was somewhat known for having a strangely campy story about an undercover police officer investigating underground racing rings, but The Crew 2 largely does away with the story elements and chase sequences. In Crew 2, players will largely be completing bite sized competitions in various racing circuits until you’re seasoned enough to take down the best racer in each discipline, and that’s basically where the story both begins and ends. There are no curve balls, really. So, those who would be expecting some kind of story experience akin to The Crew 1 will not find such a thing in this game, as you’re largely racing to build up your popularity via social media followers that are measured numerically- that’s right, you have to race until an arbitrary number gets large enough that you can move on to the next category of races. 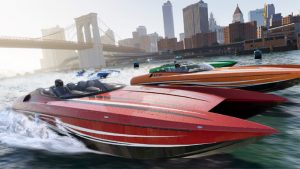 Thankfully, there’s a load of content in The Crew 2, in spite of the story shortcomings. More than just car races this time around, players can also participate in races with boats, planes, off-road vehicles, and even do stunt events with planes and monster trucks to achieve high scores in limited time as well. Planes take a moment to get used to as the first part of its discipline is aerobatics, which involves performing tricks in a time limit, while boat races are actually quite fun assuming you remember that you can go faster or slower by holding up or down on the analog stick (the additional speed gained by doing this counteracts the extreme rubber banding of the AI). Some players may enjoy piloting the planes, boats, or motocross bikes more than doing the monster truck or hyper car events, and that’s fine, as you can accrue followers to increase your rank no matter which discipline you play, so you aren’t specifically required to play anything but car events if you don’t really want to, but a huge portion of the game is playing with a large variety of vehicles, so if you’re looking for a car sim, The Crew 2 and its arcade-style game play may not be your best fit now.

There’s currently four disciplines in The Crew 2, each with a good number of races per discipline. Some will have you flying in the air performing specific tricks for bonus points, while others will have you venturing cross-country through diverse areas of the US wilderness (deserts, forests, swamps, etc.) to beat specific times. You can switch the vehicle you control at any time if you just want to drive or fly around in the open world and hunt for coyotes for a photo op, or you can elect to fast travel straight to the event you want to play, which can save a substantial amount of time versus having to drive to each  event location. While this does reduce reasons to drive on the world map, there are various hidden containers of parts and photo op moments players can complete to get a meager amount of followers or special loot parts to upgrade your vehicles. 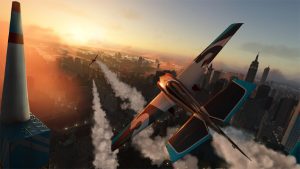 While on the subject of loot, customization options in The Crew 2 are huge: Each vehicle has a maximum performance rating that they can achieve (so some cars will just straight up be better than others if one has a max performance above another), but while building up to that amount you can equip parts you collect to each of the slots available on your vehicles to increase your overall speed, handling, etc.. Loot drops are colored gray (common), green (uncommon), blue (rare), and purple (epic). Rare and Epic parts tend to come with additional perks on top of their regular stat bonuses, which means that even when you hit max performance level, which means there is still some fine-tuning for completionists before your vehicle reaches a truly optimal state. Perks can range everything from obtaining bonus cash and better loot drops to increased nitro boost speeds and nitro regeneration, so finding strong parts with great perks is a huge reason to keep racing even after hitting the highest level of followers. A fifth rarity level in gold (legendary) is supposed to get released at some point in a free update in September, but for right now, there’s only these four.

Get your own crew together for some intense arcade racing. Grab a copy of The Crew 2 from Amazon!

Sadly, driving in The Crew 2 was actually my least favorite portion of the game, as they tend to have a few glaring issues that got more frustrating as I got more into the game. The car races (everything from street races to hyper cars), comprise a pretty significant chunk of the game, and can be a sliding scale from entertaining to overtly frustrating depending on a variety of factors. For some strange reason, The Crew 2 did away with the real-time guide on screen that told you where to go during a race, instead reducing it to a blue line on your mini-map that updates when you touch a checkpoint. Glancing at the mini-map while driving normally isn’t that large of an issue during street races since your checkpoints are close together, but finding out you turned on a wrong road during a 10 minute+ long race can be annoying. 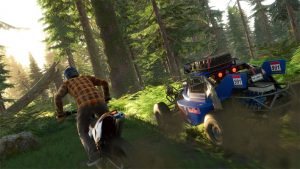 The line on your mini-map is cyan blue while the roads on the mini-map are gray, which makes the indicator somewhat difficult to discern while driving 150mph+ and trying to stay on track with no other visual indicators of where a player needs to be if the checkpoint indicator is a mile out. For example: You’re playing a cross-country super car race and your next checkpoint is half a mile ahead while a fork in the road is coming up. The visibility of the guide mini-map may make it difficult to determine which of the two roads you need to take to stay on ‘track’ because there is no visual cue to tell you otherwise, all while driving over 150mph. To extrapolate completely: The problem with relying on the mini-map for navigation is that it’s a light blue line on gray streets in the corner of the screen with no colorblind option in-game to make it more visible during game play. Why they got rid of The Crew 1’s directional guide is truly beyond my comprehension. 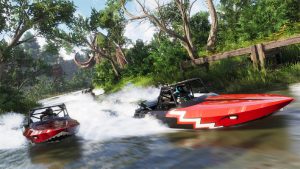 Visibility, overall, is a big problem in this game. When the in-game time of day turns to dusk in an area with few or no street lights, the game completely washes the screen out with extremely intense shadows that the headlights don’t even remotely help. This is especially bad in first person mode where the adaptive exposure/automatic contrast makes it nigh impossible to see where the road ends because everything but the sky is insanely dark. Add to this requiring players to repeatedly check the cyan-on-gray mini-map for driving directions, and you have visibility problems that can make the game irritating to play during in-game nightfall unless you crank up the gamma in the game’s settings. It’s confusing as to how this is even a notable issue, really, considering it’s not like headlights don’t exist in the game, because they do light things up. They don’t even need to cast shadows or be a true light source, but somehow the ‘night time’ filter gets drawn over top of the lighting for some strange reason. 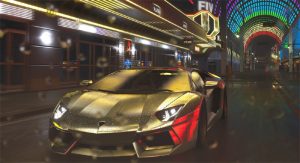 To add to everything else, there was a strange decision to leave PVP multiplayer out of The Crew 2 until a later date. While you can cruise all around the city and see your friends or other players driving around, you can’t actually interact with them in a meaningful way if you want to play against them. Symbols will pop up all across the map showing random accomplishments of other players- “xxBootychaser69xx made a jump of 252ft here” and things like that for you to try and beat, but they’re insanely quick and not actually challenges that provide you with any real reward (other than to message your friend and tell them that you, “Beat that booty” in a jump or something). Racing co-op is actually quite entertaining and can accommodate up to four players racing in a crew together, and as far as I could tell, everything in the Crew 2 could be played in co-op, and if any of the racers in the crew get into the top 3, all players get rewarded (so those struggling in certain disciplines can have other players effectively carry them through it if need be). 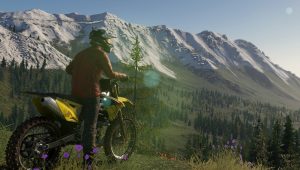 So, what it comes down to is this: If you enjoyed features of the first The Crew game, The Crew 2 can be a tremendous step back in all of the worst ways. People who enjoyed the story campaign of the first iteration, which story development is basically entirely absent from the sequel, will find little reason to push them to race. People who liked being able to race against their friends won’t really find anything to do as the update that’s supposed to bring PVP multiplayer to The Crew 2 is apparently not coming until winter of this year, which is mind-boggling. Fans of the first Crew game will most likely rate this one more harshly because of just how much Ivory Tower changed from the first game to the next, as players of The Crew were heavily invested in their cars and the open world, while this one adds features that can make car races more frustrating (like taking away the guiding line from the first game!). 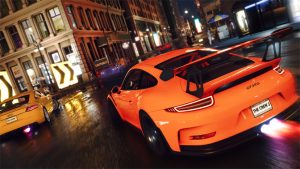 Overall, The Crew 2 isn’t a bad game, it just took a few very good steps forward in including tons of different vehicles to pilot that are a ton of fun, but then took some odd steps backwards in quality of life improvements as well as basically cutting out the entirety of the story mode. No longer being an arcade car racing game may also turn off players who have absolutely no interest in racing or performing stunts in planes or a river boat. There’s a reasonable number of events for each discipline, though if players completely neglect several of the types of races they may find a dearth of content to keep them busy outside of just loot grinding for the parts for their favorite vehicles. To reiterate, The Crew 2 isn’t a bad game, you just have to wonder who the game was actually made for, as removal of features from The Crew are baffling. Even so, The Crew 2 is a competent arcade racer and fun for those virtual drivers, and pilots, among us.