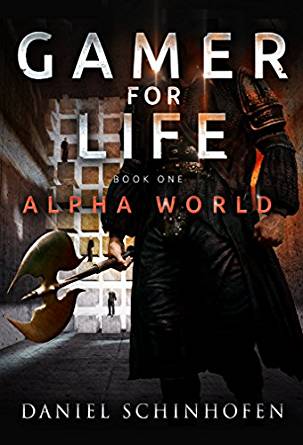 Hey all I’m back for this week’s Bookish Wednesday with another LitRPG. It’s Gamer for Life, Alpha World Book 01, by Daniel Schinhofen!!

Plot Synopsis: Seamus is facing life in prison without parole. While doing his time he’s given an option by the Department of Justice and the biggest virtual game maker around, Mindblown Entertainment. If he will help them test long term immersion he will get the chance to play the latest game from Mindblown, Alpha World. All he has to do is sign away his legal rights and sign an NDA. Now exploring Alpha World, Seamus becomes the Summoner Alburet….

Plot: The plot is actually really great, and deals with some rather heavy topics, including mental trauma. That being said this first entry is more about setting up the world rather than any of those more heavy topics. But I figured given the incredibly heavy nature of those topics, I should mention them in case people don’t want anything to do with a series that deals with them.

Characters: Alburet is a great main character, but the entire cast is pretty amazing. My favorite is probably Fluff though.

Overall: If you like LitRPGs, or series that deals with tough mental health issues, Gamer for Life is a must read.