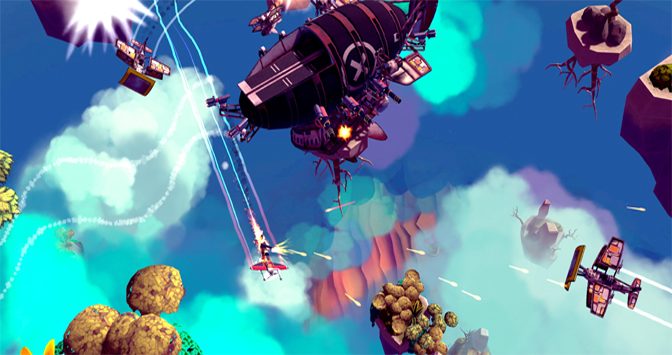 Airheart – Tales of Broken Wings is a lively twin stick shooter set in a bizarre and colorful world populated by pirates, airplanes and flying fish. So the whole thing is a little bit trippy, but also pretty fun if this kind of gameplay appeals to a player.

There is not very much story with Airheart, which is a shame because the cartoon-like world and seemingly likable heroine would seem to be tailor-made for a tight, interesting plot. Sadly, you don’t get much other than a brief cutscene at the very beginning of the game. The hero of the story lived on the ground with her father, which in this world of floating cities is seemingly the worst place you can be. So he walked across the desert and tossed her over a wall so she could become a citizen of the people who float. 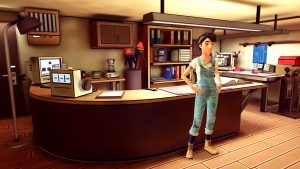 That’s it in terms of plot. Somehow the girl is able to purchase a floating garage and an airplane, even though she seemingly lives alone and has no means of support other than the airplane itself, but lets not think too hard about it I guess.

People in this world, at least those with airplanes, make their living by fishing. You see, fish fly in this world, and you can catch them by flying into them or shooting them with a harpoon. Some of the advanced fish in later levels can fight back, but at first its just a matter of chasing down the fish and scooping them up. Also, there is talk about a magic whale who lives in the last level of the game, at the very top of the world, who will shower whoever catches it with gifts, but it will be a long time before you get a shot at that.

The game world is layered into levels, with more difficult levels stacked on top. So the higher you go, the more challenging the gameplay, but also the bigger the rewards. Every level is divided up by these space elevator devices, which you need to sometimes wrestle control of, in order to be shot up to the next level. You can land anytime by hitting a single key, though this sometimes triggers a long spiral that is a little bit terrifying as you try to keep your nose pointed at the runway far below. 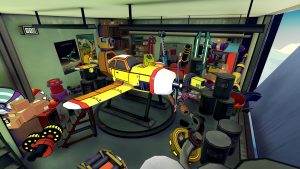 Every fish you gather is automatically converted into currency after a successful landing. If you crash or are shot down by an enemy, you still retain some of your cargo after the crash and your plane is healed in any case. You use money to purchase better equipment for your airplane, or even a better air frame itself. You can also collect raw materials, which can be combined with blueprints that you also need to find, in order to build some of the most impressive guns and gear in the game. 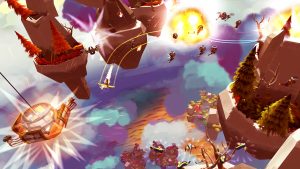 As you travel up to higher levels, you will begin to experience a lot of enemies. They are called pirates, but simply run around shooting everything in sight, not hijacking cargo. So they are really more like terrorists I guess, but the point is that you will need to shoot them down in order to clear a level and make it safe for fishing. These dogfights can take a long time, as both you and your opponents have a lot of armor and protection built around your air frame. 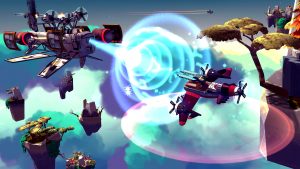 On the PlayStation, you use both sticks to maneuver and fire, with one pointing the direction that you want to go, and the other aiming the weapons. So basically a twin-stick shooter, right? Yes, but it’s also unique in that your plane is always moving forward. On the one hand, this makes targeting your opponents easier because as long as you have a clear stretch of sky in front of you (this happens less often than you might think in a world where islands, trees, buildings and everything else floats) then you can concentrate on aiming and shooting. 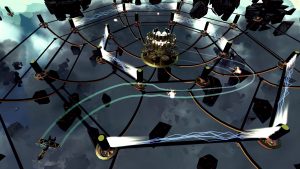 Personally, I found Airheart a lot harder to play than most twin stick shooters where you control the amount of motion and the speed of your character or vehicle. I found myself running into things a lot, or sailing off the end of the level, which is unmarked, and into an invisible border zone where you can’t see your aircraft, though it normally came back eventually. I found myself wanting desperately to slow my aircraft down to perform tighter turns or to navigate a particularly maze-like piece of floating terrain, but it was always full-speed ahead. A little more control would make the airplanes in Airheart a lot more fun to fly. Right now it seems like a pretty obvious two-pilot job being done by only one player. 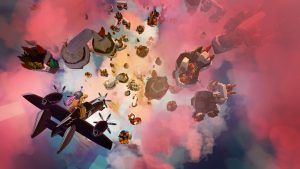 In addition to your guns, you also have a harpoon, which fires like normal but trails a chain behind it. If you are good, you can use the harpoon to grab pieces of gear off of your opponents, yanking them out and stealing them for yourself. You also have to use the harpoon on occasion to accomplish certain objectives, like dropping the metal plates around something you need. The harpoon is also useful for a lot of the boss battles, which happen every few levels.

Graphically, Airheart is very pretty. The world is certainly imaginative and almost dreamlike. It would be a very nice place to visit if it weren’t for all the people trying to kill you. The music is appropriate for the breezy airy theme of the game, though nothing really all that special. At least it’s not annoying. 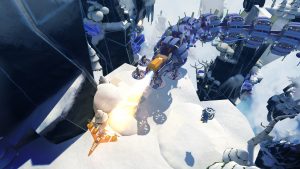 Airheart might have a rough time finding a wide audience. It would appeal to those who enjoy twin-stick shooters AND heavy crafting, but probably not to someone who likes one but not the other. The crafting part of the game, especially once you start using blueprints and collecting rare materials, is quite in-depth, and the combat is on the hard side with the difficulty ramping up very quickly. But if you are up for that challenge, Airheart – Tales of Broken Wings offers a unique world to explore, and quite a few options for building out the perfect cartoon combat airplane.