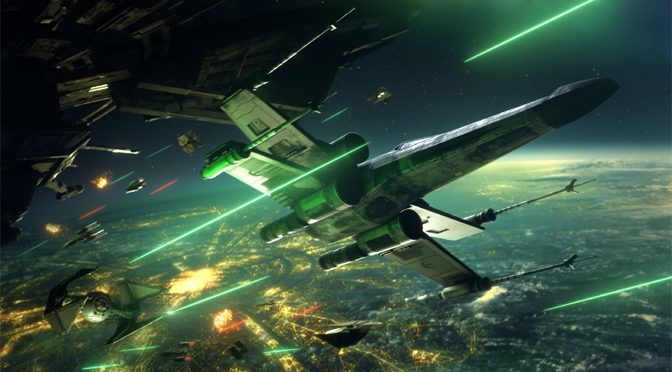 Back when I was in college, my friends and I used to play all of the Lucas Arts Star Wars flight simulations like X-Wing and TIE Fighter. They were a ton of fun, and offered many detailed missions to fly. Despite the graphical limitations of playing on an x86 PC, we would play for hours on end, battling the Empire or the Rebellion in rolling dogfights and surprisingly detailed missions.

There hasn’t been a lot of Star Wars starfighter games since those days. Yes, we did get a flight mission here and there in games like Battlefront II, but they were just not that great. In fact, those flying missions in Battlefront II were my least favorite of the entire campaign. 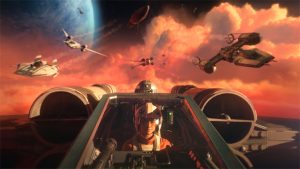 Now, epic starfighter combat is back in Star Wars Squadrons. Developed by MOTIVE and published by Electronic Arts, this is by far the most realistic space combat game ever created. This game looks so amazing that you can even play it in virtual reality on the PC or the PlayStation 4, which is without a doubt one of the most amazing videogame experiences you can have right now. 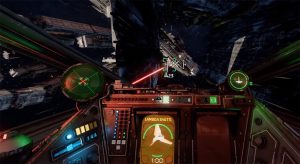 No detail has been left out of the iconic ships that make up the Star Wars universe. Every button, lever and switch that you have seen inside those cockpits from the movies are present in the game, and many of them have real functions to help you fly and fight. In VR, you can look around anywhere, and between the detailed cockpit interiors and the gorgeous expanses of stars, space gasses, suns, planets and sometimes debris, you might find yourself gazing off into the distance just taking it all in when you should be fighting. And when you get to slow fly past capital ships, wow, they look impressive and so real you could almost touch them. The audio is amazing too, perfectly adding to the Star Wars environment with music and sound effects.

The game can be played in normal, non-VR mode too, just looking at your monitor the normal way. That is how we played most of the game for this review, and the experience is very similar. It all still looks great, but unless you have a huge monitor, you won’t get the same “feel like you are really there” experience. But it’s still pretty amazing, so don’t let the lack of VR gear stop you from enjoying Squadrons. 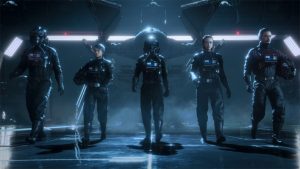 Star Wars Squadrons is designed to be a multiplayer game from the ground up. Unlike when those older Star Wars space flight games I used to play in college were popular, high speed internet and matchmaking technology is commonplace these days, so it’s no wonder that the developer would tilt their game towards multiplayer. This unfortunately weakens the single player experience quite a bit. I would have preferred if the game had a huge single player mode and the multiplayer was just an extension of that, but Squadrons was obviously designed the other way.

In terms of the single player experience, it’s not a total washout by any means. There are 14 single player missions, and the perspective alternates between an Empire Squadron and one that flies for The Rebellion, which is now rebranded as The New Republic. The game is set after the Return of the Jedi movie, so the Empire is greatly weakened, but so is the New Republic as its just getting started. So both sides have access to really good technology, but neither one really has the upper hand in terms of fighting a war of attrition. It’s a balanced time in terms of starfighter combat. Both squad’s missions center around the same mysterious project, with The New Republic trying to build a new super weapon (opposite the plot of most Star Wars movies) and the Empire trying to discover and destroy it.

On both sides, you get to know your squadron mates between missions in a series of dialogs. Sadly, these amount to non-interactive cut scenes where your character just sits quietly while your buddies talk about their lives or their concerns about an upcoming mission. I really wish that we could have some dialog here ourselves, perhaps answering questions or saying things that might lead to buffs or penalties in upcoming missions. But it’s basically just for show, and you can even skip them entirely if you want, just jumping into your cockpit to fly the next mission without interacting with your new friends if you want. I would not do that, but it doesn’t change the outcome of the game or mission structure in any way. 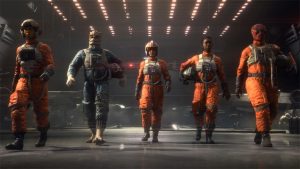 For people who enjoy single player games, Star Wars Squadrons will provide a fun experience that takes about eight to ten hours to complete. I’m not sure that is enough to justify the purchase if you don’t want to do multiplayer at all, because that is going to be 80% or so of what Squadrons has to offer. But what is there is pretty epic, with smooth controls, clever missions and plenty of Star Wars flavor. I just wish there were more single player to go around. 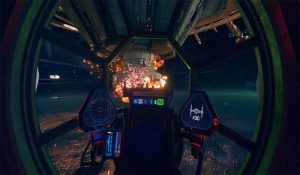 On the multiplayer side, the servers are just getting fully spun up, and there is already a robust community of players fighting for both sides. You can jump in to a quick match or participate in an overall set of missions called an operation. There are also challenges to complete like getting so many hits with a certain type of weapon and things like that which can be met regardless of whether you take up with The Rebellion (now New Republic) or the Empire. Fleet combat involves both sides squaring off against one another with the goal of destroying your enemy’s capital ships. 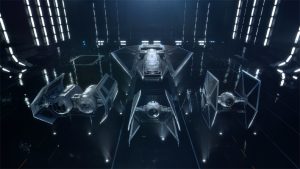 Like other multiplayer games, like Battlefield, you can play with live people or alone, with the AI simulating all of the other players on both sides. Of course, playing against computer opponents is not as exciting as flying against humans, and the computer always uses a very straight-forward strategy, but it’s nice to be able to enjoy this mode even if you don’t want to play online. It’s also nice to practice on various battlefields before jumping into a live game against real players. 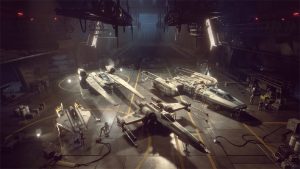 One of the coolest things is that you can earn some pretty nice rewards playing online like cosmetic additions for your pilot and your ships. Between the cosmetic additions and the actual weapon and defense loadouts, there is a ton of customization available, enabling players to specialize not just with the New Republic or the Empire, but also the type of ship they want to fly and also their specialized role in fleet combats. 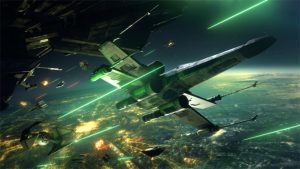 Star Wars Squadrons is a lot of fun, and I don’t think you could find a better-looking game right now, especially for space-based sci-fi. Those who love single player gameplay might feel a little shortchanged by Squadrons. But although the single-player campaign is a little short, it’s absolutely worth playing. Those who enjoy multiplayer, or who at least are willing to jump in and give it a try, will get even more out of the game, which is available for a surprisingly low price (currently on sale for $40 on Steam) for a AAA title. No matter how you look at it, Squadrons is not a game you want to miss.