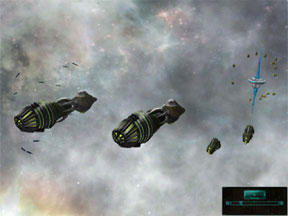 It’s been a while since we’ve seen a huge turn-based strategy game, and Lost Empire: Immortals is bigger than most. In fact, even for those who enjoy the empire-building genre, the game at first looks rather unassailable. The scope of the playing field is almost beyond belief, with up to 5,000 solar systems to colonize and conquer. A full scale game could take days to play, though you are able to setup smaller contests too.

The plot of Lost Empire is that the entire galaxy was once ruled by immortals, which were basically a super advanced race that had mastered technology that made them, effectively, gods. Only they were greedy and fought with one another, plus some of their subjects rebelled. In the end the immortals fell after a war that ravaged the galaxy. This makes room for six mortal races to take to the stars. Players will lead one of the six races as they explore and conquer the galaxy. There are even two immortals left out there somewhere, and when they find you they may ask you to ally with them. You can align your worlds with one of them or the other, or go against both.

Your biggest problem is that during the big war most of your race’s technology and advanced knowledge was destroyed. You are only now beginning to learn how to build spaceships once again, though thankfully the other races are in the same boat. So everyone starts off equally, though this equality changes radically once the game begins.

You begin with just an unarmed scout ship and a colony ship. And it’s a big universe all around you. Just looking at the star map, you realize that every little dot spinning in the void is an actual solar system with at least one planet you can claim. So the first thing you need to do is to move your scout ship over and check out some potential new homes.

Each planet has different resources or potential resources. A temperature planet might have a great agricultural base if you set it up like that, but might be poor in mineral resources, so it would make for a bad mining operation. Or a planet with a great temperature might make a fine metropolis, where you can breed new people which will be needed to further expand. Also, a planet on the edge between your territory and a potentially hostile race perhaps should be made into a fortress world to act as a defensive stop against a possible invasion.

There are six major (playable races) and over twenty minor ones. Of the six playable races, each is actually pretty unique. Not only do their ships have different characteristics but the beings that make up their race are also unique, with different abilities. This means depending on who you play you might get living ships that can self-heal, free cloaking devices or major buffs to diplomacy skills.

Diplomacy is actually a fairly large part of the game, though it would have been nice to see this expanded a little bit more. The enemy AI seems to turn down most proposals, even reasonable ones that are mutually beneficial. You can increase your success in this area by assigning a leader to diplomacy, though the buff only goes so far. Military conquest is still the easiest method of getting what you want, especially if you orient your empire in that directon.

On the military side, combat is both complex and simple. It’s complex because pretty much the battle is decided long before two opposing fleets come together. You can design your own ships, with some restrictions like the fact that battleships can only be built on planets designated as Constructor worlds. Beyond the template for the basic battleship, you can use technology you have researched to add extra weapons and ships’ systems to your unit. So you can make ships much more powerful and efficient than normal. You can also assign tactical roles to ships in your fleet, putting some in a support role, some upfront in battle, and some hanging back targeting enemy support and/or frontline vessels with long range weapons.

This of course loops back to designing a fleet that matches your strategy. I was able to make a robust battle fleet with frontline ships having huge armored hulls at the expense of weapons. They were backed up by lightly armored artillery vessels with huge technologically-advanced guns that fired at long range. The big guns in the rear were protected by fighters and patrol craft, just in case some little fast ships snuck through the front lines. Basically, the front line ships absorbed enemy punishment and had just enough weapons to hold the battle in place, while my rear guard annihilated enemy ships locked in combat. This worked pretty well until I met a race with the ability to corrode my front line ships with acid, which caused me to rework my strategy for battles with them.

Combat is also extremely simple because everything is pretty much decided before you battle. Once you go to war, you can watch your fleets fight in 3D, but have no control over them. They follow your battle plans, but you can’t change things on the fly. This might seem like a negative, but keeps the game from becoming a real-time click fest, something the target audience would not appreciate.

Graphically Lost Empire: Immortals is no show horse. It looks fine and there are a lot of interesting details like graphics showing a planet’s potential that look like they were pulled from the deck of The Enterprise (the spaceship from Star Trek, not the US aircraft carrier). But even the 3D battle shots are a little behind the times in terms of graphical excellence. They are not bad by any means, but don’t expect to be blown away.

The sound is perhaps the greatest weak point of the game. Generic techno-like music plays a lot and for no real reason. It would be nice if races were assigned their own theme songs or something, so at least there would be a reason for the tunes to play. It’s best just to turn the music off if that kind of musical droning bothers you. Ship sounds are fine, but it’s basically the same group of space sounds you have probably heard before. Thankfully Lost Empire: Immortals does not rise and fall based on its graphical engine or sound effects, but the gameplay.

Here is where Lost Empire: Immortals really shines. Despite having a huge universe at your disposal, which could potentially expand to 5,000 systems, the controls are rather simple to learn and use. The best comparison for this game would be Stardock’s Galactic Civilizations II, which has amazingly similar gameplay. Having played Galactic Civilizations, I didn’t even need to look at the manual for Lost Empires as the gameplay concepts are nearly identical.

The biggest difference is that Lost Empires has a much more simplified interface, especially in the research field. You can actually concentrate on the technology you want to develop here. So if you need to grow more food, you can research ways to achieve that goal like soil enhancements. Galactic Civilizations required me to study a huge chart of interlocking technologies, so that one would be based on certain levels in other fields. Here you can specialize if you want, which I think is both more realistic and also much simpler for the player. Running a galactic empire is hard enough as it is.

So you might be wondering why Lost Empire: Immortals was rated as Hard in our box score? Well, despite a good and clean interface, this game is not for everyone. A game like this can only be simplified so far before it starts to turn away the hardcore strategy players it’s aimed at. I think the developers have struck a good balance between complexity and simplicity, making things as easy as possible, but not dumbing it down for the Command and Conquer crowd.

This might bring in a few more players sure, but also I think hardcore strategy players will appreciate the slightly easier-to-use interface over GCII. Lost Empire: Immortals won’t appeal to everyone, but those that enjoy strategy on a massive scale will absolutely love conquering the galaxy, even if it might take several weeks of your real time to do so.