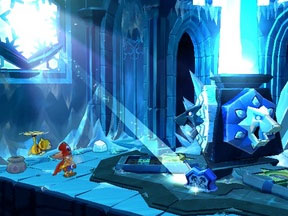 A young and free-spirited kid pirate named Zack, an enchanted morphing monkey sidekick named Wiki, and a long-eared, furry footed band of comrades who collectively called themselves the "Sea Rabbits?" You know nothing short of wacky is going to come from such a colorful cast of characters as this. But here’s the real kicker: This weirdly conceived puzzle adventure is actually very solid and I’d even go out on a limb and say a hair bit addicting.

The story follows the adventures of Zack and his magic monkey pal Wiki as they quest to pillage treasure from one opportunistic locale to the next. One day, after an unlucky ordeal of events leading up to them having to bail from an exploding plane they find themselves momentarily stranded in a deep jungle. Though things are looking a little grim at this point, the two manage to keep there pirate wits about them to stay out of present danger and stumble upon a rare magic treasure chest.

After breaking the enchanted seal, they discover the dismembered body of the infamous pirate Captain Barbaros. Well, at least his head anyhow. Alive, surprisingly, through means yet unknown and eager to reunite with the rest of his body the Captain convinces Zack and Wiki to search out the surrounding lands for his numerously scattered body parts and he’d reward them by handing them over his speedy and legendary pirate ship.

Of course, the two eagerly jump at this golden opportunity to own such a ship and, be it for the better or for the worse, thus their wild adventure begins to unfold.

Their quest for Barbaros’ treasure will take them through seven large areas with multiple sub-levels. There are a number of cool sights out there waiting to be discovered ranging anywhere from lush jungles and frigid ice temples to ancient castles and floating airships. A number of dangerous enemies and unique bosses stand in the way of undiscovered treasure and ultimate fame, but it’s up to players to make sure that nothing comes between the duo and their pirate destiny.

There’s no question that Zack and Wiki: Quest for Barbaros’ Treasure is not just your average adventure game. Every level of the game is actually played as if it were a giant puzzle with several key pieces fallen out of place, and through a series of trial and error players have to strategically use Zack and Wiki to gradually set things back in order.

As players begin to put the pieces of the puzzle back together they bring Zack and company one step closer to attaining their primary goal: access to a rare large treasure chest hidden throughout each level of the game. It’s a pretty simple concept that works quite well and is proven to be both a lot of fun and pleasantly challenging.

A second generation game developed for the Wii system, Zack and Wiki takes full advantage of the consoles capabilities and the results are surprisingly good. Movement is made pretty simple and easy. With just a point and click of a button you can send Zack to any accessible spot you so choose. While exploring if you see something that looks interesting or even a little suspicious you can again simply point and click on it to pick up or interact with it.

The game features dozens of hand motion moves that you will need to master before you finish the venture. When enemies come near you can shake the remote vigorously to make Wiki transform into a magical bell and sound blast your light work. Wiki’s magic bell abilities are also good for exorcising spirits which guard the treasure chests at the end of each level and turning living things into usable objects such as transforming a snake into a slither gripper to grasp items that would otherwise be a little out of reach or changing a centipede into a chainsaw to cut down trees to form homemade bridges.

When the situation calls for it, players will have to perform other animations like pulling levers, turning handles, fitting puzzle pieces into place, lighting torches, playing the flute and even fishing to name just a few. All of these unique elements combined make for a very fun and engaging game play experience.

The Sea Rabbits are also at Zack and Wiki’s disposal whenever needed to help make their venturing go a little more smoothly. Players can access the Sea Rabbits Hideout to get valuable assistance for most of their needs. "Johnny Styles," a high strung plane pilot for the group can get you anywhere you want to go and may sometimes pop up on the fly during quests to drop a helpful hint here and there. He’s also good for a few humorous moments.

"Dimmy" tends to keep his ears to the ground and usually has an interesting rumor or two for you to follow up on.

"Loafrey" lives up to his name most of the times usually loafing around but if you happen to have forgotten how to use abilities acquired from previous venturing he’ll be happy to remind you.

"Granny", sort of the momma of the whole group has more than a few tricks up her sleeves. She sells "platinum tickets" and "oracle dolls" which you can use when needed to revive on the spot or get key hints to help solve a mission. Finally, when you want to take on a new job you can speak with "Captain Hawk," the leader of the Sea Rabbits to get you access to new locales.

With more than 30 hours of game play, dozens of bosses and enemies to outwit, tons of treasure to search out and loot, and plenty of challenging brain teasers and puzzle based battles, Zack and Wiki: Quest for Barbaros’ Treasure is definitely one game worthy of any Wii owner’s library.

It’s an adventure that appeals to all age groups and that in itself is truly a feat. Even more so, up to three other players can jump in via the "Guide Cursor" to get in on the fun and help out with solving missions.

The average gamer might take one look at the name and say: "Naah, that’s not for me" but the next time you stop in at your local game store or rental shop grab yourself a copy of this very cool, very fun and engaging action adventure game for the Wii.

You won’t be disappointed. This little treasure box of a game easily racks up a very solid 4 GiN gems.