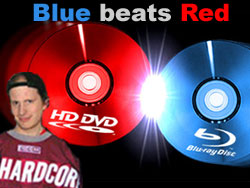 I've been meaning to write about this for a while but with all that has happened lately, including our awards announcement (and even though my Super Mario Galaxy write in campaign was a failure I was very happy to see a decent title like Call of Duty 4 get the Game of the Year nod.) We also had the Rock Battle between myself and our resident rock vixen, and a wonderful tribute by Chella in memory of the late Gary Gygax. But since Warner's announcement at CES of going Blu-ray exclusive that I wanted to give HD DVD a final send off.

As I said a few months ago when Warner made the decision to go Blu-ray only, it hit me pretty hard. Considering their strong track record with HD DVD, as well as providing five star releases in Batman Begins, 300, Blade Runner Final Cut, Matrix Trilogy, and the Harry Potter Year 1-5 box set, I thought that they would have favored the red side.

But I knew there was trouble when another Warner owned property, New Line, only mentioned their releases going Blu-ray, with no mention of HD DVD at all. And this from a company that claimed that they were going to release the Lord of the Rings trilogy on HD DVD. Wishful thinking I guess.

After the announcement, it was a massive domino effect. Netflix went Blu only, Target, Wal-Mart and Best Buy phased out their HD shelf space, and even Microsoft ceased production of their 360 HD DVD drive (which I owned and still enjoy.) But the final nail in the coffin came when founders Toshiba announced that they would cease the format altogether, effectively giving Blu-ray the final win.

Of course, all the Blu-ray fanboys constantly rubbed it in non-stop. Engadget HD couldn't help but remind us every day that Blu-ray won (and I'm sure right now Darren Murph is writing another piece on the end of HD DVD. Hey Darren, have you ever heard of the term "poor sport?") And in the end, even I gave in and bought a Blu-ray player in the form of a PlayStation 3.

But still, I feel that consumers wouldn't even bother giving HD DVD a chance. Just because studios like Fox, Disney, Lionsgate, and of course Sony only made films on Blu-ray they didn't see how advanced HD DVD was in comparison. By making interactive features mandatory, HD DVD was ready for the future.

Look at how Warner handled 300. The HD DVD version featured a full picture-in-picture feature of the film as it was filmed on green screen along with the main feature. And of course there is what Warner called the "In-Movie Experience."

All of their special features were provided as picture-in-picture in comparison to Blu-ray using supplemental footage. Whether it was Warner's IME, or Universal's U-Control, it was the interactivity that made me favor HD DVD.

And then there was when I got the Harry Potter box set. When I heard that a Web forum called Hi-Def Digest mentioned a possible web-based screening of Order of the Phoenix, I decided to give it a try, as I was curious to see how it would be handled. While at first it seemed like an on-screen chat room, the fact that someone was remotely controlling my player as we discussed the film was a work of genius. Almost like taking part in the MST3K of DVD. I was hooked!

And then the announcement"and it was all gone.

A few weeks ago I made my final HD DVD purchase: Beowulf Director's Cut. First of all I want to thank Paramount for offering me a final swan song and releasing Beowulf instead of pulling a Shenmue II. When I watched the picture-in-picture of the actors wearing those strange motion capture suits, I knew that this was the end of a good thing, and I can only hope that when Blu-ray profile 2.0 comes out and becomes standard, then I will be able to experience it again.

In the meantime, I made my first step at rebuilding, and picked up my first Warner Blu-Ray"I Am Legend. Already I miss the In-Movie Experience.