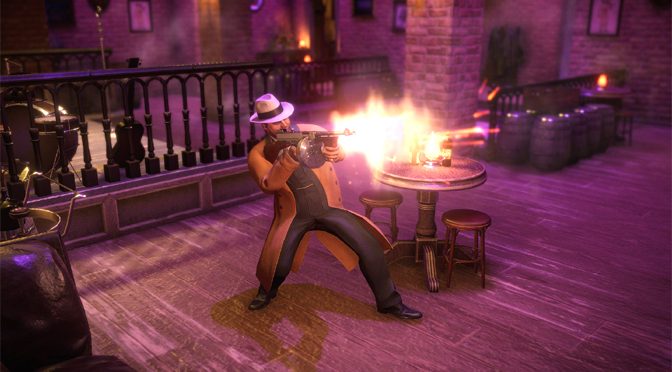 When you first start playing Empire of Sin, you will be mesmerized. The game world is beautiful and the setting, in the 1920’s during prohibition in Chicago, is a gangster’s paradise. It’s like every great gangster movie and TV show all rolled into one. Only you get to play the gangsters yourself and build your own criminal empire. But like the fate of most real gangsters, it all eventually comes crashing down for Empire of Sin.

Adding to the initial presentation, there are even historical gangsters like Al Capone to play, along with many lessor known people who were nonetheless famous, or at least infamous, at the time. One of the characters represents developer John Romero’s great grandmother, who was apparently a criminal mastermind back in the day. Each boss gangster has their own personality and special abilities, and choosing which one you want to play over the others can be a real challenge. 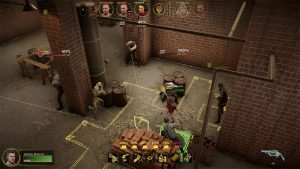 Once you hit the streets, you will be given a series of missions for your wannabe boss to follow. Most of these involve dealing with your past, or trying to do some special favors for politicians or associates. You will need to recruit gang members with special skills like brawlers, enforcers, demolitionists and guns for hire and then follow your initial quests around the city. Those missions almost inevitably lead to violence, which is probably something you expected coming from a gangster-centered title. 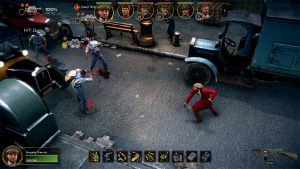 The turn-based combat is easily the strongest part of the game. It’s a lot like XCOM, and in fact, many of the character classes mirror the abilities of your squad from XCOM and the newer XCOM Chimera Squad games. For example, every gangster demolitionist can hurl a shrapnel bomb to soften up enemies, and can learn a skill where doing so on their first move does not end their turn, just like the heavy weapons guy from Chimera Squad. But I guess mimicry is the sincerest form of flattery, and most turn-based games get it wrong. Empire of Sin is just about as good as XCOM in terms of combat, something that so many other games can’t seem to master.

Your boss character is just like the gangsters that you recruit, only they have a lot more hit points, and some uber-powerful special abilities. The only downside is that to win the game, you will need to fight and kill all of the other bosses in Chicago, meaning you will run up against their special abilities at some point and will need to find a way to defeat them. 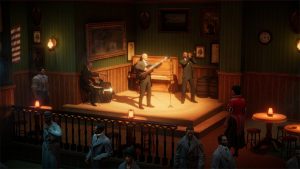 All of this is set against a beautiful backdrop of 1920’s era Chicago. The city looks real, with people walking around and cars and trucks out in the street. There is even a jazz soundtrack that perfectly sets the mood. In terms of atmosphere, Empire of Sin has got that and then some. And as a bonus, all of the voice actors for the gangster bosses sound great.

So if you are playing the initial parts of the game and thinking that you will be treated to an XCOM like experience with interesting missions to tackle, only with gangsters in the 1920s, then unfortunately, you will be close to hitting a pretty big wall. After you perform your initial missions and get established in your little corner of Chicago, the game turns into a management simulation, and a clunky one at that.

Every one of your businesses in the city, and you could have as many as 50 to 100 depending on the size of the map you are playing, will require special attention. Each has a set of ratings from one to five that you need to invest money (and time) in to improve. For example, each will have a security rating which is how many guards you have hired to watch the place, both inside and out on the street. If you get attacked and are not personally nearby, then the house guards will put up a fight for you. Depending on the business, you also need to upgrade their ambience, word of mouth advertising, how much “deflection” they have to keep the police from raiding the place and then specific things for that business like upgrading and adding new table games at your casinos. 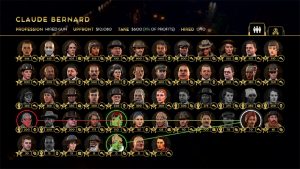 Since Empire of Sin takes place during prohibition, you will need to pay special attention to alcohol production and supply lines too. Breweries will make alcohol for you, and you can upgrade both their ability to produce a lot of product and the quality of that brew. Then you need to make sure that your speakeasys (hidden bars of the era) are getting enough supply. You even have to look and see what kind of alcohol the neighborhood likes and make sure that your breweries are producing it, and that your bars are set to sell it. Doing this across 100 businesses does not feel very much like a gangster simulation, more like a gangster accountant game. 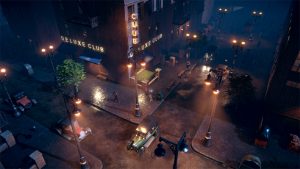 Empire of Sin is also pretty bugged, which doesn’t help. More than once a neighborhood’s alcohol preferences changed, so I went in and reconfigured my entire supply line to accommodate them. And then, not a minute later, it changed again, making all my work invalid. Preferences are supposed to be a month to month thing, but it can change every couple minutes, or even a few seconds apart. 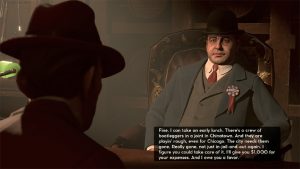 Some of the main quest lines for gangster bosses are also bugged. More than once I was told to meet someone to complete a quest, only they were not inside my safehouse where they were supposed to be. They just seemed to disappear from the game. While not quite game-breaking, it means that you wont get a reward for completing a long quest chain, and it will stay in your journal forever. I’ve also had instances where one of my boss’s special abilities could not trigger in combat. It was grayed out with no explanation as to why. 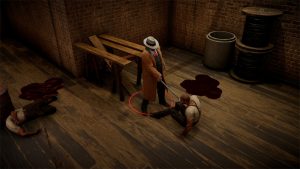 The Empire of Sin game could have been really great. If it would have stuck to advancing the main reason that everyone probably wants to play it, so that we could engage in amazing turn-based gangster combat, then it probably could have quickly become a beloved title. But adding a convoluted management and accounting simulation on top of that makes little sense. Unless you happen to find spreadsheets fun and exciting, there is no reason to include them in a gangster game. 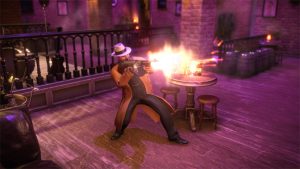 Empire of Sin is not a bad title, but it tries to do too much, and like the cheap liquor of the time, this waters down both the fun and quality of the game. At best, players will probably struggle with the “real life accounting work” part of the game just so they can get back to the fun gangster combat missions. But that will only last so long, making Empire of Sin a sad case of what could have been.