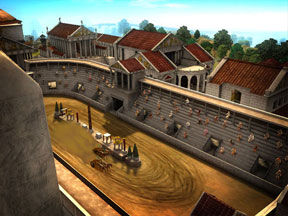 Launched without a lot of fanfare, CivCity Rome is a game that is aiming to fight its way to the top of the Roman heap. And given that it is up against longtime conqueror, the Caesar series and their new Caesar IV game, that won’t be easy. And let’s not forget Glory of the Roman Empire as well.

But let’s look at the developer’s pedigree. First we have Firefly, which made the extremely successful Stronghold series as well as the amusing if less successful Space Colony game. And teaming them up with Firaxis of Civilization fame, as well as Alpha Centauri and a handful of other best sellers, would seem to be a match made in heaven. Let’s see if it is.

Like most games in this genre, the action takes place in real-time with the player attempting to take a little patch of ground and turn it into a sprawling Roman city in a series of missions.

You start with your basic building, which is your town center. In a lot of ways, this is just like Stronghold and Firefly’s influence really shows. Then you construct some little huts where your people will live.

Each of the huts have certain needs, with the most basic being access to water. When you start out can build a well and once someone comes over to work it, lining up little clay pots, the residents in the huts will automatically grab some H2O and upgrade their homes. It’s not an instant thing, but takes place pretty quickly once the resident has a little free time to go grab a jar of water. You have to put the well close to the hut for this to work, and you can tell how close you need to be by looking at a little green shaded area around the hut. If the well is outside that area, the hut won’t upgrade.

Upgrading homes is your primary source of income in the game, because each house pays taxes. And the more advanced the house, the more taxes they pay. So you will spend a lot of money building farms and shops and temples and baths so that people can upgrade their homes and pay you more money. And you have to cluster your buildings pretty close together, which is sometimes just not possible because of limited space. Finding a nice balance between homes and services is a must, and one of the most difficult things about the game.

That money you make is generally spent on whatever your mission goal happens to be. Perhaps Rome wants you to increase the prestige of your city, or to grow a certain amount of grain for export, or to have a certain number of high quality houses. Generally there is a win and a loss condition for each mission. So you will have to keep a close watch on your finances and make sure you are constantly working towards your goals.

There are two campaigns that you can follow in the game. The first is the civilian campaign and it’s where you start. In that campaign, the challenges get more intense but the most you have to worry about is lions and other natural critters that come out of the jungle. These can generally be disposed of by watchmen in towers, though it would be nice if the guards were a bit more accurate. There are also fires in some missions, which require a fire tower and a nearby well.

After you have made a name for yourself as a civilian governor, you are visited by a member of the legion with an interesting proposal. To really get Caesar’s ear, you should join the military, building strong cities in war zones and conquering Rome’s foes. Thankfully, you start out small here, fighting off a few barbarian raids and the like, which is done by building a fort and supplying it with weapons like javelins and swords, depending on what type of legion you want to field. The soldiers will automatically show up if there are weapons for them.

Of the three main games with Roman themes on the market now, CivCity Rome is the best for the wargamer. Granted, this is not a wargame, but for a simulation with war-like elements, it’s pretty good. In advanced military campaigns, you can build walls and even send your troops out to conquer those pesky barbarians who are harassing you out on the strategic map. Mostly the battles you fight look like a rugby skirmish, with the side with more troops winning, but still, it’s fun and exciting to defend your hard earned ground.

Graphically, not much can touch this one. You can zoom all the way in and see what your people are up to, and when you get close the roofs on the houses even pop off so you can see inside. Also, the game lets you zoom out far enough to get a good overview of the action.

Couple this with some great sound and voice acting, yes voice acting, and you have a fun playing experience. Whenever you click on anybody in town they will tell you what they are thinking. They will tell you if they like the road network you have set up or the gardens or if they think the number of temples in the city is sufficient to keep back the wrath of the gods. The women will talk about makeup secrets or their favorite play in the amphitheater. If there is nothing relevant to say, they will tell you a story about ages past, or their missing brother who joined the navy and never returned. It’s all very well done and makes you think that they are all real people down there in your little hamlet.

The sound part of the game is like the rest of it, in that it is incredibly polished. When you build a wonder you will see a movie graphic pop up, very much like Civilization, a testimony to Firaxis’s part of the partnership.

There is even an educational component, and it is actually interesting. A civil encyclopedia can be accessed from any point in the game or before you start playing. The encyclopedia gives away many Roman secrets like how their doctors and surgeons worked or how they kept their bath water so hot.

And if you are in the game building a slave trader and want to know how much one would earn, you can just click one button and the relevant entry in the encyclopedia will pop up. There you will learn things like in adjusted dollars, a Roman slave trader made the equivalent of $400,000 per year, making them one of the richest people in the empire short of senators. Compared to the slaves they sold, which made between zero and $10 per year, they were kings, although by law, slaves did have to be provided meals by their owners. Rome was pretty fascinating when you look at how it ran, and I learned a lot about it just playing this game and browsing through the colorful encyclopedia. Anyone going through a Roman unit in school would find a benefit here, in addition to the great game.

Everything about CivCity Rome speaks to quality. If you are into city building or even want to learn about Rome, you can’t go wrong with this one. A lot has been said about the Caesar series and its dominance over the years. But we think that dominance may be at an end. Make ready for the CivCity Roman Empire!