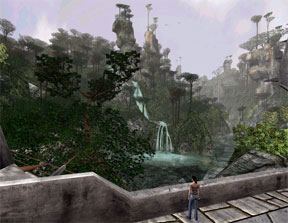 I’ve been sitting here speechless for the last month or so, and that is about the first thing I’ve been able to write in a review capacity in all that time. The experience I’ve had with Uru: Ages Beyond Myst is just that good.

Uru takes place in the Myst universe created by Rand and Robyn and company over 12 years ago. Since that time, two sequels were released, as well as a series of three quite decoratively-bound (the end-papers are a dead giveaway…) novels. While all met some rather mixed reviews, they all contributed greatly to the depth of the universe that is Myst.

Deriving from this quite extensive and distinguished background, Cyan Worlds once again takes the wheel of the franchise to bring us Uru: Ages Beyond Myst. And “wow” is definitely the word to describe it.

What separates Uru from all three prequel games is the fact that they made it an honest-to-God 3D, third-person environment. The first thing you do, even before the game itself starts, is to create your avatar. The options for body build, skin, hair, and facial shape allow for quite a few possibilities. My editor John Breeden swears he made one that looks exactly like himself. Since I decided I didn’t need to see my own self running around, I made one that looked a bit like me, but quite a bit thinner.

Uru begins as tradition demands, with a narrative by Atrus, the creator of the Age of Myst in which (hopefully) you started your journey years ago. While what he is saying is deliberately vague (as to not give any plot points away), that voice of Rand Miller’s (he’s played Atrus in all four games now) is just great to listen to. After the narration, you are dumped into the desert, and your adventure begins.

The keyboard commands are pretty easy to get used to, though integrating the mouse movements with this was a bit of a challenge for someone like me who sucks at shooters. If something is to be manipulated and you are standing close enough to it, the cursor over it will change to indicate you should click on it. Sometimes it’s hard to find the place you are supposed to be standing, or the spot where you are supposed to click, but the designers made enough leeway so that in most cases this is not a problem.

The puzzles start out as the common-sense sort (i.e. “Things that must be done in order to get the windmill working.”), but later turn into the sort that can only be solved if you have been very observant. And I mean very observant. When you go somewhere, look everywhere, and make a note of everything. Almost everything you run into will be a clue to some puzzle somewhere. And read the journals and notebooks you find in different places – while not all of that information is necessary to solve the game, it is all quite useful to gain more insight into the history of D’ni, which is as expansive as it is interesting.

If you are stuck at the beginning, a guide has been made available for you. His name is Zandi, and he lives in a trailer next to a volcano. I’m not kidding. If you are stuck, just make sure the last thing you attempted to manipulate was the thing that you are stuck on, and then go straight to Zandi. He turns down the radio (which constantly plays the Peter Gabriel song that is being touted about, even though that is the only place in the game you’ll hear it), and then usually tells you a hint that may help you. After a certain time (it will be apparent when), Zandi’s help will no longer be available, so you will have to rely on your own ability and powers of observation.

Once you get access to linking books, you will have quite a lot of freedom of movement, taking each age all the way through, or hopping back and forth and solving a bit at a time. Each Age has save points that you can link back to if you do try the latter method. And of course you always have a linking book with you so you can make it back to your base of operations at any time.

Of course, it wouldn’t be a Myst game if it didn’t have two things – breathtaking graphics, and incredible music and sound.

The textures in the 3D environments are nothing short of fantastic. It hardly feels like a typical 3D game, it’s that good. If you didn’t see your character actually running around in them, you’d swear that you were looking at awe-inspiring 2D paintings. The attention to detail and the rendering of the backgrounds and movies have raised the already-high bar that the series has always set.

The soundtrack is nothing short of perfect. The original music is well-wrought, and just right for the worlds it is representing. The sounds truly compliment the 3D environment, making them louder as you get closer to them, etc. The background noises are in depth, but they sound so…natural… to the world you are in that you hardly give them notice, which is a shame, because they are some of the best sounds in the game. Do yourself a favor, halt a few times in your puzzle-solving frenzy and just listen. You won’t be disappointed.

With a totally immersive environment and great puzzles, Uru: Ages Beyond Myst is the puzzle solvers Mecca. It wins a 5-Gem rating hands down.

Let me now take a few words aside from praising this totally praiseworthy game to discuss the recent development concerning Uru Live. I must say that I am quite disappointed to know that I will not be given the opportunity to explore D’ni and other worlds alongside other players connected through the Internet. At the end of every Myst game, I have always found myself wanting more, wanting to find out what happens next, and this time I was going to have my desires fulfilled. But alas, it was not to be.

Unfortunately, their major downfall was the fact that they were opening it up only to broadband users, and they claimed that they weren’t drawing enough players to make it work. I’m not so sure about that for two reasons.

First, I was kept on the waiting list for about three weeks before they closed it down, and never got in. I’m guessing I wasn’t the only one.

Secondly, I’m not sure what price point they were looking to charge, but I will assert that the kinds of players who want to play Myst online would be willing to cough up a bit more than a typical MMORPG does on a monthly basis. I know I would have.

Oh well. I just hope they try it again in the future. I guess I can keep myself occupied with the expansion packs (most of the content of the online world will now apparently be sold as expansions to Uru) in the meantime.