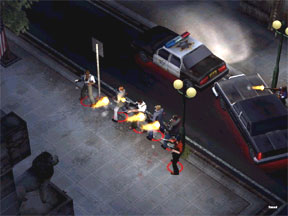 Gangland is one of the coolest and most innovative simulations to come out for sometime. Not since Stronghold have I been so enthralled with a simulation-type game.

The setting for Gangland is the mafia back in their heyday, where Tommy guns ruled the streets and different families warred for control of the various businesses within cities. The game itself is a bit of a mix between an empire-building simulation and a top-down real time combat shooter. You will need to have brains and brawn if you are going to survive on these mean streets.

Graphically, the game is incredible. The game world is comprised of Paradise City, a town that looks like you would expect New York or Chicago to look at various points during their history. Little Italian flags hand down from above. Neon signs promote dancing girls or night clubs. Grand hotels sprawl colorful awnings over the sidewalks. Even when the city is looking bad, with trash piled high in alleys or rusted-out cars parked on the side of the road, things still look good.

The single-player game is comprised of a series of missions following the story of brothers climbing the mafia ranks. What happens is that three brothers back in Italy kill a forth brother one night, then flee to America. Each of the three murderous brothers takes up a career in crime and becomes powerful mafia figures. The grandfather of the family however does not forget about the murder and sends the youngest brother, that’s you, to America with the mission of killing the other three.

You start out in America by looking up your uncle, who is all to happy to give you menial and dangerous jobs while you establish yourself. This part of the game is basically a tutorial where you learn how to take over shops, hire new people for your gang, upgrade your weapons and advance in levels. It is well done and not boring at all. It was only after the fact that I really realized that I was playing the tutorial part of the game.

And it is pretty neat what you can do within the city. Though you are often given linear missions like "kill this rival boss," how you go about that is up to you. For example, say you need to intimidate a gun store owner into working for you, which earns you so many new bullets every minute that can be added to your arsenal. To do that, you need to have a fair amount of cash because you can threaten someone all day, but you have to give them something for their efforts.

If you are short on cash, head over to your enemies headquarters to see where his bagmen are coming from. Then wait outside their stores for the poor sap with the big suitcase full of money to emerge. Gun him down and grab the cash. Then use that cash to buy your own gun dealer.

If you run into an enemy shop that is loyal to your opponent, rush in and prove to them that all that protection money they have been spending is going to waste. Namely you do this by gunning everybody in the store down. Then when a neutral shop keeper takes over, turn them to your side. Just be sure to leave some of your gang guarding the store in case your opponent tries the same thing.

You can even get married in the game, though you have to be a powerful enough mafia leader to have your own place before any girl will accept your proposal. Once you are married, you can have children. Depending on if your wife is sporty, an intellectual or a seductress, you will get a different type of kid, like one predisposed to be a lawyer or other mafia-helpful professions.

Kids can be annoying at first because you have to protect them. If your wife is killed, the kid ends up following you around all the time, which can be dangerous for them and you. It’s best to just keep your wife alive with lots of guards so you don’t have to worry about it.

However, if the child survives, they can become an under boss in your organization, sitting at your headquarters and managing the all the fine print while you run amok with your gang in the streets. Otherwise you have to divide your time between the two tasks. So children are certainly something to work toward.

There are vehicles in the game that you can drive. This is a nice addition to the game and makes it easier to travel long distances within the city without getting tired. You can put a fair amount of your gang inside a vehicle too, which both protects them somewhat and lets you drop them quickly into enemy territory when least expected.

The only real complaint I have with the game is that there are times when I would like to slow the action down. In a major firefight, it is difficult to select units and have them use their individual skills, take cover or make other strategic moves. You can do it, but it becomes more like a Command and Conquer type game and less like The Sims when this happens.

If you are looking for a fast-paced combat game with strong RPG elements, then Gangland is an offer you can’t refuse. The developer, MediaMobsters, have put a lot of time and effort into this title and it really shows. In hours of testing, we never found one bug or logical error and that is a lot in a title that is extremely non-linear in nature.

As for Whiptail Interactive, this is easily the best game they have published so far, and rounds out their game types nicely. Lets hope that Media Monsters and Whiptail stay together because Gangland is a ripe title for both sequels and expansion packs.