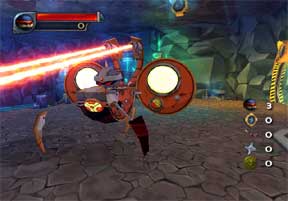 I-Ninja is another in what is quickly becoming a long line of hybrid games. Take a lot of Sonic, add a smidgen of Super Monkey Ball, give it a shake and you’ll have a good idea of what I-Ninja entails. Not a bad mix if the truth be told, but as with all mixed selections there are always the ones you don’t like, that get left until last. What begins as a merry melange of missions begins to grate on your nerves.

Our protagonist is Ninja, an angry, untrained rookie. Lucky Yoda’s not here, else he’d tell us what anger leads to – nuff said. Ninja’s a nicely designed character with Groucho Marks eyebrows, an over-sized head and a hint of Samurai Jack thrown in for good measure. He’s joined by Sensei, who is on hand to offer advice. In other words, talk to Sensei and he’ll give you a run-down of the job in hand.

There is a story, but it has no bearing on anything, so I shall spare you the details. The levels cover areas such as beach, jungle and a moon base. They act as a central hub to the missions and give you a little scene to run around and explore. Each level has a number of doorways, which Sensei opens when you agree to play a mission. The graphics are adequate and create pleasing, vibrant environments that offer Ninja enough of a challenge to keep him off the streets.

At the end of each mission, Sensei gives Ninja a grade. These add up to belts and the aim of the game is to get all your belts and finally become a full-on black belt, kick-butt Ninja – well in a Groucho Marks eyebrows, cartoony kind of way. Some of the missions are only available once you have attained a certain color belt, so your progress through the game depends on it.

The initial joy of the missions lies in their variety. Sometimes, it’s a race against the clock with some Sonic style gaming. Racing along rollercoaster-inspired tracks, Ninja will use his Power Chain to anchor himself on a 180-degree turn. Wall running also comes in handy, as does his hover blade, which uses his sword like a helicopter. Stealth missions are thrown into the mix and are usually so easy that they just delay your progress, as opposed to challenging it. Use Ninja’s various skills to sneak past robots and avoid their radars.

There are no real surprises in I-Ninja. Although boxing a giant robot is one of the more novel boss battles. In fact, the most enjoyable elements are the ones that borrow heavily from Monkey Ball. Rolling along treacherous tunnels, avoiding flames, columns and missiles – you know the drill.

As with all hybrid games simplicity is always overlooked, in favour of more STUFF. The combat is a prime example. Ninja has various advanced combat moves, as well as shuriken and darts at his disposal. This is all well and good if they work any better than the standard attack moves. The sad fact is they don’t. The advanced combos are inevitably usurped by the easier and more intuitive, pressing square a lot.

Don’t get me wrong, I-Ninja is fun, but as the game progresses the missions become a little repetitive. Once the initial charm of the mix wore off, I found myself less and less inclined to go back to the beginning of a mission when I died. Although it was a clever mix of Sonic and Super Monkey Ball, it was never quite as engaging and just made you want to play the originals. Not a bad game, but not a good one either. I enjoyed it briefly, but not enough to recommend it to anyone else. 2.5 GIN Gems.