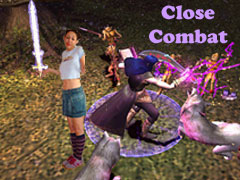 Back to back, surrounded by fiends on every side – co-operative play is the only way to go down. Cue Butch and Sundance style sepia-toned freeze frame, for that added element of pathos. Yep, if you're gonna go, then it's best to go side by side with a fellow gamer. Let's face it, co-operative gaming is the future.

Halo opened my eyes to the power of co-operative play and its ability to make levels endlessly replayable. Hours and hours are lost covering each other's backs and taking point whilst your partner takes out enemies strategically. Of course, you can opt for two-player mode and spend time hiding behind rocks and sniping at each other. It has its own level of fun, but nothing compares to taking a collective deep breath and stepping into the breach with all guns blazing.

The release of Baldur's Gate brought my gaming partnership with Konami Boy to the Shangri-la of co-operative gameplay. For an evening, we become adventurers and the citizens of Baldur's Gate depended on our every move for their survival. The perfect symbiosis of elfin sorcery and human strength made us a formidable duo.

Entering dungeons swarming with goblins and orcs, we would hang back and lure them towards us. I would fire an arc of lightning, whilst my fellow adventurer felled foes with a crushing swing of his battleaxe. It was glorious! The camaraderie made for an impenetrable defence against all the evil the Onyx tower could throw our way.

There's nothing worse than letting yourself be killed, whilst immersed in a stint of co-op play. The opprobrium felt at letting your partner down by a moment's disregard for your health bar – oh the shame.

Baldur's Gate II is the next instalment of our adventuring and once again, I stepped into the shoes of a master sorcerer, whilst KB became a cleric with the power of faith coursing through his veins. Unfortunately, our quest was short lived and our thirst for co-operative gameplay continues. We've resorted to playing it again, using two different characters.

There's nothing for it, but to search the horizon for new releases, featuring the next generation of co-operative play. It's true, we're insatiable, but it's okay because we have Champions of Norath to look forward to. Created by Snowblind, the team behind the original Baldur's Gate, Champions of Norath looks set to keep us off the streets for a while longer.

But once we've slain our last skeleton army and reduced another impenetrable fortress of pure evil to a pile of rubble, what then? Will we be reduced to looking on, whilst the other plays some other game that requires solitary devotion? Or worse, playing different games, on different consoles, in different rooms, only meeting in the kitchen for a snatched drink and a yoghurt for sustenance!?

No, I'll opt for a coterie every time; no need for a retelling of events because you experience the highs and lows of gaming in perfect synchronicity. Imagine how many expansive RPGs could suddenly become instantly more digestible with the inclusion of a co-op mode. A problem shared is a problem halved, so the old adage goes. Never a truer word was spoken.

I urge you dear playmates find a partner and indulge yourselves in the joys of not trying to shoot, kick, punch the living crap out of each other. Instead, you can revel in the power of affiliation and become a foil, creating a perfect union of gaming prowess. And when one partner's spirits are flagging, the other is always there to egg them on and persevere against all adversity.

Fortunately, co-operative mode is sneaking its way into more and more games. A world of collaborative gaming stretches before us, bringing with it, many harmonious evenings of fun.

The release of Pikmin 2 is just around the corner and with the new addition of a two-player mode I may just be able to persuade KB that the frustrations of the first game will melt away under our perfect collaboration. Then there's the unconfirmed announcement that Viewtiful Joe is getting a sequel. But that's not all. Rumour has it that Viewtiful 2 will support two players simultaneously. This is good news indeed, as Viewtiful was nails, but now it'll be a game shared, which means fun will replace a crippling difficulty level.

Apparently, Joe and a new character called Silvia will fight as a team, complete with the ability to perform dual combos together. Sounds like a co-op mode made in gaming heaven.

Co-operative gaming allows you to live out all your buddy movie moments in the comfort of your own living room. The ups the downs, sharing the loot, saving their scrawny ass from certain doom and riding off into the sunset together as the credits go up.