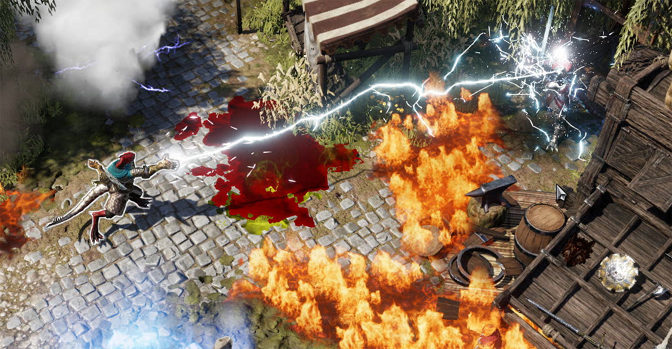 I realize that I am really late with this review, given that Larian Studios released Divinity: Original Sin 2 in late September. I have an excuse, though it’s a poor one. I started with this series playing the original Divinity title, and was very underwhelmed. With that one, the first town was extremely confusing as to which direction you were supposed to travel, with certain death and overpowered monsters in every other direction. Plus, the characters were flat, and the story was forgettable. So when I started playing Obsidian Entertainment’s Pillars of Eternity, it was so good that I forgot to go back and give Original Sin 2 a try.

Only, here is the thing, as good as Pillars of Eternity is, Divinity: Original Sin 2 is so much better. In fact, having dived deeply into the main campaign, I can confidently say that I know how I’m voting for RPG game of the year. Divinity: Original Sin 2 captures the magic of PC RPG gaming in a fantastic way. The world is gorgeous. The combat is balanced and extremely tactical. And the storyline is interesting, with engaging main characters and even a great supporting cast. 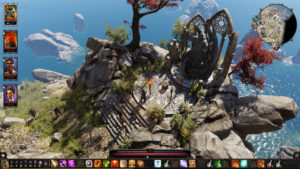 Right from the start, Divinity: Original Sin 2 does right by players by providing a deep character generation system. You can choose from one of five pre-designed characters, each with a deep backstory that will unfold as you adventure, or make your own from scratch. While the from-scratch characters don’t have their own backstory, they can still experience the many twists and turns of the main plot of the game, just with fewer set piece interactions with key characters in the world. Personally, I would recommend going with one of the main storyline characters. They are quite varied, so you should be able to find one that you like, and you spec them out pretty much however you like. 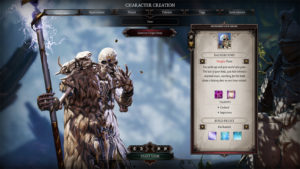 You develop your characters by adding points to their main attributes, a skills menu and a social skills menu. The main attributes like strength and constitution are standard fare for RPGs, with the one unusual skill being memory, which is required for loading up skills and spells that you will surely need during the game. It more or less acts like a point sink, something every character needs to invest in between levels that keeps you from having monster dexterity or another main attribute too high, too quickly. Skills are comprised of anything your character can do in combat to give them an edge, such as throwing their shield, casting a bolt of lighting or summoning a daemon to help you fight. You not only have to invest in the baseline skill area, but also must acquire spell books to learn new skills. Social skills are mostly utilitarian, such as picking a lock, bartering with a vendor, or persuading someone to come around to your point of view.

The plot of Divinity: Original Sin 2 is deep and twisting, and has a ton of political intrigue in it, with various factions vying for control of the world, and even the heavens to some extent. But from your point of view, you are a sorcerer who has been arrested and sentenced to serve time in Fort Joy, an island where the government is dumping sorcerers. You are forced into a source collar at the onset of the game, which prevents you from using source abilities. However, you still have access to all your non-source spells and skills, which is going to be 95 percent of your arsenal for a starting character. And by the end of the first chapter, you should have found a way to remove your collar. 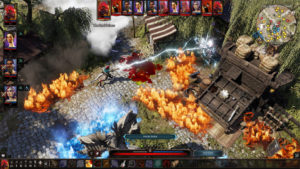 The gameplay in Divinity: Original Sin 2 is both deep and complex. You will meet a variety of people in your travels, including just wandering around your new prison island. Everyone that you meet can be bartered with, and you never know when someone picked up something useful that they might be willing to trade. Quite a few folks will also have something to say, with many of them actually voiced by actors. And you may want to talk to as many people as you can. Some will have quests, or let you in on secrets, which the game is packed full of, if you look hard enough. Many of the maps have entire zones of optional areas that you can explore that are completely hidden in dark caves or behind secret doors. You can spend a lot of time exploring these areas and going on side or even unrecorded quests, having fun and gaining power and finding loot that can be used later. 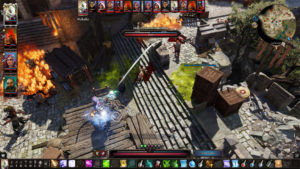 Combat is mercifully turn-based, centered around an action point system that makes everything extremely tactical. You have a set number of points to spend each round on your character’s turns. These are spent on movement, casting spells, swinging swords or using special abilities. If you have any left over, you can bank them for your next turn. Most skills like casting a fireball cost a certain number of action points, and then have a cooldown, in turns, before they can be used again. In this way, you can plan when they will be most effective to use against your opponents. Do you hit them with an area of effect blast now, knowing that the long cooldown means it may not be available later, or hold it until more of them group up?

Character perks can really help to enhance skills too, which makes character leveling part of the chess game that is combat in Divinity: Original Sin 2. For example, if you have a thief who is rich in backstabbing skills, giving her a perk so that she doesn’t trigger attacks of opportunity would enable her to scoot around behind opponents with impunity before bringing her poisoned daggers to bear. Or, if you have a mage that you cast a lot of flame spells with, giving them fire resistance will help to minimize the pain when they are inevitably caught in one of their towering infernos. 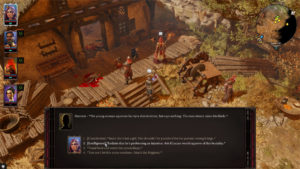 In terms of graphics, the game is gorgeous. Even if you are only able to play with medium settings, the world looks amazing. Bumping them up to their ultra-detailed settings is mesmerizing. In combat, spell effects like flame, ice, poison, electrically-infused steam clouds and even blood cloud thunderstorms are enough to make you pause just to watch it all. And every zone you visit in the lengthy main campaign has its own distinct flavor, details and of course secrets. Character models are likewise highly detailed, and gives players the ability to build up their team’s look into increasingly badass status. 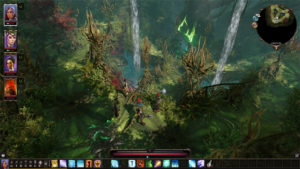 Unlike most games where sound is an afterthought, Larian Studios really pulled out the stops for Divinity: Original Sin 2. Many characters have a full voice actor backing them. This includes minor villains that you don’t even need to fight. I was shocked to have a minor bad guy suddenly want to talk before a combat, explaining his motives to me and engaging me in a little round of verbal sparring before our blades crossed. This is backed with great background sounds for each area like dripping water or faraway scraping and jingling sounds in dungeons, or bird calls and the sounds of the forest when traveling though the appropriate areas. The music is spot on as well, including the haunting main theme that sets the mood, combat music when things get violent, and mini-themes that are so well tied to certain areas, you may not notice them unless you stop and listen. 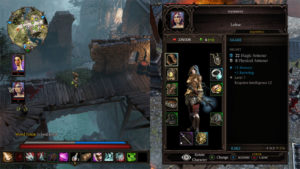 Kudos also goes to Larian Studios for allowing full modding of their game. There are tons of player mods on Steam now, covering everything from gameplay tweaks to new character classes to entirely new stories and dungeons that you can explore. Many of the mods that I have explored so far are quite good. And I used a few of them to modify the main campaign to make it a little more to my liking in terms of play style. It’s always great when a developer opens up their tools to fans. Not only does this endear the community to them, but its sometimes amazing to see what players can come up with. 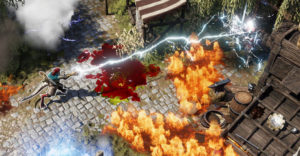