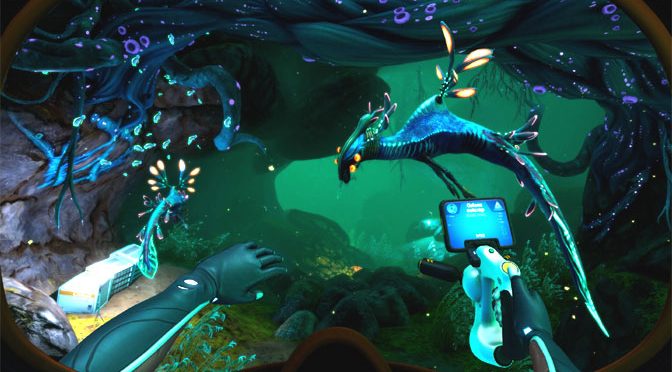 Crafting survival games are very much a dime a dozen on Steam, but the original Subnautica managed to stand head and shoulders above the pack by leveraging its usage of survival mechanics, unique diving environments and design, and otherworldly exploration. It was a surprisingly fresh take on survival games, filled with loads of alien creatures, both cute and horrifying. You were alone on an alien planet, and not only did you need to survive, but you also needed to solve the source of an extraterrestrial infection and find your own way off the planet- it was a refreshing departure from the norm in practically every way. Subnautica: Below Zero is a sequel that manages to outperform its predecessor in quite a number of ways, taking a more narrative-focused approach to the alien world survival game. 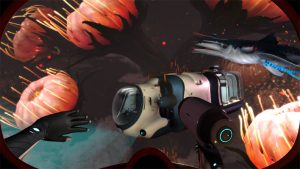 Below Zero begins with a very impressive cinematic of meteors approaching the planet on which the first Subnautica took place. Undeterred from the literal raining balls of flaming death, the protagonist Robin launches from a space cruiser and promptly crash lands on the planet surface, though she lands in the much colder Sector Zero. There’s a much larger focus on voice acting and character dialogue in Below Zero, as Robin’s purpose for being on the surface of the planet is to discover what happened to her sister, and while the protagonist in the first game never said a word, Robin is quite talkative and determined. 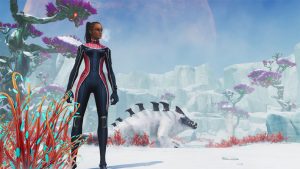 If you couldn’t tell, Subnautica: Below Zero foregoes the isolationist approach that the first game took, and now has more narration as the player explores, in no small part due to an alien downloading itself into Robin’s brain, rather than in her PDA as she intended. This alien consciousness, Al-An, speaks to Robin as you explore and helps guide the player, somewhat, toward resources to gather, or new parts to scan. Discovering new information, locations, and more can oftentimes prompt character dialogue, which is a stark contrast from the original.

Subnautica: Below Zero’s map feels considerably smaller than the original Subnautica’s, but it feels much more densely packed with lots more to interact with and gather. There aren’t really any large, empty connecting passages for a Cyclops to fit through (a large submarine) or large rooms with just one or two things to gather, like were present in the original. It’s a change that can be either a positive or negative, as it seems like there’s always something within the player’s immediate grasp to gather, scan, or fight, but the run time of Below Zero is a bit shorter than that of the original Subnautica. 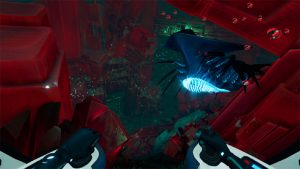 The gameplay of Subnautica: Below Zero should be immediately recognizable to anyone who had played the original, or even those who enjoy the occasional first person survival game. You’ll have to eat, drink, and regulate your body temperature while exploring both above and below the water’s surface. Players will find objects to scan that can be created in the fabricator, gather materials to craft the aforementioned scanned objects, then use the fabricated tool, upgrade, or other form of equipment to explore new locations. You’ll spend a lot more time on land in Below Zero, especially when you reach locations like the Arctic Spires. Of course, exploring and gathering materials for equipment to fabricate would make for a boring game, which is where the fauna of the game really come in to make things more interesting. 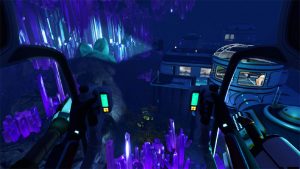 Peepers return from the previous game in an arctic subspecies, but new creatures like Penlings dot the map and go about their lives of swimming and catching fish as you explore. There are also things like the Squidsharks and Ice Worms, each of which can get the jump on a new player for a pretty startling introduction. This game has a fantastic way of presenting you with new things in ways that make you curious about them, but also enforce you approach with caution because there’s a solid chance they might just eat you.

Wandering into the Arctic Spires for the first time and discovering an aggressive alien life form approaching from directly behind is quite an experience. 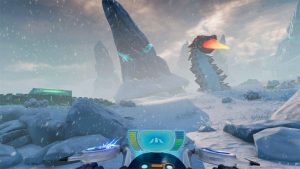 Building a variety of bases around the map to hold all of your materials, fabricated tools, and even vehicles will help you more efficiently get everything you need to explore new areas. The Prawn Suit from the original Subnautica returns, which encases the player in a reinforced canopy made out of pure, unadulterated bad ass and lets you punch rocks and other things that are not Penlings (don’t even try- they’re too cute). 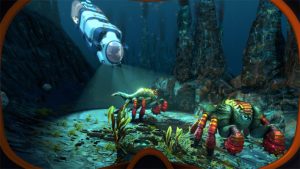 The Snowfox gives the player a fast-moving option for exploration on land, and can’t even be driven underwater, while the Seatruck gives the player a kind of mobile operations base, as you can attach additional modules that let you haul storage containers, a fabricator, even an aquarium module that captures nearby fish. The Cyclops submarine from the original Subnautica was a pretty over-centralizing vehicle in that, when you build it, there’s no purpose to visit your other underwater bases. This is an issue that the Seatruck avoids, somewhat, since these additional modules you attach to the back of the cab moderate what you can do with it. 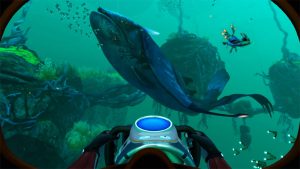 The visuals of Subnautica: Below Zero do seem improved in almost every respect from its 2018 predecessor, and the sound effects are great, as well. Some of the music tracks are spectacular- a personal favorite being the one that plays while in one of the crystal areas toward the end of the game. There’s a lot of convincing, rhythmic ambiance that plays in the background while you catch fish and craft expanded oxygen tanks and other things, and while much of it won’t cause you to leave your computer desk whistling the tracks long after you’ve clicked Quit Game, the OST does a phenomenal job of setting the tone without being boring. 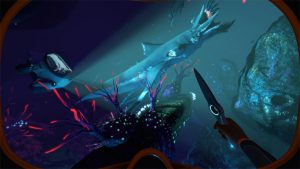 Subnautica: Below Zero does a great job at telling a story, whereas the original Subnautica preferred to relay its story in a more subtle manner, though Below Zero does suffer a little bit in the exploration department by having a much smaller map to experience. The user interface is substantially improved and you can pin crafting recipes for later use, among many other things that streamline the experience somewhat. There is a much larger amount of ground-based exploration, significantly more so than expected, but the core gameplay loop of Subnautica is alive and well in Below Zero, and this is absolutely a game that could easily be recommended to any fan of the first title.