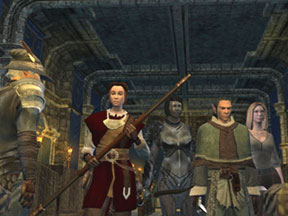 Oddly enough as a Dungeon & Dragons fan, I really only got into the Neverwinter Nights seen in the past year. I played the Baudur’s gate series heavily when they came out and I did play Neverwinter Nights for a while until I had to give my copy back to its original owner when the first expansion module came out. It was just this past year when I picked up the diamond edition that I really got into the expansions and the player created modules. It was with that level of interest in the first series that I hopped upon the release of Neverwinter Nights 2, and so far I have not been disappointed with NWN2. Some of the biggest improvements are fully controllable party members and your own personal stronghold.

The first and most important step in any role-playing game is to pick your character. NWN2 is based on Dungeons and Dragons 3.5 rules, and includes 16 races, 12 classes, and 17 prestige classes (the later require special conditions be met before you can select them, just like in D&D), all of which allow for quite a bit of flexibility. Not enough for you? Well don’t for get about the huge selection of skills and feats to choose from.

And of course your alignment and in general how you act in the world is up to you. Yes the later is important, because the other characters in your party, up to three of them, will react to you based on how you interact with the world.

The main story opens in the backwater town of West Harbor. Instead of walking you through the usual training academy, this time you are to compete is some different events. Each event naturally teachs you about combat, spell casting, and thieving skills among other things. Personally, I found this more interesting then the norm.

It takes a while before you actually get to Neverwinter city proper, but that is where the plot really gets interesting. You will meet some traveling companions along the way to Neverwinter and if you want you can ask them to join your party. If you do, they will chime in and offer opinions on how you should proceed. Ignoring their opinions might just cost you their loyalty, but if nothing else some of the things they say are likely to make you chuckle.

As I mentioned earlier, all of your companions are fully controllable. Just jump right into any of them to make them the active party member. Any time you are not in direct control of your character or any of your party members, you can guide their actions using a simple yet fairly complete, set of radial options including whether to open locks, disarm traps, remain stealthy, cast spells, use helpful inventory items, or even how close to stay to the active character. This does away with the radial wheel system of selecting actions for your character and for the other members of your party that was in place in the original NWNs.

Each party member has a complete inventory similar to the one in NWNs for the main character. It can be a bit of a chore to maintain, but if you take the time every once in a while to file things away in different sections so that you can find them when you need them it pays off in the end. Because all of the party members are now controllable, combat can be a bit trickier and a lot more tactical then it was in the original Neverwinter Nights.

NWN2 offers online cooperative play, and a revised toolset allowing players to create modules, just like in the first game. I looked today, and there are already several pages of modules out there on my favorite site. In cooperative play you can create your own password protected room and invite a few friends to join you in playing the original story.

Topping off this great game is a wonderful orchestral soundtrack accompanied by some fantastic voice acting. The battle music is augmented by the explosion of spells, the clash of blades, and the death screams of your enemies as they are sliced asunder.

Overall Neverwinter Nights 2 is a great title which brings together all of the wonderful aspects of the first game, along with controllable party members, your own stronghold, great background music and fantastic voice acting, and wraps it up into a single terrific package.