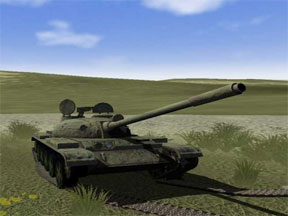 Gamers have a love/hate relationship with most sims. Really good simulations like Silent Hunter III can be commercial flops, while less good ones sometimes enjoy great success.

For the most part, the era of the hyper-realistic sim is a bit past. When computers were new, it was neat to see how well they could reproduce a real-life experience, even if the end result was nothing like real life. I must have wasted half a year playing Gato on the Apple IIe when I should have been doing my computer class home work.

It has been a number of years since a real military vehicle type sim has hit the market. All kinds of games call themselves simulations these days, from Stronghold (a castle sim) to First to Fight (a marine simulation). But real simulations are extremely realistic, to the point that they can sometimes be a bit dull. Iron Warriors falls into that category, though it can still be an enjoyable game.

You play a T-72 tank commander in Serbia and fight for the Serbs against the evil Croats in the 1991-1993 war in Yugoslavia. My first thoughts were, wait, wasn’t the Serb army the bad guys in that war? Didn’t Slobodan MiloÃ…Â¡ević lead them in genoside, or was that later on in the Kosovo war of 1999? Anyway, marketing a game set in a war most Americans did not understand or remember much about is proabaly going to be a strike against them right out of the gate, at least in the US. But we are talking about Russian equipment here, so they could not exactly put you on the side of NATO.

Eventually you get to drive the older T-34 and T-55 tanks, but for now, lets talk about the T-72. The old T-72s were some of the most powerful tanks in the world at the time they were built in the 1970s, sporting massive 125mm guns. The large 40 ton tank would get creamed by western armor like the Abrams M1 in later years, but the T-72 was aging at that point and really should have been in museums. Anyway, in its time, it was basically a medium tank with a very big gun.

The game gives you missions and sends you on your way. Often times you will be working with a task force or at least coordernating your efforts with other tanks and troops. And your enemy, the Croats, are very good. In a lot of ways, this game helps to show why the era of the tank may be on the way out on the modern battlefield. Guys with handheld anti-tank weapons can pop out of the tall grass at any moment, and unless they happen to miss (they rarely do) your tank is going to be in for a hurting. Concealed anti-tank guns are also a huge problem for you here, so you will need to keep your eyes open.

The game is extremely realistic in most respects. Everything from the pull of gravity on your shells to the slight warping of the barrel everytime you fire is modeled. If you want, you can turn most of the realism off by setting most tank functions to automatic. If you are looking for a little action I would suggest you do this, though the type of person who plays a game like this probably will want to leave all that on.

You can move between the driver, gunner and commander spots on your tank, taking direct control of any of those stations and letting the AI handle the rest. The AI is pretty good, so if you want to just be the commander you can, but you better be sure to spot all the valid targets out there because your AI will depend on you for direction. My gunner hardly ever missed and was a heck of a lot better than me most of the time.

There are a few things that I think are not very realistic. Your treads tend to pop off all the time, even when just driving down the road or over small hills. I searched the Web and found that while the T-72 had some performance issues, throwing its treads when crossing a bridge was not one of them.

Graphically, the game looks ok, but far from good. Having played first person games like Oblivion that approach real life or RTSs like Company Of Heroes might have spoiled me, but I was just not that impressed with the graphical presentaion. Part of it might be that the terrain is actually supposed to be kind of gritty and dull. We are not talking battlezone line art or anything, but don’t expect eye popping details either. If you are lucky enough to pop an enemy tank, watching it burn is quite good.

The sound is above average. My Altec Lancing headphones really rumbled when I fired the big gun, which was great. Also you will hear when you get hit, even if you are taking shots from armament that can’t kill you. And the voice acting (basically listening to the tank commander call out targets when you are not in that station) is pretty realistic, if repetitive.

My biggest problem with the game is not the realism (which can be somewhat controlled) but the vagueness. Mission briefings give you some idea of what you are supposed to do, but given that the Croats are apparently supplied by airdrops from God, you may be out of luck in the field without good intel. They have so much equipment I started to think we were fighting the US or something. Given what you are going to face, it would be nice if the mission briefing was a little more than a vague idea of what you are supposed to accomplish. Also, the tutorial is not that great when telling you how to operate your tank. And the game manual, while cool with pictures and descriptions of vehicles in the game, does not really help you become a better tank commander.

You will have to learn by trial and error, which drastically reduces the fun score.

If you are looking for a realistic experience and a lesson in why you don’t want to be a commander of a 30-year old tank in real life, then Iron Warriors is your game. Seriously though, only hardcore sim players need to apply. If you really like realism, then you will like this game. If you want to jump into the action and have a lot of quick fun, choose an easier title.