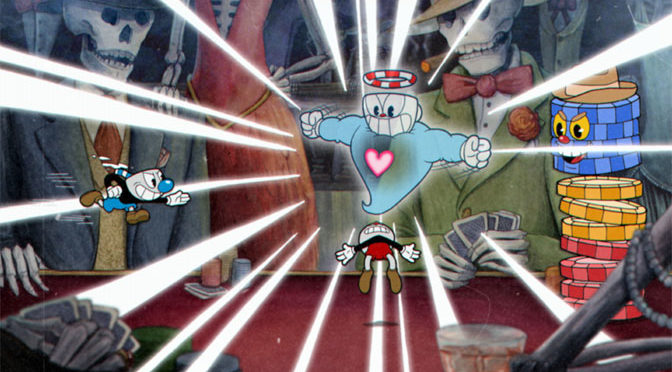 It’s safe to say that Cuphead has taken the world by storm. This groundbreaking indie title from developer StudioMDHR Entertainment was originally shown at E3 Expo in 2014. Then they went dark, even though people were going nuts about it. Finally released, it is charming gamers with its mix of throwback atmosphere and modern side-scrolling platformer action.

Despite being made with supreme quality, especially impressive for an indie title, Cuphead is not for everyone. In fact, there is a big danger that casual gamers might be wooed by the game’s cartoon-friendly graphics, high production values and generally good reviews, only to find that Cuphead is not everyone’s cup of tea. The game is unabashedly difficult, famously giving even some professional game journalists a very hard time at it. Reading the overwhelmingly positive reviews on Steam about Cuphead, one also finds a few cautionary tales from players who returned the game after trying unsuccessfully to beat the first boss for several hours. 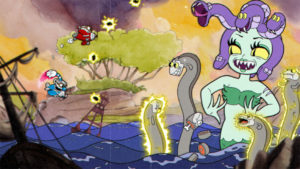 The controversy about the game’s difficulty reminds me a bit of my experience with Bloodborne, that ended in frustration when I couldn’t beat one of the first few bosses. There is a hardcore faction of players who wear completion trophies for difficult games with pride, but also a lot of others who simply don’t want to be bothered trying to invest in a game that is ultimately not a lot of fun for them. The difference I think from most of those types of games and Cuphead is that this game is pretty much difficult from start to finish, designed that way on purpose, but also very fair and challenging for those who enjoy extreme platforming. It’s certainly snagged its share of adoring fans, including GiN’s own cartoonists. And, it’s a $20 title, which not only shows that the developers are pretty nice people who are concerned about gamers getting good bang for their buck, (I’m looking at you Hello Games) but also makes investing in Cuphead a little bit less of a risk for those on the fence about it.

This review will cover the game in general, but also try to explain, and show through the magic of YouTube Let’s Plays, what players can expect should they go all-in on Cuphead. 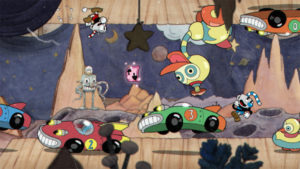 First off, the game is beautiful, but not in a modern sense. Cuphead is designed to look like one of those classic 1930’s era cartoons. Think Steamboat Wille, but in color. Those cartoons had a certain animation style that is easily recognizable, with all hand-drawn animation over watercolor backgrounds. Cuphead nails this perfectly. Little extras like scratches on the film in cutscenes are just icing on the cake. 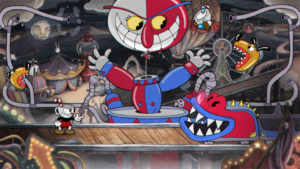 le feel just a bit uneasy with their cartoon violence. This has been addressed in other media as well, most famously in The Simpson’s with the long running Itchy and Scratchy Show putting old school cartoon violence in the spotlight.

Cuphead isn’t gratuitously violent, and isn’t even bloody, though its plot is somewhat adult in nature. Players take on the role of Cuphead (or Mugman in single player or local co-op). Cuphead literally makes a deal with the devil and loses his soul. Satan is feeling especially generous however, and agrees to let Cuphead go, so long as he travels out in the world and brings everyone’s soul who reneged on a deal back to him. So basically, your job as Cuphead is to fight a bunch of large creatures and condemn their souls to hell (or technically enforce a contract that they agreed to) so that you can save your own porcelain hide. Keep an open mind however, because Cuphead may still be able to do some good in the long run. 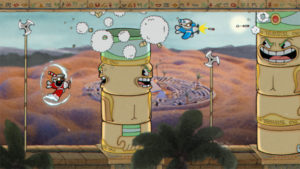 In addition to the graphics and themes of the old cartoons, StudioMDHR also nails the sounds. This is one of the only titles to bring in a full jazz band orchestra to provide original music for the soundtrack. Jazz is sufficiently chaotic and fast-paced to be perfect for a game like this, not only enhancing the throwback mood, but providing a nice soundtrack for the game’s two main activities, side-scrolling running type mini-games, and boss battles.

Cupman is all about the boss battles. Every alleged debtor on Cuphead’s list is a boss, and there are lots of them. So, fighting bosses is the core component of the entire game. There is even talk of DLCs where 10 to 15 new bosses will be added for those who have finished the main campaign. 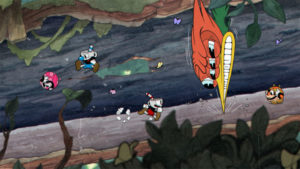 But to get to most of the bosses requires running sequences. These are played like most runners, only they are fairly difficult from start to finish instead of ramping up. Completing a run unlocks new areas, which leads to more boss battles. The runs are far less difficult than the boss battles themselves, but still challenging.

The core of the gameplay is, however, the boss battles. Bosses vary wildly in type, powers and even their environment. Some move all around the screen, some have minions that attack for them, and some bring along other bosses to help them fight. Many use their environment as a weapon, challenging Cuphead and Mugman to even get good enough footing to try and take a shot. And all bosses can take a hit, or several hundred of them. You don’t get an indication about how injured a boss is, they simply flash when a shot connects, which happens a lot. When you die you do get to see a progress meter that tells you how close you were to the end, or how much better, or worse, you did over your last attempt.

There are no difficulty levels in Cuphead. It’s just hard. When fighting a boss, you can choose a Simple option if you want, which makes things marginally easier. However, beating a boss in that mode does not advance the game’s story, so you can only really use it to practice and learn your enemy’s techniques. 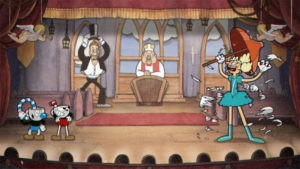 Cuphead is a beautiful and brilliant game, but it’s not for everyone. Those who enjoy a feisty, side-scrolling, boss-battling challenge will fall in love with the game’s graphical beauty and original soundtrack. Unfortunately, quite a few players not used to extreme, old-school and unforgiving difficulty will sadly be left behind. Then again, if you are up for the challenge, Cuphead does what it does better than most everything else.

One thought on “Cuphead Explained and Reviewed”