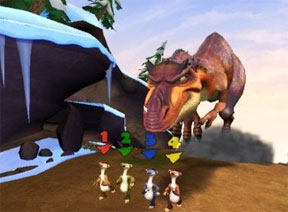 Ice Age: Dawn of the Dinosaurs

With the release of any kid oriented movie these days it seems that a multi platform video game also oriented towards kids must follow. Ice Age: Dawn of the Dinosaurs is no different. However this particular game seems to shine a bit brighter than some of its recent counterparts.

It’s better than most games like this for three reasons. First of all Dawn of the Dinosaurs is a compliment to the story and isn’t a rehash of the movie. Secondly, three of the major voice actors in the movie Manny (Ray Romano), Ellie (Queen Latifah) and Sid (John Leguizamo) lent their voices to the game. And finally the game play is really appropriate for the intended age range of the movie.

Mind you, two of those three can also be looked at as negatives. If you haven’t seen the movie, the game will not make a whole lot of sense as the game doesn’t rehash very much of the story from the movie. And Secondly, if you are outside of the intended age range for this game, you aren’t going to find it nearly as much fun.

The game starts out pretty fun as you play as Sid the Sloth. You go about getting ready for the impending birth of Manny and Ellie’s baby. This includes collecting gifts for Ellie and baby-proofing the playground created by Manny. During this time you also collect fruit which is currency for the store where you can purchase all sorts of fun upgrades. These early levels are not without enemies, as you get to battle hedgehogs while going about your missions.

Eventually you will get to play as most of the major roles in the movie including Sid, Diego, Buck, Manny and Scrat (and Scratte) as well as fly a pterodactyl.

The developers do a pretty good job of making the different levels non-repetitive, as in you usually don’t do the same thing twice right away. The one area where they completely failed in this is the egg rolling levels with Sid. Even though the path changes, the rolling of the eggs is fun the first time, okay the second time, and I just prayed for it to end by the third time. I don’t exactly mean that last thing as harsh criticism. Just explaining where I didn’t think they did the best job. Kids are a bit more forgiving in the repetitive gaming area, so they might not notice or care quite so much anyway.

As I said, this game is not exactly made for my age range, and taking that into consideration, I really think they did an excellent job of keeping the levels slightly challenging, fun, and engaging. As each level changes you are treated to a scene of some cave drawings and Sid and Diego telling some baby wooly mammoths the story from the movie. Personally I though this was kind of a waste. But I guess it does give you an idea of where you are in the movie. Again, if you haven’t seen the movie, some of the levels are just not going to make too much sense.

Besides the main story there are some multiplayer levels where two or four players can join together for some fun. There are eight different options, but my favorite here is the Sloth Barge where you try to knock your opponent off the platform while both of you move around on balls. All the different options are again perfect for the elementary school set.

Overall the graphics for this game look really good, but there are a few moments where things just don’t match up perfectly. I don’t think the kids will mind too much. And it is a bit of a shame that all the voice actors could not do the game, as some of the fill-in actors don’t sound very close to the originals.

Overall I think this is a really fantastic game to the little Ice Age: Dawn of the Dinosaurs movie lovers in your house. It’s just not such a wonderful game for the rest of us.