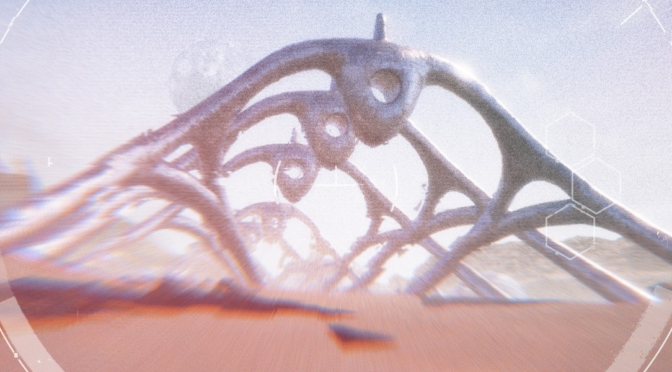 I’m sure we’ve all had at least one of those relationships where the other party looks so good on paper: great to look at, possibly entertaining backstory, and so on, right? But in spite of all that they somehow manage to drive you crazy anyway. Breached is pretty much like that.

The game opens with a black screen, and as text starts appearing and scrolling up, you realize that the character you are playing is being awoken from some sort of stasis. You learn quickly that some of the systems are damaged and you need to repair them if you are to survive. You have seven days before you run out of oxygen.

As a player you start off knowing next to nothing about who the main character is or what they have gone through. This “waking up with tabula rasa” thing has been done in games before, but with Breached you are further limited in that you can’t even see your surroundings other than three interface screens.

The first thing that you are shown is the log screen where your character is typing their thoughts for the day. After a sentence or two the typing will stop, and you can click on a word or phrase in the text to get the typing going again. Sometimes you are given choices of two different words, which may affect the next sentence or two, but won’t impact the game any.

After the daily log is done, hashtags will appear. Clicking on them reveals prior log entries from times before when your character was awake. Eventually, a story emerges that is moderately entertaining, though you do have to work to get enough entries for anything to make any sense.

Onto the actual puzzle that is the game. As I said, you have seven days to fix the problems before you die and have to restart. You need to do two things: fix the generator using spare parts and synthesize fuel out of alien minerals. You can fetch them both with drones, and work on them in the lab. The first day is in fact a tutorial that lets you learn what you can do.

The part of the game that you will be spending the most playtime doing is remote-piloting the drones to get the things you need to solve the game. You select the zone whose drone you want to interface (Day 1 you only have one to choose from, but afterward you have three), and then you take the controls. The acceleration, braking, and steering is all done through the mouse, and this interface is pretty easy to get a hold of after a few minutes.

This part is mostly where “beautiful” part of “crazy-beautiful” comes in. The landscapes you drive your drone around in are ridiculously gorgeous. The artists took the time to put in features that aren’t essential to the gameplay or the backstory, but are simply wonderful to behold. I could drive around all day looking at stuff, and fortunately you can, as there doesn’t appear to be a time limit or anything.

But there is your urgent mission (remember?), so eventually you will have to get the components and minerals. There are misplaced package delivery pods that you can salvage for parts. The three types of mineral (Alpha, Beta and Gamma) are growing out of the ground in various places. When you get close enough they will show in a heads-up display that tells you how far you are from them. To harvest minerals from a cluster or retrieve a pod you just need to come to a stop within a few meters of it. The drone can store up to three things which can be either one pod or the random quantity of minerals from a single harvesting. Then it is time to go to one of the retrieval points to get the stuff back to you.

I almost forgot to mention the weird magnetic disturbances that litter all the zones. Some of them are stationary, while others move about on their own. If you manage to touch any of them, you will lose contact with the drone, lose any cargo you had accumulated, as well as lose ground on accomplishing the tasks in time. Fortunately, they make really bizarre noises that get louder as they get closer, and while various ones have different colors, they are all weird glowy round things that you should be able to spot and avoid, easily.

Once you have stuff, it’s time to go to the lab. There you can cannibalize pods to get the parts you need to fix the generator. When you do, you also get the item that was being shipped, but none of those seem to be useful to your situation, so they are left in storage. Kind of like if Tom Hanks in “Castaway” put the ice skates aside and only used the box…to make parts for a generator…you know, nevermind. This puzzle is straightforward, as you know which parts you need (5, 10 or 25 each of three parts, plus one special one), and clicking on the pods give you an estimate for the three basic parts (low, medium and high) and a percent chance of the special part being in there. So if you only open ones that say “high” for the parts you need 25 of, and one of them has a high percentage of special part, then you are pretty much set.

The second task, the one of synthesizing fuel from the alien minerals, is a bit more arcane, and the major source of frustration in the game. Your task is to find the correct combination of the three minerals that produce the fuel substitute. A formula will always contain 9 total units, and each must be represented in it, but within that it could be any combination of values. For those keeping score at home, that makes for 28 possible combinations (since the third one is always nine minus the sum of the other two).

When you create a combination, you are given a percentage that supposedly indicates how close to the solution you are. So if it tells you it is 57% pure, for example, then you’ll need to try again by moving some or all of the values. Unfortunately, there doesn’t seem to be any rhyme or reason to these values. For example, in one of my attempts the solution happened to be 3 Alpha, 3 Beta and 3 Gamma. An attempt of 4-3-2 yielded a result of 73%, while an attempt of 3-4-2, which anyone would think would earn the same score, got something like 35%. Now, I may have taken my notes incorrectly that game, but this process has been exceedingly frustrating every run.

Now, here is the catch. Remember when I said you only had seven days of oxygen left? Well, each day you are limited in what you can do based on how exhausting the task is. For instance, on the first day you only have 70% of your spoons, and you are instructed to do one drone run which takes up 40%, followed by salvaging a pod which takes the remaining 30%. Most days you have 100%, which means you can do two drone runs, three lab attempts (synthesizing also takes 30%), or one run and two labs. That doesn’t leave you with a lot of actions before you run out of air and die.

If you do fail, you are allowed to restart. You’ll get revived again, go through the tutorial day again, and then are left to your own devices. However, the solutions for both tasks have been reset, so every time you are going back to square one. The backstory is revealed in the exact same order, with the exception of a few unlockable entries.

Despite it’s puzzles that attempt to make you feel like an idiot at times and its often lackluster backstory, Breached truly is an awesomely beautiful game with a great deal of challenge and a decent price-point. It still managed 4 GiN Gems despite the lower gameplay score.