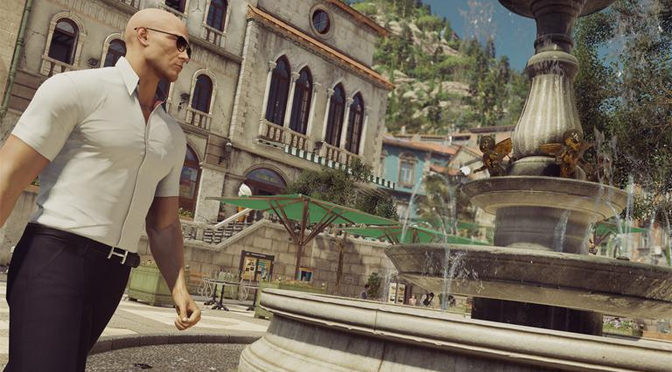 I know it took me a long time to review the Sapienza DLC. I mean, now the Marrakesh DLC is out. But you see, I have a bit of an excuse. Sapienza is so good that I kept playing it over and over again. I think that the team at Io-Interactive really got it right with this one, and I hope that the streak continues.

The biggest difference between Sapienza and the Paris level is the size. Whereas the castle in Paris was kind of claustrophobic and stuffed with people, Sapienza is much more open. There is even an entire living resort town built out around the main mansion where your targets are staying. For me, this opened up many more possibilities. In Paris, I always felt like anytime I tried to do something cool, there was always a guard nearby, or at least one of the hundreds of guests at the fashion show. It was really hard to sneak and do anything. Sapienza is so different.

This time you actually have three targets. There are two scientists working at a private home and a deadly virus down in a lab. All three need to be killed, making this the first time that a hit has been taken out against a virus I think. In fact, while getting close to the human targets is somewhat easy, killing that virus is actually the most difficult part of the level. Just getting to it in its underground lair is hard. Devising a way to destroy it without getting caught proved to be an even bigger challenge, at least for me.

The town itself is not just window dressing either, though it is amazingly beautiful. You can actually walk around the town and discover ways to infiltrate the compound by listening to conversations. You might discover that the main house is expecting a delivery, or that a doctor has been summoned, or that a private investigator is working for one of your targets, or that a new chef has been hired or that a scientist is paying her respects to a fallen colleague. Sapienza is bristling with opportunities in ways that I felt were lacking in Paris.

In fact, there were so many interesting opportunities that playing each one out is almost like playing a different level. Instead of being forced to go back and replay Sapienza, I really wanted to try new things. I wanted to see if I could disguise myself as a corpse in the morgue or to kill my target using an ancient cannon fired from a decaying old fortress. I kept replaying the level and quickly rose to mastery level 18 out of 20, whereas in Paris I pretty much quit around level nine.

[amazon asin=B01ENWJ4YI&text=Pick up the Hitman Sapienza DLC from Amazon as a standalone game for $10, or as a DLC for the main title.]

Even the little challenges that I have bemoaned about the series in the past were actually interesting in Sapienza, like hunting down and shooting five balloon alligators, or taking on the persona of a local priest without harming anyone inside the church. They were fun diversions and I was actually glad they were included. Plus they help add points to your mastery level which leads to even more interesting unlocks.

Also, the developers finally started deploying those elusive targets. In my previous review, I thought I was missing them, but they had actually not started. There have now been two so far, and kudos to the developers for letting us know that they would be arriving in an e-mail campaign and through various fan sites (and announced here at GiN). So I didn’t miss them.

In fact, I was able to kill both elusive targets and am very proud of that. It took a lot of surveillance to locate the targets, especially the first one, and then even more planning to figure out how to take them down. I did reset the game a couple times, which is allowed so long as you have not killed the target. Eventually I got them both and really enjoyed it. I just hope that they give us notice before the next one like they did this time. It would be a shame to miss out on the fun just because you didn’t know about it.

I was on the fence about an episodic HITMAN game after Paris. But Sapienza really stepped up the game in a big way. Given that the levels can be purchased episodically for about $10 each, I would highly recommend that anyone even remotely curious or interested in the game start there. It’s more than worth the money as a great standalone game. Then if you have a good time, you might go back and buy more levels. In any case, Sapienza will likely go down into the books as one of the top ten best levels of the HITMAN franchise. Let’s just hope that all of the future DLC is more like this one.