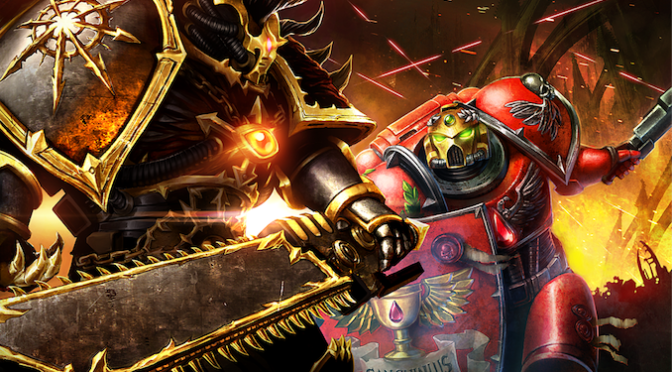 I am back with another Warhammer 40K game and this time its a squad based third person Massive Multiplayer shooter.   Warhammer 40,000: Eternal Crusade brings the Warhammer universe to players in a Massive Multiplayer Online format with both ranged and melee gameplay.  This game was fun to play but wasn’t as good as it could be.  There were  issues that made it feel too focused on one faction then an in depth Warhammer experience.  As with other Massive Multiplayer games where the game is just about battling other players it had little in the way of a story or plot.   Because of this I played mostly the PvP instead of the PvE as it was more exciting to just battle other players than move through the same Lair map  battling swarms of Tyranids.   At least the setting and factions are all based on the Warhammer universe and I thought they were creative in design.

In the game, players get up to four character slots to create their characters, one for each faction or multiple of one faction, there are no rules to how characters are created. Each character can be customized to player specifications with gear and weapons that are purchased using requisition or RTC. These are earned by playing games. Players have an option of four Warhammer factions; Space Marines, Chaos Space Marines, Eldar, and Orks. For my games I chose to create a Chaos Space Marine and an Eldar.   However, I play the Chaos Space Marine more and noticed I had better luck with queuing for games with this faction.  As you customize your character you will also pick one of five specialties. I choose for my Chaos Space Marine the Night Lords specialty, which specializes in psychological war, stealth, and terror tactics.

[amazon asin=B01LWWOSL2&text=Start your Warhammer 40,000: Eternal Crusade with a copy or digital copy from Amazon!]

Back to the character creation, each character has choice of loadouts before games.   Players do have the option of changing loadouts during a game to adapt to gameplay. These loadouts are chosen either from a custom loadout or preset. With a custom loadout you can edit the class, equipment, and appearance of your character. To get new gear you purchase it through the store or in the equipment window if available. Requisition or RTC is used to get new gear. The classes provide your character with different weapon and armor options. For the Chaos Space Marine all but the Aspiring Sorcerer and Havoc have both ranged and melee weapons. The Aspiring Sorcerer gives just a sword for melee and the Havoc is only a ranged weapon. There are also different backpack options with each class, for instance the Raptor gives a jet pack.

Equipment have choices for armor and weapons, but also consumables, grenades, trinkets, and a standard. In the appearance menu players chose a distinct look for their loadout instead of the default  from the preset loadouts. I do like the customizations in this game and the characters themselves are very cool. Once players have their character of choice and customized it is on to finding a game.

There are two options for finding a game, you can let the game decide by finding a random available PvP or go into the world map and select a type of game to play. In the world map there is the option called “Go to War”. Here a player can find a PvE mission or a PvP mission with the choices of “Grand Battle”, a match of up to 50 – 60 players on a large map with many fortresses and outposts or a “Skirmish Battle” that has up to 30-40 players and a smaller map. There are also options for training at a home garrison or competitions when available. Back in the world map players can also go to warzones by choosing to join a specific campaign. With the campaigns players can choose a faction they want to battle. unfortunately you can only queue up if players are in the specific warzone. I have found that the Space Marines and Chaos Space Marines always have players, the other factions have few people or no players playing.

There is also the option of forming guilds and playing guild vs guild competitions when available.  There is a good social structure to the game, so even if players find fault in the gameplay there is always the social aspect.

During PvP games players battle for control over the map by capturing and defending control points. All maps have three control points. However, based on if it’s a “Skirmish” or “Grand” battle these can be spread around in short or large distances. In the larger battles tanks make moving around and taking out enemy players convenient.  The best parts of this game are the choice between shooter and tank.

Though players are put into squads with up to five players when in a battle there are many squads playing at once.  It can get a little confusing but each battle is one faction against another.  So any teammate can assist and revive players of the same faction.  Your squad mates are highlighted in blue with other faction players in green.  Even though you may be in the same faction any teammate can injure you.  Be careful when playing, though you can forgive them. At least you do have an option of changing squads if an opening is available on a different squad.

Overall gameplay is good for each faction and I found that movements are not clunky, and weapons are easy to fire and easy to switch between melee and ranged.  However, aim needs work.  What I did find is if against the Space Marines and at a low level with very poor gear and not good weapons I died all the time.  The game balances once higher ranks are achieved and the right weapon is available.  Helps to have the best equipped players on your squad, and ones willing to heal.

During a game and if you are injured there are two choices, wait for a player to revive you as you slowly bleed out, or bleed out quickly and respawn. During the respawn players can choose where to respawn based on your teams captured control points. It’s usually best to go where the battles are or in the larger maps may find your self sprinting to the far end of a map to get to the other players. In PvE players must be revived by a teammate or you just go into spectator mode. There is no respawn in PvE. I have also found that it can take some time to respawn and queuing is slow. Besides the game imbalance issues, there are some issues with speed of the game queue, and respawn timing.

Even though the game gives little variety in maps, I did find some of the  battles entertaining and fun. If they fix the match system and give a more fair gameplay with the factions it would be an MMO that players can really enjoy. Space Marines have it made in this game but not everyone wants to play as the Space Marines.  There is a chat, which is good to communicate with fellow squad mates.   I thought the backdrops where great, very Warhammer. Tanks are a great way of rolling over and taking out enemies easier and also getting to control points faster.

I did find the game for the most part entertaining and the battles fun. However,  I also felt it could have used more work on the mechanics of the game and balancing out the factions and matching players on skills.  It is also a good game to pass time in and just battle people Warhammer style.