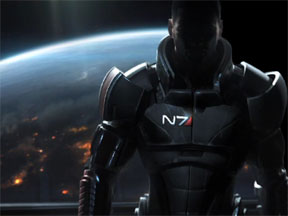 Warning: here there be spoilers. This review of the free extended cut Downloaded Content (DLC) for Mass Effect 3 will go over all four (yes, there are four now) possible endings for the series. While we don’t normally review simple DLCs, especially ones that really only add limited new content and a couple movies to the game, the controversy over how Mass Effect 3 finished, or failed to finish, warrants a look.

Many people who faithfully played all three games, plus the DLC extensions, were notably upset that all their supposedly grandiose decisions that caused sleepless nights came down to a multiple choice ending served up by one of most annoying NPCs to ever grace the screen. And even then, the three choices offered by the god-child didn’t make a lot of sense. Fans even created an indoctrination ending fantasy to try and explain it all. It was an epic fail on the part of the developers all around, probably one of the biggest failures in terms of storytelling ever made in the game industry.

The Extended Cut DLC attempts to rectify this situation. It helps to explain what is really going on with each of your three possible choices, and even adds a fourth possibility that a lot of fans were begging to have included. If all these extended endings had simply been there right from the start, I think it would have been a decent conclusion for the series. Not good, but not terrible. We still have basically three choices (now four) that don’t have anything at all to do with our years of work. Did you cure the genophase, make peace between the Geth and Quarians, pick Ashley or Kaiden to die in the first game? It doesn’t matter. The ending is what it is, and everyone will get one of the four standard ones.

The DLC changes the final citadel mission in some fundamental ways to make a bit more sense. Tiny things like adding shields to the marauder who tries to stop you from entering the portal to a cut scene where the fleet gets a message that someone made it inside, clears up a few things. The other major additions are dialog choices so that when the god-child tells you your three options, you can ask the questions everyone was screaming at their gaming machines before, like ‘What exactly does that mean?’ and ‘How would that plan even work?’ I have to say that so long as you accept that you are in a real place and not a dream world, then the explanations for the different options tends to make sense now. Not completely. But we are not left wholly in the dark either.

No matter which choice you pick, you are given an extended movie that plays after you see the Normandy crash land. This is a series of still pictures and animated clips that play while being narrated by different characters depending on the ending. It’s also possible that the little movie that plays after the credits will be altered based on your choice.

In terms of choices, the newest ending is one that didn’t exist before. Instead of picking one of the three endings, you can simply refuse to play the god-child’s game. This can be done by dialog, or the way I played it, by putting a bullet into his annoying head. At that point he stops sounding like a kid and instead his voice becomes a pissed off reaper, and he angrily tells you the cycle will continue. Humanity and the other races are destroyed, but remember you had a plan for that?

We are shown a beacon on some pristine planet, and down below the surface, a hologram of Liara tells everything she knows about the reapers and the crucible. Presumably the newer races can start planning for the reapers early, and defeat them. This is born out by the changing of the final movie after the credits, where we now see an alien woman talking with a child and saying how the previous races warned them of the danger and they were able to eliminate the reaper threat.

This is probably the most noble of endings I suppose, though you have to live with the fact that humanity is completely wiped out. But the war is ‘won.’

The destroy them all ending is pretty much like it was before, only we are told that yes, the Geth will die, but no, people with implants won’t. There is a movie for each of the three main choices that shows your lover, if you had one, putting your name on the Normandy memorial wall. But in the destruction ending they don’t stick it up. I think that implies that they think you’re dead, but aren’t completely sure. And of course if you got your galactic readiness rating up to full power, you see Shepard breathe at the very end, implying that you did somehow survive.

The control ending is also fleshed out. You are told that you will become immortal but lose your human form. Basically you become an AI construct, capable of manifesting as a hologram like the god-child, but that’s it. In that ending you become the Shepard god, enforcing peace throughout the galaxy. If anyone acts up, you send the reapers to clean house. It’s peace at the barrel of a gun, but peace nonetheless. The fact that the cut scene at the end of the credits still plays implies that the Shepard-god didn’t last forever. Either the galaxy got tired of being pushed around or Shepard decided he/she wasn’t needed anymore.

The final ending, the Synthesis one, seems to be the ‘best’ in terms of happy people and the least amount of life lost. It’s also the one that has the highest level of hocus-pocus and genre-bending science. Your DNA is spread throughout the galaxy. Everyone from every race instantly becomes partially synthetic and develops glowing green eyes. Synthetic creatures like the Geth or artificial people like EDI consequently become partially organic. The reapers, which are really the mashed up bodies of lost civilizations, share their infinite knowledge with everyone. So you have free people with unlimited knowledge all working together for the greater good. You even see reapers rebuilding London, and husks and humans stop fighting, like they can be friends now. It’s also implied that immortality is achieved one day because of the unique hybrid bodies everyone has, though Shepard is still dead. If you like your endings more on the Kumbaya-around-the-campfire side, this one is for you.

So where does this leave the series? Unless the destruction ending (with lots of galactic assets on your side) is chosen as canon, it would have to continue without Shepard. He’s atomized in the synthesis ending and a god-like computer in the control one. Plus, in both the control and synthesis endings, there are no more wars. With synthesis, everyone becomes a genius-level love machine. With control, unless you’re fighting the Shepard-god, there is no story. With destruction, the races would probably go back to fighting each other at some point, so there could be action and adventure that way. But I don’t know, my guess is that to make it really epic, ME4, if it ever gets made, will probably have to use the Mass Effect system, but be set in another galaxy or an alternate reality.

Back to the Extended Cut. I liked the fact that players are no longer completely in the dark as to what’s going on. There is nothing worse than to be shown an ending and still not understand what just happened. This DLC should have been part of the main game. So many months later, it can’t possibly live up the hype. That said, it’s not a bad way to finish things. If I personally had my choice of all three futures in real life, I’d probably pick Synthesis. But I know my Shepard would have chosen destroy. At least there’s probably an ending for everyone, or at least one that isn’t completely hated.

Since it’s free, it’s more than worth the download. However, I think the fan’s ‘indoctrination’ ending was really good too, perhaps better. I’ll leave you with a video of another fan ending, shown in Animal House epilogue style, because it shows what could have happened to each character, and James Vega’s fate helps to explain the whole ending controversy. Plus, we should all remember that it’s just a game, and probably not take things so seriously. Enjoy!