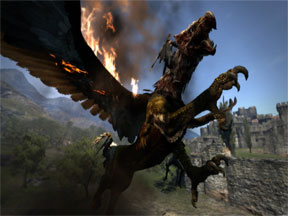 With the release of Skyrim, medieval games have a steep mountain to climb. When I looked over the case to Dragon’s Dogma, I was a little concerned about it being an Elder Scrolls knock off. I was pleasantly surprised that it had a different sort of mechanic and story flow, and a vastly different gameplay.

One really cool feature was the Pawn system. Pawns are human entities that come to aid you from a different realm. What is really cool is the ability to create and customize your main pawn. Your main pawn can actually go help your friends over the Internet, a nice touch I had not seen before. Create a really powerful Pawn and all your friends are going to be asking to borrow them. I made mine look a lot like my girlfriend, and gave her the ranger class. And no, you can’t borrow her.

My actual character stood above average in height and was the warrior class. One thing I noticed, and it bothered me, was the poor weapon selection for fighters. I didn’t knock any points off for it, but I’m noticing it follows the current trend of limited weapon selection in games.

The warrior class could ONLY use a sword and shield, ranger could ONLY use a bow and the mage could ONLY use a staff. I remember older games where even the mages had a few options. While it was overall irrelevant to the gameplay, it was still kind of disheartening that I had so few choices for my character.

When the game started I went through a tutorial mission with a character just to get a basic grasp of the controls. Overall the controls are easy to pick up and memorize. This is an action RPG, so expect lots of hacking and slashing.

After I completed that mission, it took me to the customize character screen. Under normal circumstances I worry about the complexity of this screen or the limited amount of choices. Dragons Dogma suffered from none of those. The screens were very easy to maneuver and work with.

When I finished, my character had a nasty scar going down his left eye. Medium length brown hair and an average muscle build completed the look. Unlike ninety percent of games where I played with this type of feature, I left the customize screen satisfied.

Following the customize screen it led into a cut scene. I was very impressed with the clarity and that all of my characters features (i.e. scars) were in the movie. All of the colors and background were really well done. Even when the dragon attacked the village everything was crystal clear and vibrant.

The game progressed like your normal action RPG. You kill things, gain levels and skills and kill bigger things. Boss battles in this game are nothing short of epic. At one point I faced a hydra and I jumped on one of its heads and was climbing all over it. Eventually I climbed up to the top of it and chopped off the head. This is because in addition to your standard attacks, you also have a grab feature. You can use this to latch onto any monster bigger than yourself, which makes getting to their weak points a real strategy. I repeated the climb to the head move until the giant hydra was finally dead.

Of course on the flip side, after I killed that monster, I walked down the road and faced a bandit that was stronger than the aforementioned hydra. That angered me how I’d slay a giant mythical beast just to be slaughtered by a small lizardman five seconds later.

The world of Dragon’s Dogma is pretty open. It’s not as large as Skyrim, but much more open than, say, The Witcher. In addition, there is a full day and night cycle. At night, the game turns into a bit of a survival horror title with more powerful creatures roaming around. Some quests of course need to be completed at night.

There are also lots of NPCs, and they all have their set schedules where they head to a tavern for some lunch or run their shops and then go back home when darkness falls. Everyone has a voice too, which is a nice and professional touch.

The plot of the game is interesting. A dragon rips out your heart, yet you live and are reborn as ‘An Arisen.’ Your overall goal is to find the dragon and get your heart back. Of course there is more going on behind the scenes than that, which you will learn overtime, but I don’t want to give away any spoilers.

Overall, Dragon’s Dogma is a definite must have title. With extensive game time and a well written story, Dragon’s Dogma proves that it isn’t just another Skyrim imitation. With just a point taken off because its really hard to survive in combat, it still earns 4 out of 5 GiN Gems, especially if you enjoy open world RPGs and a good challenge.